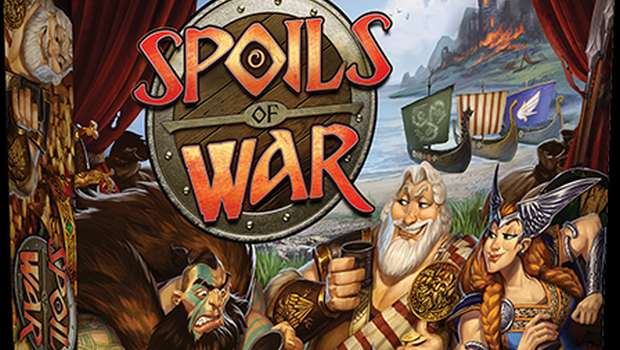 Arcane Wonders is most well-know for the Mage Wars series, although they also publish the games in the Dice Tower Essentials line.  They are expanding out even more now with a dice game called Spoils of War, which will be coming out next year.

Arcane Wonders® is proud to announce Spoils of War designed by Bryan Pope and Jason Medina. An exciting dice game of bidding, bluffing, and betting, Spoils of War provides non-stop gameplay that will test the wits of casual and strategic players alike!

The raid is over, and the victorious Vikings gather in the chieftain’s tent to divide the Spoils of War! Piled high on a massive oak table are the best treasures taken during the raid; gleaming gems, shiny swords, fine armor, and magical artifacts! Once strong allies, the Vikings are taken by greed, and soon a heated debate ensues –who will get what spoils? Fists pound the table, insults are made, and tempers rise! Let the Spoils of War begin!

Spoils of War is a fast-paced and exciting game of bidding and wagering for 3-5 players. Each round, players roll their dice, and then cleverly bluff and bet to outwit their fellow Vikings. The winners of each round get to claim fantastic treasures to add to their collection! With lots of twists and surprises, no one knows who will win until the last treasure is claimed and the spoils are counted!

“While designing and developing Spoils of War, the underlying goal was to make a game of high social interaction that we love to play.” says Arcane Wonders President and lead designer of Spoils of War, Bryan Pope. “We’ve been working on this game for a long time, and are confident that Spoils of War captures the fun and excitement our fans crave!”

Attendees of BGG Con this week will have the first public opportunity to play Spoils of War at Arcane Wonder’s booth and during several sneak-peek events have been scheduled. Look Spoils of War to hit shelves in April 2017 with a MSRP of $39.99. Gameplay is 60 minutes for 3-5 players ages 14+.

It sound like an interesting combination of mechanics.  If you are BGG Con this weekend, you might want to check it out.