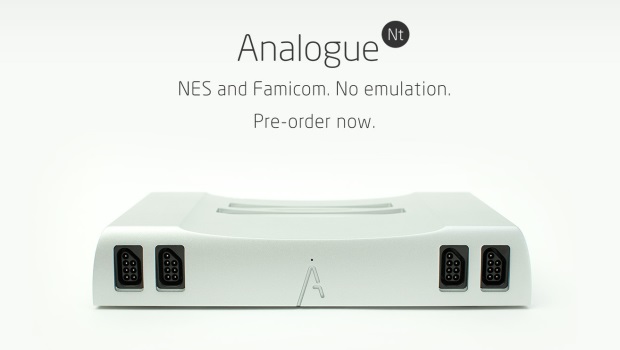 Analogue Interactive is now taking orders for the Analogue Nt, an aluminum-body custom console that plays NES and Famicom games natively on modern TVs. The Nt will support RGB video and stereo sound out of the box, with an optional HDMI adapter available as an add-on. Fabricated from a solid block of aluminum, the console uses original refurbished Nintendo parts, meaning no emulation is performed and original NES/Famicom accessories are supported. Four controller ports are standard, and Analogue is selling new and refurbished OEM controllers to go with pre-orders. Up to five color options are currently available for the anodized aluminum shell.

Analogue Interactive is known for their previous custom consoles, the Analogue CMVS and CMVS Slim, which allowed Neo Geo arcade games to be played at home. Like the Nt, the CMVS models were custom units employing existing hardware, and were notable for their hardwood cases and high build quality. Neither the CMVS or CMVS Slim are still in production, making the Nt the only current offering from the console designer. Since these devices are custom built for limited runs, we can expect that the Nt will sell out and likely be difficult to acquire aftermarket, just like the CMVS.

The Nt can be pre-ordered directly from Analogue Interactive’s online store for $499.00 plus shipping, with an expected fulfillment window of Summer 2014.