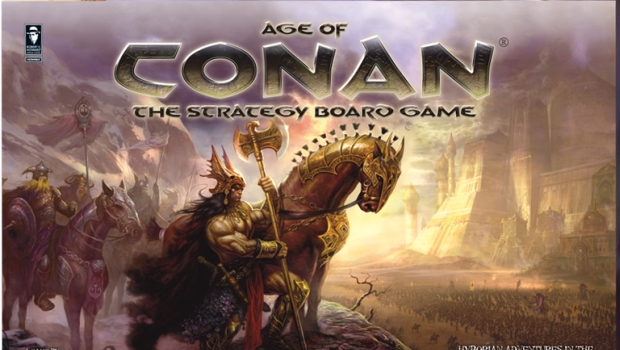 Age of Conan was published by Fantasy Flight Games in 2009.  A game of conquest involving the four factions of Hyboria, it gained a number of fans, but Fantasy Flight never felt the need for a reprint.  Now Ares Games is taking up the helm with a new Kickstarter for the game and an expansion, Adventures in Hyboria.

The re-launch of Age of Conan Strategy Board Game begins today on Kickstarterwith a campaign to fund the pre-production and publication of the game expansion, Adventures in Hyboria, setting the foundation for future development of the line. The campaign has an initial funding goal of $10,000 and ends on November 9th.

The Age of Conan Strategy Board Game pits the four most important Hyborian Kingdoms – Aquilonia, Turan, Stygia and Hyperborea – in a fight for supremacy involving war, intrigue and sorcery. Conan, the barbarian hero created by R.E. Howard, is a powerful presence, but he’s very hard to control! He may help or hinder your plans, while pursuing his own adventures to conquer treasure, women, and glory.

Adventures in Hyboria is the first expansion of Age of Conan since its launch in 2009 . It focuses on the life and adventures of the greatest fantasy barbarian ever, and it is designed to improve and expand the role of Conan in the game.

Adventures in Hyboria adds a new dimension to Conan’s adventures: his stature grows from warrior and thief, to general, and finally, king. His abilities grow as well, making his presence in the game more visceral and more important. The expansion adds other new mechanics and game elements, and opens up more opportunities for player-vs-player conflict.

In the “Age of Conan Strategy Board Game – It’s Back!” project on Kickstarter, backers can choose to support the game at two different pledge levels.

Adventures in Hyboria is planned to ship to backers in April 2015, and the Age of Conan 1st Editionboardgame will ship to Barbarian King backers at the same time, from Ares’ main warehouse in the USA and from secondary warehouse in Germany, with no customs charges to backers in the USA or in the European Union.

Age of Conan Strategy Board Game – It’s back! is the fourth Kickstarter project of Ares Games, following three highly successful campaigns: in 2013, Sails of Glory (US$ 276,745 pledged, 1183 backers) and Galaxy Defenders (US$ 180,252 pledged, 1080 backers), both already delivered with a very positive feedback from backers. In May/June 2014, Galaxy Defenders – The Earth Strikes Backwas funded (US$ 259,000 pledged, 1264 backers), and production is in progress with a confirmed delivery schedule at the moment.

This must be a hot project, since it has already funded.  In fact, it has over twice its goal already.  If you want in on it, check out the Kickstarter page here.