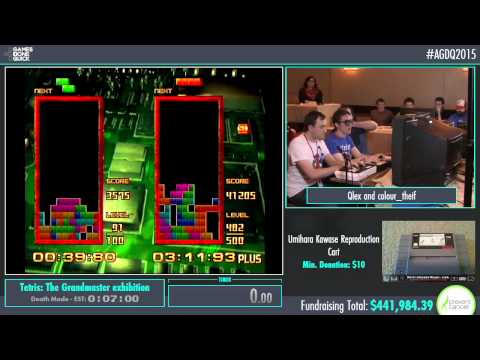 After six days of constant speedrunning, glitching, racing and sometimes singing, Awesome Games Done Quick 2015 turned off the stream and has announced a rough estimate of the total amount of money they’ve raised for charity. As of today, AGDQ 2015 has raised over $1.5 million for the Prevent Cancer Foundation.

A biannual charity speedrunning event, AGDQ takes as many world-record speedrunners as they can hold in a single hotel ballroom, and sits them in front of a Twitch stream to chat and run the games they excel at. This year might have been the best yet, with many runs featuring devs listening in and chatting with the runners, as well as amazing donation incentives like special challenge runs and an amazing blindfolded run of the child dungeons in Ocarina of Time. A few world records were set at the event, and many of the runs are incredible to watch, whether you’re a fan of the game or not.

Games Done Quick will be gradually posting the VODs over the coming days, but to help you out, I’ve compiled a list of some of my personal favorite runs from the event below. Check them out and keep tuned to www.twitter.com/gamesdonequick, as they announce plans for their next charity event, Summer Games Done Quick 2015!

The runs that are can’t-miss, gotta-watch videos are, in no special order….

This one is insane. We’ve all played and loved Tetris, but the game these runners play is on a completely different level from any Tetris you or I have even dreamed of. Clearing multiple Tetrises (Tetrises? Tetrisees? Tetri?) faster than I blink, these runners show off just how insane high-level Tetris play is.

Ah, Kingdom Hearts 2. Anyone who owned a PS2 played this game, and it was widely considered a must-own. These guys take that game, and show just how punishing it becomes on the special “Critical Mode” difficulty, featuring frame-perfect blocks, planned-out basic battles, and an irrational fear of Shadows. Also, they hit the incentive for this run, so the couch has to sing a famous Disney song over every Gummi Ship area. This is required viewing for anyone on the hype train for KH3.

This is black magic. Sorcery. A team of normal, average gamers who are secretly programming wizards managed to find a way to feed code through Pokemon Red and essentially re-program the game for their own purposes. They then taught a robot how to do that for them, and do it faster than they could by hand. Then they started teaching it how to create programs within that space they had created inside Pokemon Red. What happens next is insane levels of computer science and tech-driven craziness. Major respect to the team that spent hours and hours figuring this stuff out, it is a truly incredible achievement.