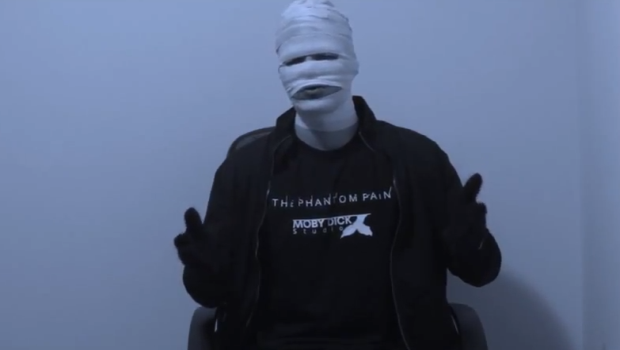 After it was reported last week that David Hayter would not be included on the upcoming Metal Gear Solid V in his famed role as Solid Snake, the tables may have turned back in favor of the voice actor. A mysterious video posted on Youtube by user ‘OnigawaraV’ made it pretty plain that something was up, providing several tantalizing clues in reference to the fifth installment of the series, whose release was confirmed at this year’s Game Developers’ Conference.

The video is little more than a bandage-faced man speaking through one of those voice modulator thingies, which makes the narrator sound a bit like Stephen Hawking (minus the tapping on a wheelchair keypad). By the way, the username ‘Onigawara’ is a reference to a decoration prevalent in Japanese Buddhist architecture, where an ogre with its face missing may be added to the design of a roof (thought that little fact would elude us, Kojima? I don’t think so). The bandages serve as a clear reference to Snake’s character, whom we’ll first encounter in the game as he is waking up from a coma, crawling around in a hospital like a paraplegic zombie. During the GDC presentation, Kojima himself showed up wearing the same bandage get-up that the star of the video sports, which pretty much solidifies the connection beyond any reasonable doubt. What makes the clip rather slippery is the fact that Hayter came out with a short essay on Twitter on April 1st stating his disappointment with the production’s decision not to include him:

I got in touch with someone involved in the production. We got together for lunch, and he told me that they “wouldn’t be needing me” on this game. No reason, or explanation was given beyond that.

And that was it.

I drove home through Laurel Canyon, bummed, and thinking about Snake.

To be clear, I love being a part of the world of Metal Gear. I admire its technological innovations, the gameplay, the political message of it all. But primarily, I love the fans of these games. Two grown men burst into tears upon meeting me at the Vancouver Fan Expo last year.

We can imagine how many other grown men burst into tears upon learning that his signature gravelly drawl would not be behind the grizzled face that fans of the series have come to know and love. However, at this point, the whole thing smacks of an elaborate set-up meant to throw us off the scent, and plant false information in a move that would do the CIA proud. The video includes one particular line that pretty much seems to spill the beans on the whole shebang:

While I will not currently reveal who I will be voicing soon, the hint of who I am will follow this sentence: I am the one you thought I would be from the start.

I mean, come on. Who else could it possibly be? He goes on to say (in that unnerving, electronic monotone), “look closer, detectives: the hint is right in front of you.” For one thing, there’s the bandages. For another, the guy is wearing a t-shirt bearing a logo of “The Phantom Pain,” the title of a game announced late last year (ostensibly unrelated to the series) under the development of a fictional company called Moby Dick Studio, a sly literary reference to chasing false dreams. The whole thing turned out to be an elaborate cover for the eventual real announcement of MGS V.

Our masked monologist concludes by assuring the MGS faithful that he’ll be back, Terminator-style, with a follow-up video revealing his true identity on June 11th, although it would be rather shocking if the clip divulged anything other than Hayter’s name in connection with the role. Keep an eye out for the next video from this mysterious Youtube poster, and keep your fingers crossed that Kojima Productions will deliver on the goods. After putting this out, he might find himself dealing with a powerful backlash after instilling this kind of hopefulness, if it’s all for naught. It’d be tough to imagine anyone else in the role after creating such a fervent following with all of the earlier titles, but you never really know, do you? Be sure to check back often for further updates, which will be posted just as soon as they become available.