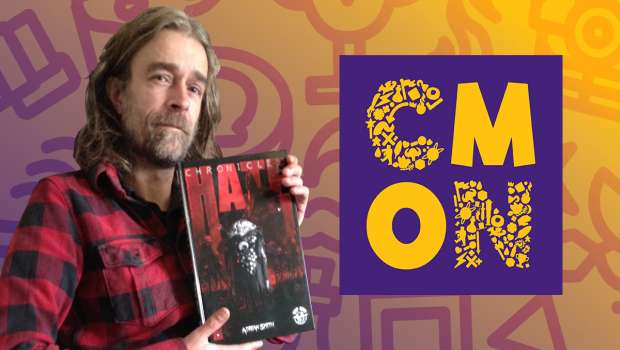 The art in board games has improved significantly in recent years.  If you take a look at the art of early Magic: The Gathering cards compared to how they look now and you might think that they are from different games.  Boxes for games no longer have the overexcited kid rolling dice and now have something thematic.  CMON is known for their great figures, but they have branched out with card games and other non-miniature games.  The artwork has been great, and that has been due in part to Adrian Smith.  Now he’s joining CMON as their lead artist.

CMON Limited’s line-up of the industry’s top talent expands today with the announcement of Adrian Smith joining the team as Lead Artist. Adrian’s role will help to ensure CMON’s continued excellence and leadership in the industry.

Adrian’s career as an illustrator is prolific, spanning over 30 years. His work can be found throughout the tabletop landscape. He was one the defining artists for Games Workshop’s Warhammer 40,000 line, and his work with Wizards of the Coast’s Magic: The Gathering is beloved by fans. Adrian brought Conan the Barbarian to life in the recent Conan board game from Monolith. His work goes beyond board games into other media as well, including several video games: THQ’s Warhammer 40,000: Space Marine, Ubisoft’s Heroes of Might and Magic V: Tribes of the East, and Gameloft’s Dungeon Hunter to name a few. Recently, he has illustrated popular CMON titles like Blood Rage, Zombicide Special Guest Artist boxes, The Others, and Rising Sun. Currently, Adrian is working on several projects, including Hate, based on his creator owned graphic novel series of the same name.

“CMON’s trust in my vision for the projects I’m involved with is key and made joining the team an easy decision. I’ve worked with them as a freelance illustrator for years, building a relationship that allowed me complete creative freedom with my projects. That same freedom carries on into our current and future projects,” explained Adrian.

David Preti, CMON’s Creative Director, adds, “Working with Adrian the past years on all of these amazing projects has been a wonderful experience, and having his talent as a full member of the team is great news for CMON and our fans.”

You can find Adrian’s most recent work, Rising Sun, on Kickstarter now with more exciting games in the future, including the already announced Hate.

It’s an impressive resume, and it looks like Adrian has his hands full with even more games coming out soon.