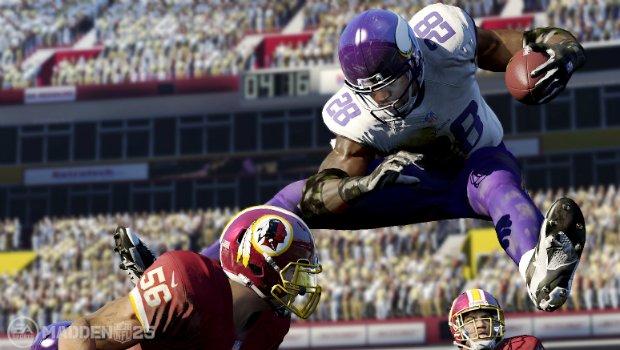 The Madden NFL 25 predictions have been made concerning the upcoming 2013 NFL season, and if it falls anything like what Madden has foreseen, we’re in for a noteworthy and exciting year of football.  Madden 25’s official simulation expects big years from Adrian Peterson, Peyton Manning, and surprisingly, the Houston Texans.  On top of their annual predictions, EA released some raw numbers about just how much Madden 25 was played after it’s release.

Their most bold prediction is that of Adrian Peterson breaking Eric Dickerson’s long held single season rushing record.  In the simulation, Peterson finishes the year with 2,139 yards, sliding just past Dickerson’s 2,105.  This would be a great moment in the sport and a fantastic “called shot” if it were to come true.  Despite Adrian Peterson’s projected masterpiece season, his Minnesota Vikings are slated for a lackluster, playoffs-less season.

The simulation predicts San Francisco will make a repeat trip to the Super Bowl to face the Houston Texans next February in the bitter-cold of New York City.  The AFC is projected to send all six of last year’s playoff teams back into the big dance, and the NFC has only one change, with the New Orleans Saints replacing Peterson’s Vikings squad.  There is very little chance this will come to fruition with the parity in the NFL, as year after year a team makes the jump from worst to first inside their division.  One team that Madden 25 assures us will not be making that jump is the New York Jets, who are predicted to be the worst team in football at 2-14.

As for the individual awards, Madden 25 predicts that Peyton Manning will win his record 5th MVP title, a feat fitting the world’s best regular season quarterback.  Running backs Montee Ball and Eddie Lacy are expected to win the Offensive Rookie of the Year award for the AFC and NFC, respectively, and the Defensive Rookie award predictions see polarizing figures Manti Te’o and Tyrann Mathieu winning.  While Ball and Lacy are safe picks to succeed (rushing touchdowns are an easy way to get noticed), both Te’o and Mathieu would make for must-see TV if they play at elite levels after their tumultuous off-season foibles.

In addition to their predictions, EA Sports released some pretty staggering numbers related to the Madden played in it’s first day after release.  Gamers logged 12 million minutes and scored more than 6 million points within that first day. The most-played matchup was between the Seahawks and 49ers, two division rivals that the Madden NFL 25 season prediction foresees as playoff-bound.

Madden NFL 25 is developed in Orlando, Florida by EA Tiburon and is now available for the Xbox 360, Playstation 3, and will be released on the Xbox One and Playstation 4 consoles at a later date.  To learn more about Madden NFL 25, visit their website.