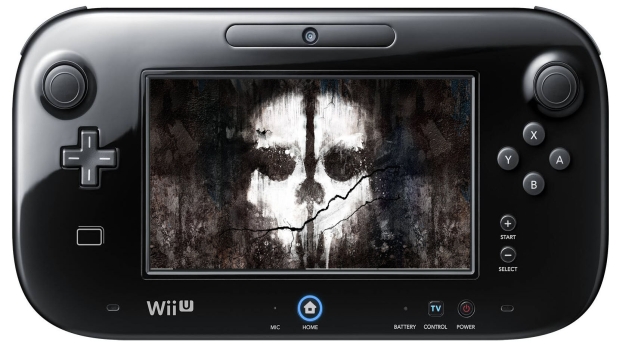 Rumors of the death of the Wii U (despite EA’s statements) is greatly exaggerated.   Activision has announced that they’ll be releasing six titles for the Wii U this Fall, including their first title from their recently-acquired Nickelodeon licenses.   The titles are Call of Duty: Ghosts, Skylanders SWAP Force, Angry Birds Trilogy, Angry Birds Star Wars, SpongeBob SquarePants: Plankton’s Robotic Revenge, and Wipeout Create & Crash.   Here’s a little bit from Eric Hirshberg, CEO of Activision Publishing on how they feel about the Wii U:

As we have said before, we’re committed to doing everything we can to support the Wii U, which is why we’re excited to be bringing some of the most popular entertainment franchises in the world to the platform this year.  The Call of Duty franchise continues to be one of the most powerful forces in gaming and Skylanders continues to enchant new fans around the world.  Our studios have been hard at work creating brand new immersive experiences perfectly suited to the Wii U platform and our fall lineup has something for everyone.

We’ve got a deeper look at the Wii U lineup from Activision below.

Call of Duty: Ghosts – Featuring an all-new world, story, characters and experiences, all powered by a new engine, Call of Duty: Ghosts is a stunning leap forward for the blockbuster franchise. For the first time in Call of Duty, gamers play as the underdog, fighting as part of a single squad against an enemy that has superior numbers and firepower. Call of Duty: Ghosts’ genre-defining multiplayer delivers gameplay innovations throughout, including dynamic map events, character customization and other features yet-to-be-announced. The title includes Wii Remote and second-screen Wii U™ GamePad support and more.  Call of Duty: Ghosts is scheduled for release on November 5, on Wii U and is not yet rated by the ESRB.

Skylanders SWAP Force – Activision’s Skylanders SWAP Force continues to build upon the success of the award-winning franchise’s signature gameplay and collectible toy experience with the introduction of an innovative feature – dynamic swapability. Kids and gamers will have unprecedented levels of choice in how they explore Skylands and battle KAOS by swapping the top and bottom halves of the toys to transform 16 SWAP Force characters into more than 250 unique combinations. Set in a richly detailed world of next generation visual fidelity, Skylanders SWAP Force takes kids on an all-new adventure with 32 never-before-seen heroic characters that each offer unique powers and personalities. The game also features new abilities – such as flying, climbing, and teleporting – which can be used in special areas of Skylands. Additionally, fans can play with their entire collection of 100+, forward-compatible toys from both Skylanders Spyro’s Adventure® and Skylanders Giants™. With Wii U, the GamePad allows fans to keep track of stats and view leaderboards, as well as fans’ character collections and upgrades – right in their hands. Additionally, the game is fully playable on the GamePad so kids can enjoy the game when other family members commandeer the TV. Skylanders SWAP Force is set to release in North America on October 13, Australia on October 16 and Europe on October 18 and is rated E10+ by the ESRB.

Angry Birds™ Trilogy – The game offers more than 100 hours of awesome Angry Birds action gameplay that spans the breadth of Angry Birds, Angry Birds Seasons and Angry Birds Rio titles, as well as 40 hours of bonus levels previously not on disc. The game features animated cut scenes and interactive backgrounds – all tailor-made in 1080p HD graphics with surround sound support. The new Wii U GamePad swap capability lets players use the GamePad touch screen controls to fling their birds with accuracy as they climb the online leaderboards for the world’s high scores. The game is scheduled for release on August 13, and is rated “E” (Everyone) by the ESRB.

Angry Birds™ Star Wars® – Join the Angry Birds in a galaxy far, far away… where a group of desperate rebel birds face off against a galactic menace: the Empire’s evil Pigtroopers! The game evolves the core game design and hilarious tone of previous entries in the series with new characters, challenges, and environments that pay homage to the iconic hallmarks of the Star Wars™ universe. This title adds twenty never-before-seen exclusive levels – on top of the already two-hundred from the original Angry Birds™ Star Wars® – and, for the first time ever, two new multiplayer modes. Play alongside your friend in cooperative mode to achieve a combined high score, or compete against family and friends (up to four players) in competitive mode. In addition, the game delivers online leaderboards, beautiful, high-definition graphics, and unlockable bonus levels, items and content. The game is scheduled to release on October 29, and is not yet rated by the ESRB.

SpongeBob SquarePants™: Plankton’s Robotic Revenge -In this original story, Bikini Bottom’s very own Sheldon J. Plankton and his new legion of evil robots have destroyed the Krusty Krab and stolen the safe that houses the famous Krabby Patty formula. Join SpongeBob and his friends to locate the hidden keys for the safe before the secret is lost forever! Blending platforming, action, and puzzle-solving, SpongeBob SquarePants™: Plankton’s Robotic Revenge features references and humor from the hit Nickelodeon TV animated series, as well as the voices from the show’s cast. Fans and gamers of all ages and skill levels can get together with co-op gameplay action, creating an experience that’s fun for everyone. Players can choose between their favorite Bikini Bottom characters including SpongeBob, Patrick, Squidward, Sandy, or Mr. Krabs as they scour the town hunting for hidden keys and collectibles. The game is expected to release this fall and is rated “E10+” (Everyone 10 and older-Cartoon Violence) by the ESRB.

Wipeout™ Create & Crash – Based on ABC’s popular TV game show, the game gives players greater control as they test their agility, endurance and abilities. For the first time ever, players can design, play, and share their very own chaotic courses with the all new Course Creator. Choose from easy, medium or hard obstacles and try to beat your course, and then share the unique code with your friends and family! In addition, compete as either fan-favorite or all-new characters in over-the-top new courses like Prehistoric Panic and Wipeouts Ahoy with all new themed obstacles. You can also challenge your friends to reign supreme in side-by-side or team local multiplayer! The game is expected to be released this fall and is rated “E10+” (Everyone 10 and older – Comic Mischief and Mild Cartoon Violence) by the ESRB.