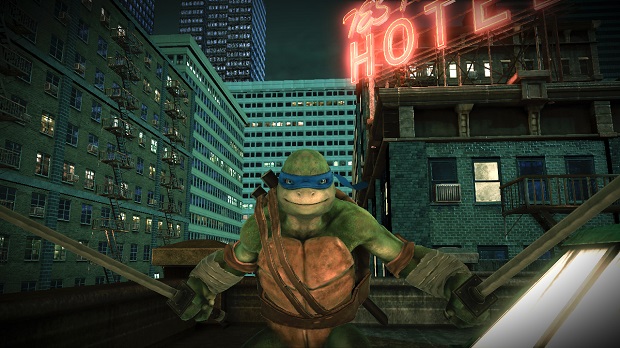 If you grew up during the 80’s or 90’s, I’d be fairly surprised if you didn’t have a bit of a soft spot for the Teenage Mutant Ninja Turtles. The franchise is probably best known for the movies and television show, but TMNT has had it’s fair share of video games, including the legendarily difficult Turtles in Time. Well, if you liked those old brawlers, Activision has some radical news for you.

That’s right: a new Turtles brawler!  Teenage Mutant Ninja Turtles: Out of the Shadows is currently in development by Red Fly Studios, who are probably most well known for the 2009 Ghostbusters game and for porting Star Wars: The Force Unleashed II to the Wii.  TMNT: Out of Shadows appears to be based on the most recent show from Nickelodeon, and according to Activision’s press release will feature

…an original hyper-realistic 3D-style, gamers can experience four-player online co-op play while stomping out the Foot Clan and unleashing turtle torment on any foe that gets in their way.

Activision also released an announcement trailer, which doesn’t give a whole lot away, but you’ll catch a few glimpses of tubular turtle action if you check it out below.  You can expect to see TMNT when the summer months come around on XBLA, PSN, and Steam.

Teenage Mutant Ninja Turtles Out of the Shadows - Announcement Trailer