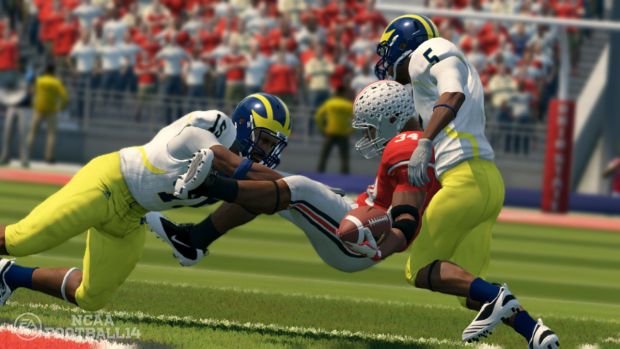 Accused murderer and former New England Patriot Aaron Hernandez will be removed from both NCAA Football 14 and Madden 25 upon their releases. After all the recent controversy surrounding Hernandez, this was an unsurprising move on EA’s behalf. In college, Hernandez was a standout on current Ohio State Buckeye’s head coach Urban Meyer’s 2008 National Championship winning Florida Gators. Hernandez had originally been in NCAA’s Ultimate Team mode, the card game based feature that all sports games seem to be introducing here recently.

We have made a decision to remove Aaron Hernandez from Madden NFL 25and NCAA Football 14. Because NCAA Football 14 was finalized prior to our decision, Hernandez’ image still appears in the Nike Skills Trainer. However, he is not in the game, and anyone who unlocks that particular Nike Skills Trainer reward will receive an Alex Smith Ultimate Team player item instead. The image of Hernandez will be removed via a Title Update in the near future.