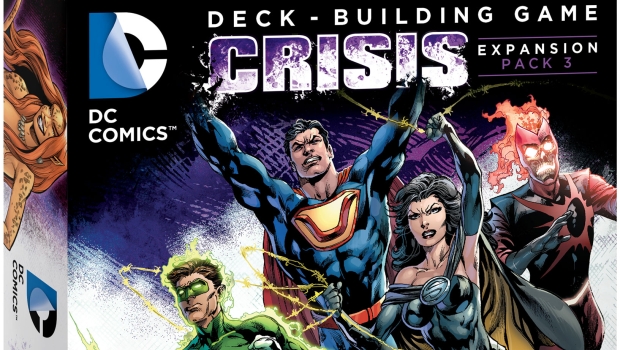 I often recommend the DC Deck Builder to people who want to learn how to play a deck building game.  It plays fast and isn’t bogged down by extra resources and rules for how many cards you can buy each turn.  While there are four big-box versions of the game, you can expand the cards available with the Crisis packs.  The third one is available now, and looks to include several intriguing twists.

The newest add-on release within the DC Comics Deck-Building game line, the Crisis Expansion Pack 3 will release on March 2 and is fully compatible with all previous standalone releases of the product line. The expansion pack adds further customization to the game.

In the DC Comics Deck-building Game Crisis Expansion Pack 3, players will face some of the most epic challenges, events, and destructive forces in the history of the DC Comics universe. Players will find 14 “Impossible Mode” Crime Syndicate Super-Villains to battle against and Crisis versions of eight oversized characters such as Lex Luthor, Sinestro, Bane and many more. Also included are six new playable oversized characters and new main deck cards for competitive players.

This Crisis Pack features two unique modes of cooperative play, one is a completely cooperative mode, where players all work together to overcome challenges and foes. The other is a “Hidden Objective” mode, which has never before been seen in a deck-building game. The Suicide Squad makes its debut in this game as playable oversized characters. With this team, it seems someone always has their own agenda when they take on a mission. In this mode, players are still working together, but everyone has their own definition of what a win means. One player may be secretly working against the rest of the team.

This is not a standalone product. DC Comics Deck-building Game, Heroes Unite, Forever Evil, or Teen Titans is required to play.

It looks like there’s a ton of content that will bring a new experience to even the most experienced players of the game.  It’s available today, so be sure to check stores to see if they have it in stock.