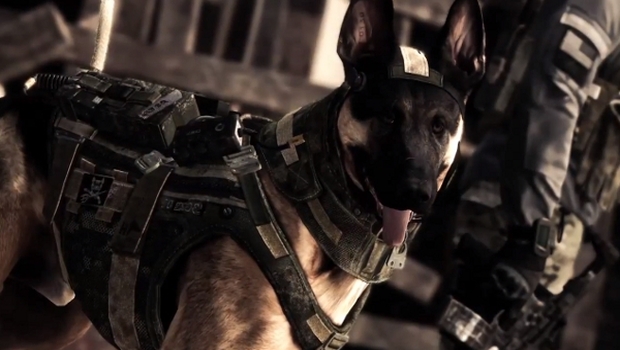 We’d already gotten a really good look at Call of Duty: Ghosts courtesy of the Pre-E3 show, but I got to see a much better view of the game from the comfort of a behind-closed-door meeting with the developers at Infinity Ward.  We also had a chance to get a much better look at the tech, a bit more context, and a never-before-seen level only shown to select press members.   It was time to see what this year’s inevitable multiplayer King was shaping up to be.

Graham Hagmaier, Associate Producer of the Call of Duty series, gave us the narrative for our hands-off look at the game.  An unknown mass event creates havoc in the United States, shutting down all of our technical infrastructure, and thus our way of life.  No longer a super-power, the country quickly falls into disarray and is overrun.  We catch up with two brothers 10 years later as they link up the “Ghosts” – the remnants of military special forces units.

Our first demo was more of a technical view of the engine behind the game.  Entitled “Jungle”, the level showed off the new displacement mapping technology. Combined with tessellation and “sub-d”, the engine smooths out curves in real time.  Edges that were once jagged due to minimal poly count can be ramped up exponentially without a great deal of extra computing power, subdividing in real time – no matter how close you get, nothing breaks down.  Cuts, scrapes, natural imperfections, and perfectly round scopes are now possible.  We’ve always said it’s the little things – this is the little things on speed.  You can check out a little bit about it right here:

The second demo called “No Man’s Land” opens with our much-discussed service dog Riley, our motion-captured pooch based on a real Seal Team service dog.  The four-legged team member sports a battle vest that holds a periscope camera, an earpiece that lets his handler give him audible commands, and a collar that gives non-audible ‘nudges’ to the dog to allow for silent control when speaking isn’t possible.  Descending into the remnants of San Diego, Riley is tasked with a bit of recon on some enemy troops.  Hiding in the grass, we find some soldiers using radiation scanners in the area.  Riley latches onto the arm of one while the two brothers cut down the remaining soldiers.  Moving into an overgrown and bombed out mall that is sunken into the ground, we hear a helicopter overhead.  Earthquakes rock the building, paintings fall off the walls, and the place generally looks like it’s about ready to fall apart. Looking out over the horizon we see that a huge crater has emerged where the city used to be.  It’s pretty clear that whatever hit here absolutely decimated it.  A church shifts on a nearby precipice, shaking apart and sliding off the cliff edge.  Riley growls and points at an approaching enemy.  Using his periscope camera to guide him, we scan for nearby enemies.  Carefully moving Riley through the underbrush, we sneak up on another enemy, taking him down and then tearing out his throat.   Barking to bring an enemy our way, our brother gives him a shot to the head with his rifle.  In a ruined building we slowly advance, cutting down guards and scientists alike.   Riley is an effective soldier, causing fear and panic in the enemy.   Issuing the voice command “Riley, search” we send the massive German Shepherd through the window.  As a soldier bursts through the door, the game shifts to familiar slow motion as a second soldier tries to fight off our four legged friend.  As we pull down our mask to enter combat, our demo ends. Damn it Infinity Ward…don’t kill this dog.  Seriously.  And so you can become as attached as we are, here’s a bit about your newest battle-buddy:

The final demo, the press-exclusive, was entitled “Federation Day”.   Deep in enemy territory, we’ve been tasked with infiltrating a building in Caracas.  Pulling down our Ghost mask, we watch as helicopters swoop over a very active building.  Setting up a launch system that lets us fire grappling lines to the adjacent building, we zipline across to the AgoC Holdings tower.  Detaching our lines, we make our way down the glass face of the structure.  Shifting right, we took out several soldiers through the glass with our silences weapons.   Finding a trio playing poker in one room and two in the kitchen, but with only three guns in play, we end the two in the dining area.  One of the soldiers gets suspicious, but his buddies call him back to the poker game before he can discover the two bodies in the kitchen and blow our cover.  With precision, we cut down the three at the poker table, their cards scattering thanks to the muzzle velocity of our rounds.  Using a torch, we cut a circular hole in the glass which allows us to kick through and breach the building.  Hustling through the server room door, we open a sliding door rack.  Placing a Power Block C1 card into the server, we arm the weapon and quickly hide in the darkness.  As one patrolling soldier wanders off from the pack, we cut him down and yank his lifeless body back into the darkness with us.  Heading back to our entry point, we hook up to our fastropes and light up the Power Block.  As the power in the building goes dark, we begin to literally run down the face of the structure.  Gunning down guards on the balcony, we stop short to quietly decend on the last few guards like a group of ninjas.   In true Call of Duty demo fashion we fast forward “In the interest of time…”.  With the mission fully compromised at this point, we are again running down the building.  A quick glance backwards shows that the structure is literally collapsing behind us.  On fire, glass shattering, and debris raining, we need extraction immediately.  As the structure collapses, we are sent sliding with chunks of debris through the glass, ending our level.

Our final demo is one we saw bits and pieces of in the video below.  Entitled “Into the Deep”, this mission takes place near the South American coast in the Carribean Sea.  Our task is to sabotage a missile cruiser.  As we slowly swim through the water, the world is alive with color, life, debris, and plants everywhere.   Sharks swimming in the area, fishing nets, and downed ship masts of a nearby wreck brings the world to life.  Unfortunately, the ping of our sonar reflects on a group of divers searching for us.   Our brother’s fins disturb the water with bubbles and cavitation as an overhead boat drops divers into the water.  Swimming on we go “weapons free” with our new “APS” – a new underwater machine gun based on a real-world recent advancement in ballistic technology.  A DSRV carrying additional divers blows past and we skip forward again “in the interest of time”.  Rejoining the team, we’ve come up in a field of crashed cargo containers.   The sonar blasts are like pulses of force as huge waves cut through the area with each ping.  As the sub target enters our field of view we release an M.O2 – a handheld torpedo.  Guiding into the side of the boat, we send it to the bottom of the sea, knocking ourselves backwards into the water and crushing us underneath a large chunk of debris.   Our brother lifts the rocks off of our chest just as the carcass of a helicopter rolls down the debris shelf  (apparently they crash in the water too!)  With our target eliminated, we swim as fast as possible to evade all of the other falling flotsam threatening to cut us to ribbons.  As a group of divers cuts off our escape, our time with the game ends.  Experience it for yourself below:

If there is one thing I know, it’s that Infinity Ward will create a fantastic single-player experience, filled with awesome set pieces for us to enjoy.   While we didn’t get a lot of insight into any of the multiplayer modes that’ll inevitably consume the vast majority of the world’s bandwidth this November (underwater team deathmatch?), it is clear that the team is ready to try something new.  We’ll certainly get a lot more information as we move closer to the holiday release on Xbox 360, PlayStation 3, Wii U, PC, Xbox One, and PlayStation 4, so stay tuned! 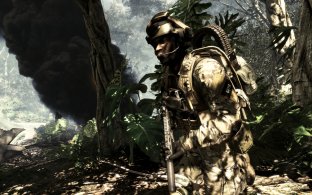 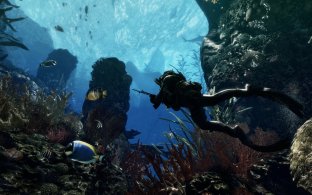 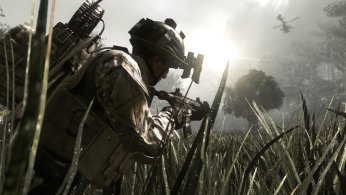