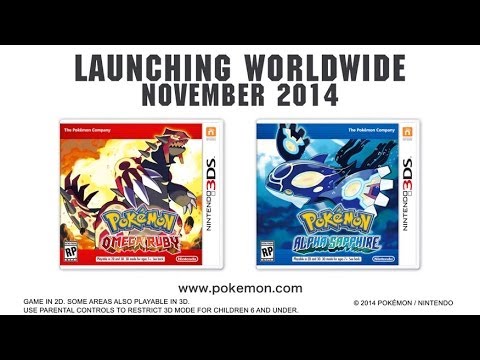 It has been confirmed that Nintendo will release remakes of the Game Boy Advance iterations of the Pokemon franchise this November.

Nintendo has released a brief teaser on the Pokemon YouTube channel announcing that Pokemon Ruby and Sapphire will be remade for the 3DS and 2DS as Omega Ruby and Alpha Sapphire. No gameplay for the remake is shown as the trailer only features a look at the games’ box arts.

Pokémon Omega Ruby and Pokémon Alpha Sapphire – November 2014!
The trend of remaking older Pokemon games for the latest Nintendo handheld started with remakes of the original Red and Green versions in the form of FireRed and LeafGreen for the Game Boy Advance in 2004. Five years later in 2009 HeartGold and SoulSilver were released for DS as remakes of the second games in the series Gold and Silver. Pokemon Ruby and Sapphire were originally released for the Game Boy Advance over 11 years ago in 2003.

Nintendo recently announced that it had suffered its third annual loss since the Wii U’s launch, with the 3DS being more successful, but not matching the company’s initial forecast.