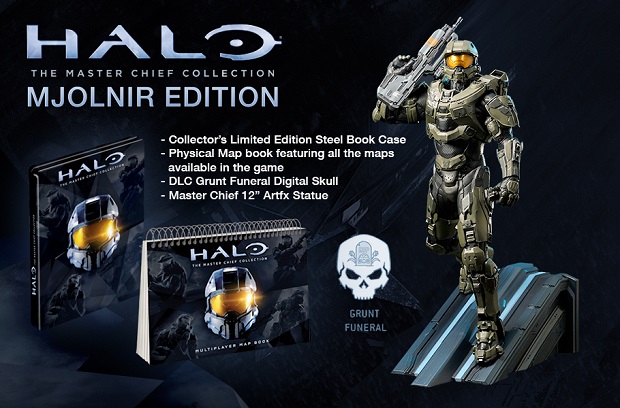 Microsoft has revealed what fans can get if they purchase one of two Master Chief Collection special editions.

UK retailer GAME will be offering fans the Mjolnir Edition, which will come in a steelbook case, contain a book with all the game’s maps, a Grunt Funeral Digital Skull DLC, and most tantalizingly a 12″ statue of Halo’s protagonist Master Chief.

The statue will come with two interchangeable sets of arms that you can pose him with, one set containing a Battle Rifle over his shoulder, or held in combat stance.

The Mjolnir Edition will run you £169.99, with most of the cost being attributed to the statue. If you don’t care for the statue, the game will also be available in a £52.99 Limited Edition that includes everything in the Mjolnir Edition other than the Master Chief statue.

After rumors of the existence of a Halo collection containing all four mainline games in the series began circulating around the web, Microsoft properly revealed the Master Chief Collection at its E3 press conference back in June.

Halo: The Master Chief Collection is coming to Xbox One on November 11th.