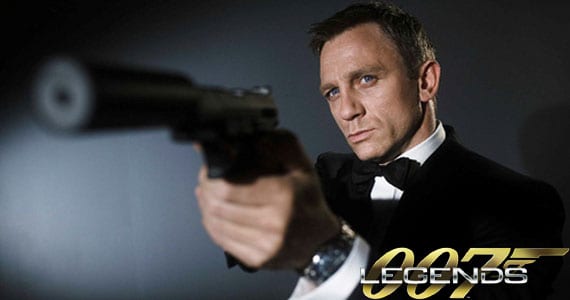 It’s hard to believe that there are 22 Bond movies spanning 50 years, but that’s entirely true.  I’ve got my review for the game coming in just under 2 hours, but in the mean time, here is a nibble from the official press release as well as the launch trailer:

007 Legends is the latest installment in the esteemed franchise, delivering a first-of-its-kind Bond video game experience featuring a story inspired by five classic Bond films – Goldfinger, On Her Majesty’s Secret Service, Moonraker, Licence to Kill, Die Another Day. Additionally, 007 Legends will feature a sixth mission based on this year’s highly anticipated Bond film – SKYFALL – which will be available to unlock as downloadable content. Timed to the North American release of the feature film, PlayStation®Network subscribers will gain exclusive early access to the SKYFALL mission on November 9, 2012, and then on November 20, 2012, the mission will be available on Xbox LIVE® online entertainment network.

Early reviews of Skyfall are calling it the best Bond movie ever made!   As a hardcore Bond fan myself, I am in total blackout mode for the movie until I see it for myself.  Thankfully the folks at Eurocom have gated the DLC until after the movie.  Look for 007 Legends to hit shelves today, and look for my review shortly.  Enjoy the trailer, Mr. Bond.