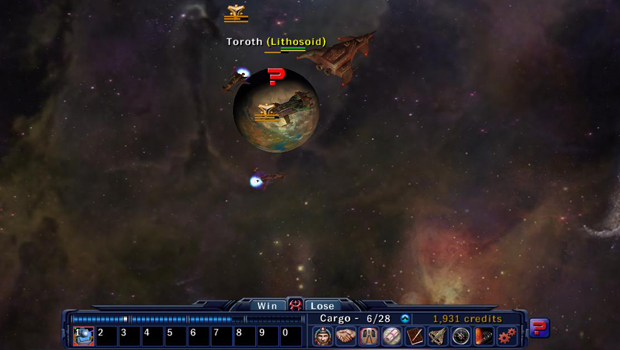 Soldak Entertainment has carved out a niche for itself among the indie RPG companies: throwing the player into a unique, dynamic world that has a life of its own, regardless of what the player happens to be doing at the time. Drox Operative is their latest offering, throwing you into a sci-fi world with a variety of races, a unique history, and a plethora of options to choose and challenges to pursue as you struggle to bring glory and power to your guild by any means necessary. If you can cope with the relatively average graphics and the slightly overwhelming interface, what you’ll find is a refreshingly unique game that offers a tremendous amount of replay value for a low cost, a practically endless amount of challenge and most importantly, a whole lot of fun on top of it all.

Drox Operative throws you into a world that is strongly reminiscent of Galactic Civilization. Each game generates a dynamic world filled with a selection of alien races, all of whom are going about their own business – growing in power, seeking new technology for themselves, declaring war on each other and otherwise going about the messy business of existing in a sci-fi world. While you can choose to start as any of these races (and thus be granted a different ship and ship abilities), your race choice doesn’t determine who you’re working for. Instead, the game always places you in the role of a Drox Operative – a representative of a powerful but clandestine guild, seeking to expand their power from behind the scenes rather than openly warring with the various races in the game. Whether by diplomacy, economic power or sheer brute force, your job is to get all the major powers in your sector nicely lined up and in the ideal situation for the Drox Guild to exert their influence. How you choose to go about doing this is up to you – your guild doesn’t care. They just want results.

You can get those results in a variety of ways, and here is where the game starts to sound its most Diablo-like. You fly your ship around in this randomly generated (but somewhat sparsely populated) universe, seeking out aliens who will generally have quests to give you. Maybe they’ll want you to help make their system safer by clearing out some hostile NPCs nearby. Maybe they’ll want you to bring back a certain desirable good to their planet, or colonize some theretofore uninhabited world on their behalf. There’s a variety of missions to choose from, and while the assignments themselves may seem familiar, Drox Operative presents a twist. Instead of simply waiting around for you to accept and complete tasks on their behalf, the races of the game will experience the passage of time no matter what you do. A quest you accepted may be completed by the race themselves. If you’re told to go defend a colony from marauding aliens, you can’t wait forever to go solve the problem. Either someone else may get rid of those marauders, or the marauders may simply wipe out their target, obviating the race’s need for them to be stopped anyway. This is the heart of Drox Operative’s gameplay, and it’s a pretty unique (and positive) twist on the typical RPG quest mechanics.[singlepic id=10921 w=320 h=240 float=left]

I’m a fan of what Soldak is trying to accomplish with a game like this, and I’ve always been able to forgive mediocre graphics in exchange for some good, solid gameplay – and that proclivity helps out here, because really… the game’s visuals are thoroughly average. They get the job done – a ship looks like a ship, a mine looks like a mine, and most of the icons are easy to figure out after some exposure. But at the end of the day, Drox Operative was made by a hard-working but still indie company that doesn’t even try to make a game that’s amazing in terms of graphics or audio. The interface, however, is a little overwhelming on an initial play-through – this is a game that would have benefited greatly from an in-game tutorial. Reading the manual actually helped a lot, and in fact I’d say it’s a requirement for all but the most discovery-inclined gamers out there. Hey, some of you like to just play a game and figure everything out without having to consult documentation – I can respect that.

There’s a lot to do in Drox Operative: exploring the systems for challenges and new areas, attempting to manipulate the various races to the unseen will of the Drox Guild, upgrading your system, seeking out legendary artifacts and more. However, the systems themselves can seem a little bit on the sparse side. Really, part of that is understandable since you’re in space (there just isn’t much up there, guys – ask NASA), but compared to earlier offerings like Din’s Curse, it makes the environment seem a little more dull. Doubly so since your ship putters around rather slowly from point A to point B. You can roam as much as you like, but most of that roaming consists of blindly throwing yourself towards the fog of war in the hopes of stumbling upon some ships to fight, new races to meet or other anomalies to explore.[singlepic id=10922 w=320 h=240 float=right]

Combat’s a little bit on the straightforward side as well. While you can get a wide variety of loot to build your ship up with (complete with randomized stats, tiers of rarity and the need to identify objects – more Diablo-style fun here), and a selection of different stats to invest points in as you level up, the actual combat tends to unfold in a supremely direct manner. You press one of the number keys to fire whatever weapon you’ve installed in the given slot, the weapon can either auto-target or target enemies with a mouse-click, and from there it’s just a matter of paying attention to your health, knowing when to flee and when to stay put. As with a lot of games like this, the bulk of the combat excitement takes place in how you build your character (or in this case, ship) up well before combat takes place. Once you’re in a conflict, you find out whether your strategy and build is going to work, period. There’s not much of an emphasis on turning the tide of battle with brilliant tactical maneuvers.

If there’s a crowning achievement of Drox Operative, it’s in the replay value possibilities. First off, like other Soldak Games, there is a variety of settings you can use when generating a new game for yourself. Four levels of difficulty, a ‘starting monster level’ that scales from 0 to 100, sector size, pacing, race number and your choice of sector settlement. On top of this there are additional challenges you can pursue, achievements to unlock, and a hardcore mode. A multiplayer mode is also available, but I wasn’t able to try this out – no players were around at the times I was available to play. Maybe I missed them, or maybe they simply aren’t there. Even if the multiplayer side of things is dead, it hardly matters: if you enjoy the gameplay on offer here, you’re going to be able to go back again and again for newer and more demanding challenges. Whether you win or lose a game, you can bring your ship over to a fresh game with all the loot and levels you’ve accumulated – and there’s even a shared loot stash in case you want to start a brand new ship out from close to ‘scratch’.[singlepic id=10923 w=320 h=240 float=left]

All in all, I enjoyed Drox Operative. It’s a niche game, certainly – graphically bland with some intriguing gameplay that situates itself somewhere between a realtime strategy game and a roguelike style RPG, offering a whole lot of replay value to those who end up getting into the game. On top of this, it’s priced on the cheap side – $19.99 will get you the game in both Mac and PC versions, straight from Soldak itself. If you’re still not sure whether the game is for you, I recommend checking out the demo to use as the final judgment call. This is truly a unique game, and is worth a look for any RPG fans with a thing for randomized, dynamically generated worlds.