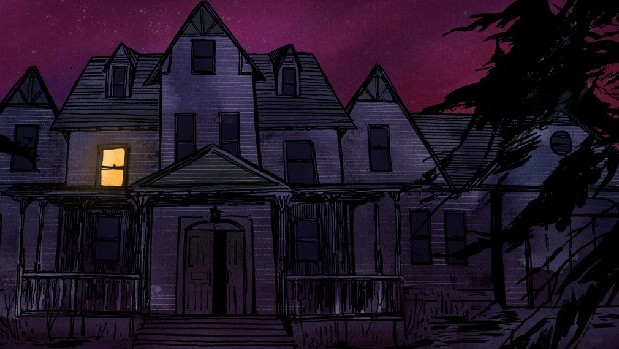 You’ve just arrived home from a year studying abroad in Europe – though the word “home” is a loose term for this place. You’ve never set foot in this house, as your family moved here while you were away; the only contact you’ve had with them over the year came in the form of random postcards. It’s after one in the morning, and no one appears to be home. A note on the wall from your sister warns you not to go poking around the house. Rather than waiting outside in the bracing chill of an Oregon rainstorm, you decide to look around for the spare key and make your way inside.

As you enter, you notice the massive foyer that still somehow belies the true size of this mansion. The lights flicker as you look around all the unpacked boxes and various clutter, hoping for any sort of clue of your family’s whereabouts. Rather than sitting around and waiting for someone to come home, you decide to do something a bit more proactive.

[singlepic id=15203 w=320 h=240 float=left]You may be spending your time running around this antique mansion as older sister Katie, but Gone Home’s narrative is really about the relationship between your younger sister Sam and her parents. You’ve been gone for so long that you’ve almost become a non-entity within the entire ecosystem of their family. This “blank slate” helps you step into her shoes, and because the clues that you’ll find are as much of a surprise to her as they are to you, her discoveries become your discoveries.

As you wander the house, you’ll come across all sorts of things: notes, letters, trinkets. Things that were supposed to be secreted away: a porno mag hidden underneath a stack of old books, a note from Sam to her friend Lonnie, a letter to your mom from her old dorm mate. Dresser drawers are unseated from their tracks, electronics appear to have been hastily removed from their home entertainment centers; the entire house is in a state of disarray and chaos, despite the complete lack of any presence inside it. This is a broken home in more ways than one, and discovering where exactly your family has gone is merely the root of a much larger problem.

[singlepic id=15204 w=320 h=240 float=right]To say any more about the story would spoil the entire experience; the game is the narrative. And on paper, the actual game part doesn’t seem very interesting. You wander the house, poke your nose into any and all interactive objects, and read. It’s very similar to other exploratory games like Kentucky Route Zero or Dear Esther in that respect, though Gone Home does have a few more actual puzzle elements to it than other games. Certain areas of the house are locked off, and you’ll have to return to areas you’ve previously visited in order to find keys or clues which will allow you to explore further.

But the main draw to Gone Home isn’t its fairly rudimentary mechanics, but rather its potent narrative and the organic way that it unfolds. Certain details that you’ll find at the start of your voyeuristic snooping will come full circle by the end, and none of the notes or messages that you find feel forced or unnatural, and are all incredibly well written.

And before you even have a chance to realize it, you’ll have a full narrative arc for every single member of the family, just by glancing at environmental cues. Each item, document, poster; everything carries weight within Gone Home’s mise-en-scene, and all provide detail and insight on the lives and personalities of these characters. Small touches – a series of sticky notes that exclaim “YOU CAN DO BETTER,” a mixtape with a local riot grrl band on it, or a couch fort in the living room – all mean something within the greater context of Gone Home’s narrative.  Discovering those connections are some of the greatest moments in the game, and proof that this particular story couldn’t be told outside of the trappings of interactive fiction.

[singlepic id=15205 w=320 h=240 float=left]Gone Home presents its subject matter with a grace and maturity that most games could only dream to achieve. The way that small details are scattered about, and how they feel organic within the environment yet still somehow help to provide a story arc for all characters involved (despite not actually seeing any of them) is proof positive of The Fullbright Company’s mastery of the craft of interactive storytelling. Judging Gone Home purely from a gameplay standpoint is a reductionist argument at best and completely misses the point – that Gone Home is a stellar example of the power of interactive fiction.

Video games have a tendency to focus on a macro scale: save the world, defeat the giant robots, embody the amazing, all-powerful magical being. They tend to drown out the notion that we can use video games as more than just power fantasies and hacky genre fiction. But every now and then, a game comes along to prove that interactive fiction has its place in the pantheon of expressive art. Gone Home is not only an important game in its own right, but is absolutely vital to the advancement of how we approach narrative in games, as well as the subjects we tackle.