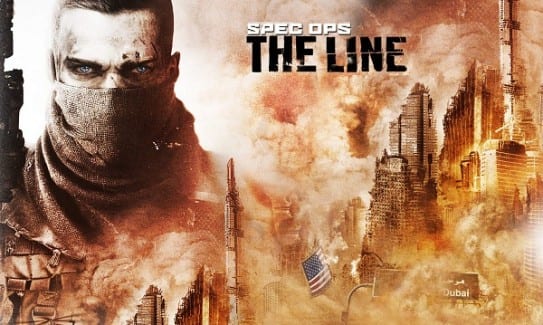 Other than one title on the PS2, we’ve not seen Spec Ops since the days of the original PlayStation.  In fact, it’s been since 2002 since we’ve played the series and many had presumed we’d seen the end of the Spec Ops franchise.  When the RockStar-produced sequel was cancelled in 2003 it only served to fuel that same thought.  It came as a surprise to all of the press in attendance to see the E3 debut of Spec Ops: The Line in 2010, and even more of a shock that it actually looked good.  After what seemed like an extended (and very quiet) wait, we finally have our chance to take it for a spin for ourselves.

The game takes place in the not-too-distant future.  A horrific sandstorm has completely engulfed the city of Dubai, triggering a UN-backed evacuation. Unfortunately, the 33rd Battalion suffered against the 80+ mph windstorms and blistering sand.  The last anyone heard from them, they were mounting a rescue operation to bring over 1000 United Arab Emirates citizens out from the sand wall to safety…that was 6 months ago.  Complete radar and radio obfuscation enveloped the city until just a few days before the game begins.

In Spec Ops: The Line you play Delta Operative Martin Walker (voiced by Nolan North).  He and his fellow operators, Alphanso Adams (played by Christopher Reid), and John Lugo (played by Omid Abtahi) are charged with investigating the mysterious radio signal that has come out of Dubai.  The transmission comes from Col. John Konrad – the leader of the original team charged with the citywide evacuation.  What they find when they get there is beyond anything they could have imagined.

“If you’re in a fair fight, you didn’t plan properly.” – Nick Lappos
I’m reviewing Spec-Ops: The Line on the PC, so it’s fair to tell you that this game needs a hefty amount of power to run with all the bells and whistles maxed.  Here are the minimum and recommended specs:

I’ve played this on both my desktop and laptop, but primarily on my MSI GT70.  It laughs at the recommended requirements so I was able to play at the highest levels.  While some reviews for the console versions of the game may have called it a mixed bag graphically, let me assure you that is not the case on the PC.  The character models are impressively detailed, as are the environments.  The real-world city of Dubai is jewel in the desert, replete with incredible feats of engineering and architectural marvel.  When the sands came in the game, much of what makes up the city crumbled under the might of nature.  Buildings tall enough to touch the sky groan under the weight of metric tons of sand, their facades ripped off, exposing the lavish interiors to the vicious elements.

Much like the real world, when you are in the desert the sun not only grants life, but also takes it.  The sand shifts under your feet, and the sun is often blinding.  This can make some firefights somewhat difficult if you are facing the rising sun.  It can be equally difficult if you are engulfed within a raging sandstorm.  Like anyone with good sense, you’ll often seek shelter away from both of these scenarios, making your way into the dilapidated hotels, TV stations,  museums, and other set pieces.  While the desert doesn’t make for a rich pallet, Yager has done a great job bringing the environment to life both inside and out.  In a gaming landscape where everything is coded to run on a console, it’s pretty great to see a beautifully rendered world on the PC.

“We ain’t making no goddamn cornflakes here” – Col. Charlie Beckworth
Reaching all the way back to the game Kingpin, rated M games have been a bit, let’s say ‘uneven’.  Either they push towards the most ham-fisted use of sex, or they beat you over the head with a stupid string of profanity that no sane person would put together.  Put simply, very few games take mature themes seriously in gaming.

Walker, Adams, and Lugo make their way into the city and very quickly find that it has descended into chaos.  Rogue factions, brothers killing brothers, and far worse atrocities committed against the remaining civilian population are just a few of the themes explored throughout the course of the game.  Bruce Boxleitner hands in a fantastic performance as the war-weary Col. Konrad, and North delivers the first M-rated content I’ve heard in his career.  The writing is literally laugh out loud funny at times (and very reminiscent of conversations I had while I was in some of the sandy parts of the world), and very dark at others.  It is clear that lead writer Walt Williams has seen inspiration in some of the most savage expressions of war on film and print.  Saving Private Ryan, Heart of Darkness, Platoon, Bridge over the River Kwai, and others all show the bonds of brotherhood as well as the brutality of war, and Spec Ops: The Line captures those same feelings perfectly.

In terms of gunplay, Spec Ops: The Line takes less risks than you might expect.  Using the tried-and-true cover system we’ve seen in a great many recent shooters, you’ll amble over or around cover elements.  It is very serviceable whether you are using mouse and keyboard or the included controller options.    You’ll also be able to, in a limited fashion, direct your two teammates.  They’ll flashbang or take out a marked enemy (though I found marking enemies to be somewhat difficult at times – sometimes it didn’t want to highlight an unobstructed nearby target), but don’t expect flanking or the ability to position them manually.  Enemy AI is equally middle-of-the-road with foes generally ambushing you from cover or rushing headlong into battle.  Thankfully it isn’t the artificial chest-high wall-fest of Gears of War – there are plenty of moments where you’ll have to have some operational awareness to get your tail to cover.  Depending on your selected cover, it may not last long under fire so choose wisely.

There is one aspect of Spec Ops: The Line that can be a little frustrating – targeting.  While on the easiest difficulty there is a ‘stickyness’ to the targeting reticule, normal doesn’t have this advantage. Directing your team to throw flashbangs is easy, but directing them to quietly take out a foe is fairly broken.  You have to highlight the enemy by pressing the third mouse button and hovering the triangle over the enemy.  I didn’t realize how long I had been trying highlight an enemy until my wife said “Are you waiting for him to die of old age or something?!” – for some reason, it is just nearly impossible to highlight them for the shot.  It breaks any of the minor stealth elements that are present in the game.

While the voice acting and solid writing certainly serve up the best performance, they are upstaged neatly by the sand in this game.  One of the big gameplay mechanics in Spec Ops: The Line is the interaction of sand in the environment.  While the sand does come across as a set piece element, set up and waiting for you to use, when you do use it it amazing things happen. During several points in the game you’ll unleash sand pressed up against fragile glass, which can often enough trigger landslides, structure collapse and much more.  As you progress into the middle part of the single-player game, this aspect is a bit downplayed, but it is always present.

“We come in the dark” – 55th Special Operations Squadron (AFSOC)
Spec Ops: The Line clocks in at about 6 hours to complete the single player campaign, with 4 different endings for you to discover based on some of the hard choices you’ll have to make.  To extend the game a bit there are some included multplayer modes to enjoy as well.  While 2K/Yager promise we’ll see a cooperative play addon (the game really does seem like it’d be a good fit to play with a friend) as free DLC in the future, it’s not present in the shipping product.  What is included is six multiplayer modes.

Rally Point is capture and hold, Uplink is the same concept but with less capture points.  Attrition instantly reminded me of Counter-Strike with each side getting three rounds to achieve an objective.  Deathmatch and Team Deathmatch join the fray, if that’s your thing.  Rounding out the last mode is one called Buried, which asks players to take out objectives to reveal a high value target to win.  The modes feature character classes that grant additional perks like bonus damage while in a sandstorm, additional damage while ziplining, extra health and more between the two factions.  You’ll also earn experience that unlocks perks (there are over a dozen and you can equip 3 after you unlock them), tags, and such, in a very familiar way.  The classes have two unlocked right off the bat, with three others unlocking at 3, 6, and 37th level.  Here is the hitch…nobody is playing it.  I’ve tried for several days to find more than one more player playing multplayer and have been completely unsuccessful.  The game supports LAN play, but right now it seems like multiplayer is not resonating with the community.

“These things we do that others may live” – USAF Pararescue
Spec Ops: The Line isn’t a perfect game.  The multiplayer is essentially a miss, the gunplay is somewhat formulaic, and the controls have a bit of a snag, but it is a great return to the franchise.  The (sometimes very) dark subject matter explores the horrors of war, pressing players to make awful and meaningful choices that have consequences well beyond the game.  It asks questions about what you would do to survive, how far is too far, and what lines you might cross if it meant accomplishing your mission.  How many sacrifices is one too many?  When do you pass that point of no return where your very soul is damaged?  My hat is off to the folks at Yager and 2K – in a world of predictable shooters they have given us a compelling and thought provoking shooter worth experiencing.