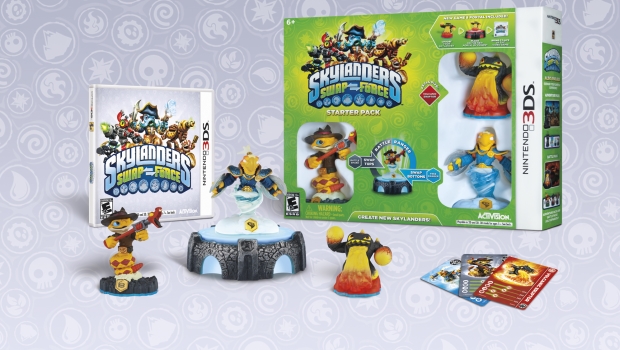 I have already written an extensive review of the Skylanders: SWAP Force for the Xbox 360 and covered a lot of ground. You might think this review is redundant: think again. The behaviour of the SWAP Force game on the 3DS is entirely different from its home console counterparts – in fact, the game doesn’t even happen in the same setting though the SWAP Force has been freed. This review will discuss some of those differences and whether or not they make the 3DS version a unique experience from other platforms.

[singlepic id=16623 w=320 h=240 float=right]First up is the difference in story. Rather than going after Kaos, we’re treated to a villain known as Moneybone, who launches a surprise attack during the unveiling of a solid gold statue of Flynn , the self-proclaimed “Greatest pilot in the Skylands” and friend to the Skylanders, and in the process snatches up Cali, another main character from previous titles. Flynn is beside himself – we need to get that statue back (oh, and maybe Cali too)!

Gameplay is similar to the console version in that we follow predetermined branching paths and have both single element and dual-element gates, keys to find and items to collect – however all the gold collected gets converted to experience at the end of each level. In fact, there are no purchases you can make with the gold, be they hats or upgrades – instead, level progression unlocks skills as you progress. Other major differences include a double-jump, types of stat boosts given from the hat your Skylander is wearing, and the way in which different difficulty levels affect the challenge in the environments (eg: on easy a platform may not move, where on medium it may be spinning or floating up and down).

[singlepic id=16624 w=320 h=240 float=left]You also have a wireless, 3x AAA battery portal to import your Skylanders into the game. After that, they live inside the game, meaning you’re not stuck with dragging the portal or the Skylanders toys along. The portal isn’t useless after though – as you can synch your Skylanders, especially if you have another version. Your experience from other games still counts, and any experience earned in the 3DS game gets added to the toy during the synch process.

The 3DS version includes two SWAP Force characters, Rattle Shake and Free Ranger, as well as core Skylander Volcanic Eruptor. This works really well, as 3DS owners get three different characters from all of the other starter packs, and helps grow the collection without duplication.

[singlepic id=16625 w=320 h=240 float=right]I don’t spend a lot of time on the 3DS in my house – it is my son’s and I’m not much for hand-held gaming. That being said, this is a fantastic extension to a game/toy collection – it adds value to the game experience. I found that while the graphics were toned down and the gameplay and combat is far simpler, it was easy to pick up and play, and since there is no need to drag around the portal, it was refreshingly straightforward.

I also like the difference in story – Vicarious Visions and Activision were right to avoid a retread as I don’t think it would have gone over as well. If there was one thing I’d nit-pick, its that you can’t use the D-pad to control direction – and while I love analog joysticks, I find the one on the 3DS to sometimes lead me to fall off ledges. I also thought the touch-screen interface, which is reserved almost exclusively for swapping Skylanders, could have been used to also see the combos available without having to pause the game.

[singlepic id=16626 w=320 h=240 float=left]Since this review was written before the game’s release, I did not get a chance to try out the borrow function of StreetPass, where you supposedly can try out a Skylander of someone you’ve passed by but don’t have yourself. Sounds intriguing – the console version has a preview event when you collect soul gems, but all it does is play a brief video showcasing several attack moves.

My recommendation? If you’re into Skylanders, or your kids are, this one is a no-brainer. It’s a fantastic supplement to any existing Skylanders game as it adds value to your collection of toys. Even if you don’t have any other versions on other platforms, SWAP Force on 3DS is a decent 3rd person 3D platformer. Just don’t expect a 3DS interpretation of the console SWAP Force game – it stands on its own pedestal, and it can fit your toy collection inside a pocket.