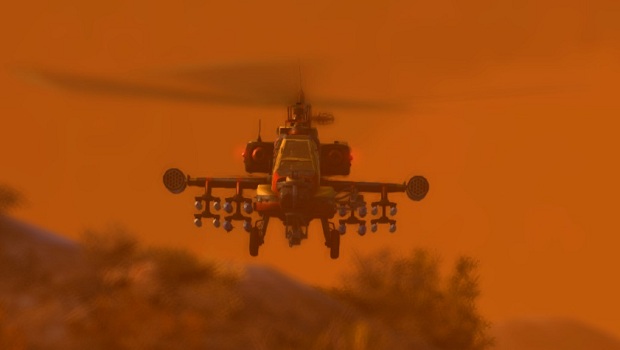 Some games have elaborate storylines, believable characters, and plot twists that pull on your heartstrings. You aren’t just going through the motions, mashing buttons; you’re invested in what you’re doing and why you’re doing it. It’s a rare and magical phenomenon in games when well executed, and a frustrating disappointment when promised but not delivered. Luckily, Thunder Wolves doesn’t promise any of this. It’s fun in its simultaneous simplicity and melodrama.

In the vein of games like EA’s Strike series, Thunder Wolves places you behind the reins of an attack helicopter (and occasionally other vehicles) and tasks you with causing varying degrees of mayhem and destruction. There is a storyline present, but it exists mainly as a delivery mechanism for over-the-top macho humor and an excuse for you to blow things up. Speaking of blowing things up, I think it’s safe to say that particular activity takes up approximately 90% of your time in the game, with the remainder being spent travelling to new places to blow things up and watching a few cutscenes that try to explain why you’re blowing things up.

[singlepic id=12609 w=320 h=240 float=left]Other than that, the game does little to hinder you in your destructive quest. Your helicopter is equipped with a chaingun that never runs out of ammo or overheats. For taking out heavier targets, you’ll have a selection of regenerating rockets and missiles to choose from. The armor is generous enough that I didn’t even come close to dying until several missions into the game on Normal difficulty and, although the mouse and keyboard obviously weren’t designed to maneuver a helicopter, the controls are pretty forgiving.

Even though the goal is pretty singular, the game does make attempts to mix things up a bit. On several occasions, you abandon your helicopter for a stint manning a tank or aiming down the scope of a sniper rifle. Unfortunately, this doesn’t manage to keep the non-stop high-octane action brofest from getting a little stale at times. Later in the game, I found myself sometimes wishing that the game demanded something more of me than just thoughtlessly firing at whatever targets were currently lit up on the screen.

[singlepic id=12610 w=320 h=240 float=right]That isn’t to say that the game is never challenging— close calls with enemy choppers and anti-air guns will require well-timed use of flares and targeted missiles— but it is very rarely stimulating. No real strategy is required; just shoot in the general direction of your targets and nine times out of ten, you’ll succeed. As one character remarks near the start of the game, “This ain’t rocket science, kid. It’s just rockets.”

Although the environments you’ll explore (and susequently pummel with explosives) are surprisingly varied, Thunder Wolves’ graphics are nothing special. The soundtrack is non-stop guitar shredding to match the fast pace of the game and the voice acting likewise compliments the over-the-top gameplay. It makes the characters likeable (if not memorable), which is quite an accomplishment when they’re delivering such ridiculous lines.

[singlepic id=12607 w=320 h=240 float=left]Thunder Wolves is a game that makes no qualms about what it aims to accomplish. Equal parts gratuitous shoot ’em up, explosive action, and “EXTREME” dialouge, the game’s self-awareness keeps it from feeling too self-indulgent. The nostalgic charm is fun enough for a while, but after three hours of explosions and accompanying “Nice one, bro!”‘s there isn’t much to come back to. That doesn’t mean that the game isn’t worth a try, especially if you were a fan of the 90’s titles it draws inspiration from, but I think the current price tag may be a little high for the amount of gameplay you get.