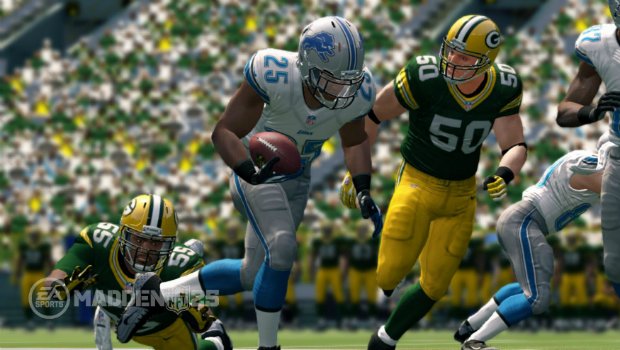 After 25 years of Madden NFL video games, we football lovers have had our fair share of triumphs and defeats.  We’ve pounded the rock, slammed the hit stick, controlled the vision cone, and succumbed to Gameflow playcalling.  We gridiron gamers have seen the Madden curse strike at the knees and careers of many a “season before” baller in what has become an eerie coincidence with real-world implications.  Over the years, we’ve seen our game evolve from 8-bit obscurity to a near-perfect capturing of the on the field experience.  Even through the hard times, the miscues, and the controversial changes, Madden has always been there, year after year, trying its best to be more than just a glorified roster update.  With Madden NFL 25, EA Sports has finally struck the chord they have been seeking for a quarter century.

[singlepic id=15688 w=320 h=240 float=left]Madden 25 is the most ambitious venture ever taken by the Madden team.  EA added a glut of changes and enhancements to every single facet of the sport.  The focus of many of the changes is in the way the ball is ran, stemming from the new Precision Modifier.  With the press of a button, spins, jukes, cuts, and dives become more controllable and situational than ever before.  For example, a normal press of the dive button will allow you to dive to avoid contact, but with the precision modifier pressed, the player will stretch out to gain extra yardage.  It’s up to the player to determine when that risky move is needed, whether on a key third-down conversion or on the goal line.  In addition to the stretch, dive plays at the goal line with the precision modifier held makes the runner leap up and over a blocker to push for the score.  This is just one of many expansions to the classic running setup, as the precision modifier pushes the number of available running functions from 8 (the four buttons and the right stick) to 30.  That’s a massive jump.  Unlike in recent years, where acceleration is applied automatically to your run, Madden 25 returns sprint control to the players.  When sprinting, every button has a different set function in that mode, be it a specific spin, stiff-arm, or juke suited for the speed situation. Both the sprint and the Precision Modifier work the same, just as sprint always has, by holding the button down.  It’s a simple change that really goes a long way towards true, total control.

[singlepic id=15689 w=320 h=240 float=right]That change alone would merit unbridled joy, but the Madden team has done their work to tweak many aspects of the game.  Playbooks have been changed to better mirror current NFL offenses, with an emphasis on the pistol and read-option schemes that are being introduced across the NFL.  351 new plays have been added.  To allow these complex running plays to actually work, blocking animations have been changed to be more effective, and the AI for blocking is absolutely stunning, especially on screen plays.   Defensive animations and abilities have been altered to allow for more accountable AI and better differentiation between a superstar defender and middling player.  The developers made the AI more fair across the board, though they may have gone too far in nerfing CPU pass defense.  This is the only major problem that Madden 25 suffers from in the actual games, and it can be alleviated slightly by the adjustment of game sliders.

[singlepic id=15690 w=320 h=240 float=left]Madden 25 is the most beautiful on-the-field experience of any Madden title, far and away.  The player models are clear and detailed, the uniforms look great (aside from Jacksonville’s repugnant new duds), and the field and the crowd are as lively and crisp as ever.  On-field sounds are more real and diverse than ever before, with player interaction and stadium ambiance balanced and enveloping.  The animations of the players on the field are as great as ever, thanks to the revolutionary Infinity Engine.  Unfortunately, there are some goofy little issues that need to be addressed over time.  In particular, players will sometimes get twisted up in the pile, with legs bent all the way back and arms contorted in a mangled mess.  It hasn’t resulted in a turnover or freak injury yet, though the fear that it might is present.  Also, runners will take longer than usual to be called down, due to a defender underneath him and a weird glitchy animation that keeps you from hitting the turf.  Besides those two strange problems, the Infinity Engine works fine and looks absolutely stunning.  Big hits are bigger than ever, catches down-field are acrobatic, and the trenches are as nasty and unpredictable as ever before.

[singlepic id=15691 w=320 h=240 float=right]In another huge improvement Madden 25 changes the way game modes are presented.  Rather than having two separate modes for the Be a Pro and Franchise, all have been combined in the new Connected Franchise.  In Connected Franchise, players can choose to be a single player, the coach of a team, or the big shot owner of the franchise.  Each choice comes with its own set of goals, tasks, and responsibilities.  As a player you’re tasked with holding down your position and improving your national standing.  As you progress in practice as well as in games, you’ll earn experience points which can improve the stats and abilities of your player.  You can create your own rookie player, be a current NFL player, or play as a legendary player and attempt to rewrite their career in the modern era.  As a coach, you control the entire team in games and have all of the options that have come in standard franchise modes.  Again, the three options of created coach, current coach, or legendary coach are available.  Lastly, players can choose to be the actual owner of the franchise, which gives the player complete control of franchise operation and income generation.  While the games will still be user controlled just like in coach mode, owners can make changes to the prices of tickets and in-stadium amenities, control the payroll and the staff, deal with the media and the public, oversee changes or complete renovations to stadiums, or uproot and relocate the team to one of 17 locations.  Ever wanted to see a team in Toronto, London, Los Angeles, or Oklahoma City?  That is now a very real possibility within Madden 25.

[singlepic id=15692 w=320 h=240 float=left]Perhaps the best reintroduction in the game (and a huge victory for the players against EA) is the ability to control all 32 franchises locally within one offline Connected Franchise.  In the past few years, EA had taken multi-team franchises out of the game, attempting to drum up sales and forcibly promote online franchise play.  It must not have worked, because Madden 25 will once again give complete league control to the players.  Couch-bound Madden buddies rejoice!

The Ultimate Team game mode is relatively unchanged, aside from the reintroduction of the Chemistry schemes.  With Chemistry, Ultimate Team players can choose what style of offense and defense they want to play and make changes to their lineups based on the chemistry that certain player cards are set to.  In addition, smart lineups by position can make your team especially deadly.  Other modes, such as the Never Say Never Moments (the best moments from the year before and the current season, updated weekly), Online Head-to-Head, Practice, and Play Now are of course available.  In addition, Madden 25 has a Skills Trainer that teaches players how to use the various new functions.  It is an absolute must even for seasoned players and can yield Ultimate Team cards after completion.  Each of these are pretty standard and unchanged from year to year, and nothing has been done to change it now.  The EA Arena is a new addition that pits players against each other in online play for cash prizes.  Lastly, a file-sharing function named Madden Share allows for quick browsing, uploading, and downloading of shared rosters, playbooks, sliders, and more.

[singlepic id=15693 w=320 h=240 float=right]The only real downside is outside of the games themselves, in the menus.  While they have been stylized and look better than they have in the past few years, they are rife with clunky loading lags.  Going one page too far past your target can be a frustrating and time-consuming endeavor.  Like Madden 13, the EA Trax have been abandoned in favor of an orchestral soundtrack for Madden 25.  This is a double-edged sword–it’s great to avoid the painfully bad playlists of previous Madden titles, but the orchestra is overly bombastic and gets irritating after a short while.  Many of the menus within Connected Franchise are also hard to navigate, though time will likely familiarize players with the way everything works.  Many of the lag problems may be fixed in later updates, and with some well-planned updates through the year, the Madden team can really push this game up into the next echelon of greatness.

With all of the great changes and smart moves made this year by EA Sports, Madden NFL 25 is a surprising success in nearly every facet of sports gaming.  While there are still small issues that need to be worked out, Madden 25 is a vast improvement over the lackluster entries in the series over the past few years.  The game simply delivers. With Madden 25 being such an outstanding release in a long list of yearly attempts, we should put aside our long-standing animosity with Electronic Arts and give them a thankful round of applause.  It’s taken 25 years, but they may have finally got it right.