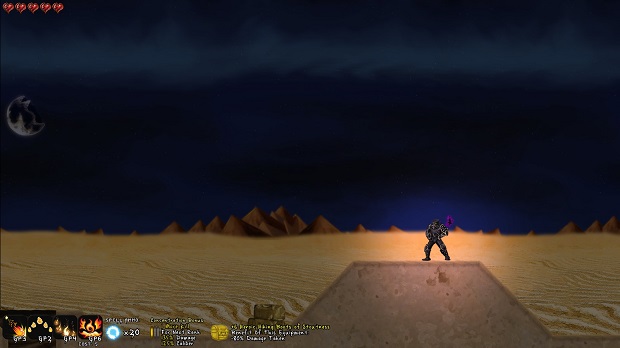 I’m at a loss here, folks. I asked to review A Valley Without Wind 2 because I was really impressed by Arcen Games’s first effort. Titled AI War: Fleet Command, it set you against a much more powerful foe, but balanced the challenge by giving you unique and varied strategic options. AI War is a great strategy game, and if you can get past the daunting interface, you’ll find a lot to like in the endless unit selection and massive fleet engagements. Arcen Games’ latest release, A Valley Without Wind 2, seems to share a lot in common with AI War—a strategy game in which you’re tasked with destroying a much more powerful foe, etc.–but cuts all of AI War’s strategic depth in favor of bland, frustrating platforming.

A Valley Without Wind 2’s storyline doesn’t seem to connect to the original title in any meaningful way, though it does share some of the same overtones. In both games you lead a rebellion against an Evil Overlord (named Damonaica in Valley 2). The story could be really interesting, if a bit cliched (the “defeat the evil overlord” plotline is a bit overdone in fantasy storytelling) but Valley 2’s story is about as shallow as you can get. There are a few basic gestures towards depth, implying that your character has a dark current in their personality, but those are just a few lines thrown in here and there. It would have been nice to see a bit more depth brought to the characters in this game, it’d be nearly impossible to string together a coherent story, due to the procedural generation the game is built upon.

[singlepic id=11014 w=320 h=240 float=left]The thing one has to realize when one picks up A Valley Without Wind 2 is that nearly everything is randomized, including character creation. In a game with RPG elements and a character creation screen, you might expect some creative control, but you’d be wrong. All you can do is specify a gender and a general appearance, and then click “Reroll” until you find a character you like. What’s worse is that some characters are objectively worse than others; they might have less health, or a lower attack, meaning that unless you’re really hardcore, you’ll spend a few minutes simply rerolling characters in the hope of getting a rare character with decent stats.

But the randomness doesn’t stop there. The world map is different every time you start a new game, and many maps are harder than others. In my first game, I never saw a Level-Up Windmill (it does exactly what you think it does) but on my second playthrough I had three within walking distance of the starting position! In the first scenario you quickly ran into a wall where the player is so underpowered that progress is impossible, and in the second you’re so overpowered that the game is boring.

The worst part, though, is the procedurally generated platforming levels. These stages play out like other side-scrolling shooters like Mega Man, Contra, or Gunstar Heroes, but without any of the meticulous design that made those games interesting and fun. First of all, all of the levels feel very bland. There are different environments—swamps, cities, forests and so on—but except for the colors of the tiles used they all play exactly the same: move to the right until you destroy the wind-generator at the end of each level. What’s worse is that the levels seem so utterly illogical. You’ll find ladders that climb to nothing, you’ll explore caverns that have no treasure or powerups, and you’ll see blocks hanging in midair for no purpose.[singlepic id=11016 w=320 h=240 float=right]

Because of the generic, randomized level design, you’ll very rarely have any challenge with platforming, so don’t expect to see any Mega Man style jumping puzzles. Honestly, though, that’s probably for the best because jumping causes the camera to pan so high that it makes landing with any accuracy a real chore. So you can expect to spend most of the game in side-scrolling shooter combat. Terrible side-scrolling shooter combat.

One of the few good things I can say about A Valley Without Wind 2 is that the creature design. You’ll face a collection of bizarre enemies ranging from disc-throwing automated men to the fearsome skarktopede (a creature that looks like a shark with hundreds of tiny legs under it.) Unfortunately, while the enemies look really cool, in action the enemy design seems perfectly calculated to frustrate and annoy. Go ahead and think of you most hated type of enemy. Got it? Okay, great. It’s in this game. You’ve got tiny enemies that run under your attacks, you’ve got short ranged bruisers that are immune to ranged attacks, you’ve got enemies with attacks that are impossible to dodge, you’ve got enemies that block your attacks, you’ve even got enemies that spawn more enemies. There are even enemies that hide in the terrain that you’ll never see them until you get blindsided by their attacks.

[singlepic id=11015 w=320 h=240 float=left]You want to know what puts the icing on the cake? There is zero benefit to killing the bad guys. You get no experience for killing them, nor do you get any resources for the tactical sections of the game. There’s no reason to fight in this game; you’re much better off simply running to the end of the level avoiding all hostile contact.

The other part of the game is the turn based strategy played out on the world map, and while it isn’t great, it’s a big step up from the platforming levels. Your goal in this part of the game is to escape from the evil overlord Demonaica with the rest of your merry band of resistance fighters. Much like in AI War, if you try a direct assault on the Big Bad, you’ll crushed. Unlike in AI War, however, you can’t bide your time to plan and ready your forces for guerrilla strikes. Your only option is to flee, and you’re constantly under immense pressure

Most of this pressure comes because the other members of the resistance are militarily useless. You can use them to build structures and to gather resources, but moving them off of the very few safe tiles will result in them dying very quickly. What’s more, you can’t keep them in the safe tiles very long because the AI spawns monsters to hunt your resistance members down. This puts you into a lovely catch-22: move your units and they die, or leave them where they are…and they die. The tactical aspects could have worked, with a bit more time spent in them, but it’s little more than a shell surrounding the abominable platforming. You’ll rarely spend more than two or three minutes looking at the world map before diving into a level.[singlepic id=11020 w=320 h=240 float=right]

The biggest problem with Valley 2 is the clumsy, imprecise controls. The game all but demands you use a gamepad, though if you want to do a bit of work in the menu system you can eventually enable mouse/keyboard controls. If you’re playing with a gamepad, you’ll find that the platforming and combat levels of the game are utterly impossible. The enemies in the game are too fast, too small, and too numerous for the clumsy dual stick aiming to work. Stick with the gamepad and you’ll find yourself dying left, right and center. There was also a really strange bug where the game would interpret single presses of the A button as a double-tap when moving through menus, which resulted in me having to undo a bunch of commands every turn. Switching to mouse/keyboard at least gives you the ability to aim with the precision required to survive minutes, so if you’re ever forced to play Valley 2, go ahead and enable mouse aiming.

[singlepic id=11019 w=320 h=240 float=left]Graphically, A Valley Without Wind 2 is unremarkable. The environments are pleasant enough, and the different locations all have unique backgrounds and scenery which try to give some sense of variety. However, the randomization inherent in level design means that all of the levels feel samey and bland in spite of the scenery changes. The only visually interesting thing you’ll see on screen is the enemies, but you’ll be too busy hating them to notice the interesting designs and nice sprite animations. Oh, and while each character in the game has a unique look, character portraits are drawn from a really limited well, so you can expect to see lots of the same four or five faces with each new person you meet.

Unfortunately, the audio in A Valley Without Wind 2 is pretty bad. The music is decent, but you’ll rarely ever hear it under the ambient sound effects, because the sound effects are insanely loud by default. On top of that, they’re incredibly generic and annoyingly repetitive, so you’ll probably just want to mute the game all together and put your own tunes on in the background if you chose to play Valley 2.

When you get right down to it, A Valley Without Wind 2 is just a bad game. I can’t think of anybody who I’d recommend play this title. The heavy use of randomization means that all the character is sucked out of the game, while the awful controls leave this a title devoid of any fun. Pass on this title, and go play AI War instead; you’ll be glad you did.