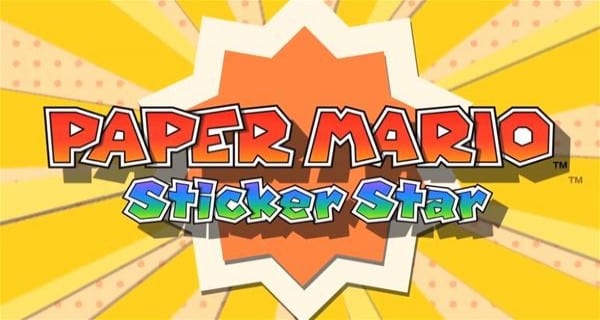 Fans of Paper Mario haven’t seen much from the franchise since Super Paper Mario for the Wii, which opted to get rid of the turn-based Paper Mario and introduced perspective-altering puzzles. Paper Mario: Sticker Star returns to the turn-based format, but replaces XP, leveling, and party members with stickers.

Sticker Star begins during the Mushroom Kingdom’s annual Sticker Festival, where the all-powerful sticker comet is poised to grant the citizens’ wishes, when suddenly Bowser steals the comet and scatters its power to different corners of the map. If this sounds familiar to you, it’s because this happens in every Mario game, but that’s okay. As always, Mario answers the call and sets out to collect all the royal stickers and reassemble the comet. [singlepic id=10327 w=320 h=240 float=left]

The story behind Sticker Star may be filled with cliches and possess not even a single character that players aren’t familiar with, but it has a special charm that makes the experience enjoyable. Many characters seem self-aware, bizarre, and make some pretty off-the-wall comments, which will give players a reason to stop and chat with every toad they can find. Overall, the game seems to combine more of the same, with a unique flair that Sticker Star can call its own.

Sticker Star’s gameplay revolves around collecting stickers, which are constantly found, bought, or won from battles, and using them to solve puzzles and win fights. To win boss fights and solve many puzzles, Mario will also need to find “Things,” three-dimensional objects, and turn them into powerful, and aptly-named, “Thing Stickers.”  Unfortunately, once you use a sticker, you lose it permanently and must find it another one, which means that you’ll spend a lot of your time looking for the right sticker that you need to solve a puzzle or defeat an enemy, and herein lies the game’s biggest flaw.

Sticker Star is a game that seems to encourage experimentation, as you’ll need a very specific sticker in order to solve many puzzles or defeat certain enemies, but the game does a poor job of pointing the player in the right direction, and a failed attempt means the player loses the sticker and must buy it again. Since most puzzles require a “Thing Sticker,” this proves especially problematic, as these things are hidden extremely well, and the game never tells you if you’ve found them all in each level. If the player reaches a point where they are unable to proceed, their only choice is to spend all of their valuable coins trying out stickers to clear the path, usually only to find that they don’t have the right sticker to solve the puzzle.

Even worse, the puzzles usually have a single solution; if you’re trying to cool off a volcano, the refrigerator sticker won’t do it, neither will the air conditioner sticker–no, sir;  the game will require you to seek out the shaved ice. Defeated, players will then have to revisit the game’s sizable amount of levels, and relentlessly search for the sticker they need; the game has 96 different normal stickers, and 64 “Thing Stickers,” so this is no small task either. Additionally, “Thing Stickers” are extremely expensive, and using them incorrectly results in you losing the sticker, and being forced to buy it again, so you’ll probably go broke quite a few times while trying to solve a puzzle. The result is that Sticker Star is a game that won’t stump you with its puzzles so much as it will present an unsolvable ones that require the player to grind levels in search of missed stickers and extra coins to fund their attempts. As you might imagine, this can be an extremely frustrating experience. [singlepic id=10329 w=320 h=240 float=right]

The combat in Sticker Star is pretty fun, and gives the player plenty of opportunities to test out all of the stickers in their repertoire. Players select a sticker, and use it as they would use a move in any other turn-based game, and doing so causes the player to lose their sticker. To truly master combat however, players must learn to use the wheel (a mini-game that gives the player a chance to play multiple stickers in a single turn) in order to do major damage. Although the combat is entertaining, as I mentioned before you’ll be revisiting levels quite a bit, which means at some point you will want to burn the Mushroom Kingdom to the ground after your fifth consecutive battle against three spiked shell koopas. The boss battles are far more exciting, but are also hindered by the game’s fatal flaw.

As I mentioned before, Sticker Star’s primary game design is requiring players to use a very specific “Thing Sticker” without providing the player with any way of knowing if they have found all the stickers that they need. Unfortunately this problem extends to boss battles, which are so challenging simply because they require the player to use a specific sticker at a specific time during the course of battle. Worst yet, Kersti (your royal sticker companion) won’t give you a hint until the middle of the second time you face the boss! This means that players will have to face the boss twice to no avail before they can get the “Thing Sticker” that they need and head into battle prepared, which makes each boss battle tedious, unfairly challenging, and downright mean. [singlepic id=10328 w=320 h=240 float=left]

Despite the game’s core flaws (which might be enough to throw down the game for good), the game is actually quite fun otherwise. During the rare moment when you come well-prepared to a boss fight on your first attempt, or happen to have the right “Thing Sticker” required to solve a puzzle on your first run-through, the game’s charm really shows. Enemies (when not over-fought) are interesting and varied, and the puzzles are occasionally clever and fun to solve.

The Mushroom Kingdom looks beautiful in Sticker Stars. Beholding familiar environments that we’ve seen for years converted into two-dimensional origami and castles built out of cardboard will make players smile, and puzzles constantly remind the player that the world is made of paper, breathing new life into a world we’ve all known before. The 3D animation in Sticker Stars is some of the best I’ve experienced on the 3Ds, and the idea that an intentionally 2D world is playable on a 3D device is enough to make most gamers giggle.

The music is even better, as each area has its own sound to match its mood, and battle music gets the blood pumping. The game also has a few unexpected musical numbers (yeah, really), which never hurt a game with so much good sound already. The sound effects are more of what players expect from a Mario game, which means you’ll be hearing the hero’s iconic jumping sound more than a few times (like during battles that have you jump literally 100 times in succession).

The bottom line is that Sticker Star is a generally enjoyable experience filled with long stretches of utter rage induced by poor game design.  If you’re paying full price for the game, you’ll certainly get your money’s worth with tons of levels, more than a hundred stickers to search for, and more boss battles than the average Mario game, but I’d suggest taking a few breaks, because you will inevitably get stuck. The flaws won’t necessarily ruin the experience by any stretch of the imagination, but I wouldn’t recommend it to anyone who doesn’t have a high-tolerance for repetition, or to anyone with high blood pressure. If you’re a fan of the series (and who isn’t?) who wants to experience a portable game with great graphics, some truly hilarious moments, and you don’t mind some unfair challenges, then Sticker Star is right for you. 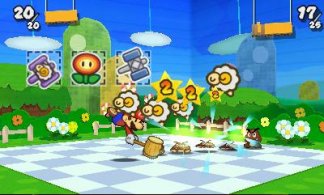 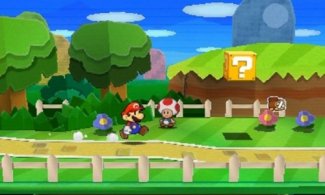 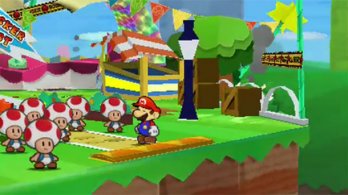 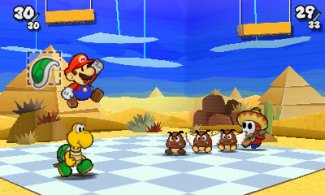 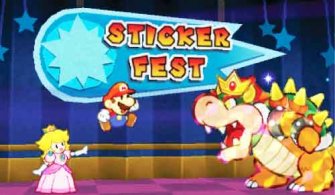 Wait, Bowser created mischief by breaking something into pieces that Mario needs to collect? SHUT UP! 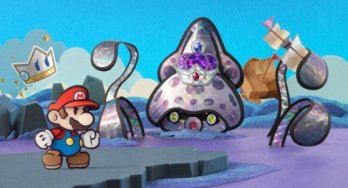 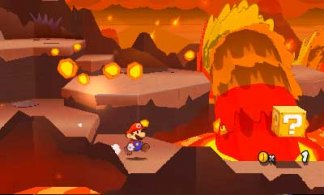 “Hmm…where in the world is that sticker I need?”