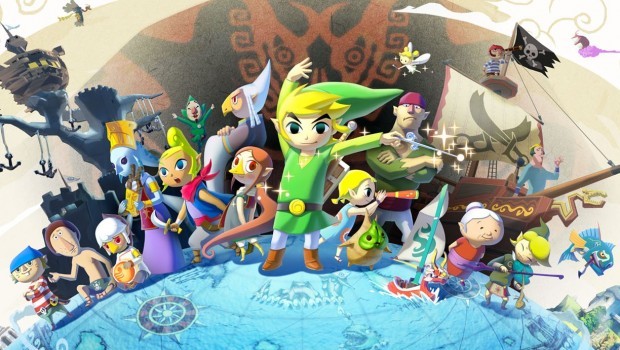 The Legend of Zelda: The Wind Waker is not the game you remember.

You probably remember the fantastic cartoon aesthetic, how full of emotion Link’s eyes were, how absolutely blue that ocean was. You’ll also probably remember sailing that ocean, exploring the breadth of its tumultuous waves for sunken treasure, and scouring the dotted islands for secrets.

You gloss over the glaring pacing issues, because you want to believe that what you played was near-perfect. The obvious padding of the Triforce quest wasn’t nearly as bad as everyone says it was, right? You forget how empty and kind of pointless the giant expanse of water really was, that there’s so much wasted space, with minutes of thumb-twiddling between destinations.

When you hear that Nintendo is planning on re-releasing The Wind Waker in HD, your heart skips a beat. Holy crap, that game was amazing, you recount to yourself. You finally get your hands on it again, for the first time in ten years.

All of the memories come rushing back.

[singlepic id=16171 w=320 h=240 float=left]The first thing you’ll notice is how vibrant everything looks. The Wind Waker was a fantastic-looking game on the GameCube. Nintendo decided to gamble on an animated veneer over a more realistic approach, and it paid off in spades. With the HD treatment, The Wind Waker looks better than ever. It’s a wonder how expressive Link’s eyes are, how they dart back and forth as you move around the world, his strikingly blonde hair bobbing as he runs. There are so many little touches — a goofy little sprat with a giant stream hanging out of his nose; puffs of smoke swirl in the air as baddies fall to your sword; currents of jet-blue water lap at the side of your boat, its sail tugged taut by the wind. There are a few bouts of slowdown when tons of effects all go off at once, or a split-second of draw distance pop-in, but these moments are few and far between — graphically, The Wind Waker HD is in a class of its own.

Things go at a fairly nice clip at first. There’s an awkward stealth bit at the beginning, but it’s easy to overcome. The first third of the game follows the typical Zelda formula (wander the overworld, find a dungeon, solve its puzzles, repeat), but the pacing is brisk and effortless. Sailing is fun, the items (a grappling hook! a leaf that lets you glide!) are, save for the requisite bombs and arrows, unique and interesting. This feels different than all of the other Zelda games. It feels special.

[singlepic id=16172 w=320 h=240 float=right]There are a ton of nice little touches added to the HD version. Having access to your inventory and map on the GamePad at all times is a godsend. You can even have one of your treasure maps open next to the main map, so you can find exactly where you are and where you need to be in an instant. The internal gyroscope helps with fine-tuning your first-person aiming. There’s even a special sail you can earn from the auction house to increase your sailing speed and keep the wind at your back. This is such a huge time-saver that, in the coming hours, you’ll begin to wonder how you ever got by without it the first time you played.

After collecting three MacGuffins (in this case, orbs), you’ll enter the second act. Link’s adventure opens up tremendously at this point, allowing you to sail freely, exploring the world and tackling objectives in any order you like.

This is also where it all unravels.

The Wind Waker quickly turns from a valiant seafaring odyssey to one long, drawn-out fetch quest after another. At one point, you’ll need to access one of the two islands required to power up the Master Sword. But, to get there, you need a special item. Time to go find it — but wait: the island that has the item you need is covered in lava, and only the ice arrows can freeze the mountain long enough to enter and claim its prize. And so begins another trek to a different island, etc. etc.

The Wind Waker is filled with an enormous amount of downtime. Every time you want to change the wind’s direction, you’re required to pull out your baton and play a special tune. Same goes for teleporting or taking command of certain characters — there are two dungeons that require persistent use of the latter, and you wonder why there wasn’t just a simple button press that could have sped up the whole process. In fact, you’ll wonder why the GamePad — which lists all of the songs you learn — doesn’t just let you access each one with a quick tap, rather than going through the same, drawn-out motions every single time you want to make something happen.

[singlepic id=16173 w=320 h=240 float=left]If you’re not teleporting around the map, you’re sailing. The new sail helps out a ton, but it still doesn’t change the fact that there are long stretches of absolutely nothing to do or see on the ocean. Each grid on your map features a single, tiny patch of land — and filling in each grid of your map requires you to find a jumping fish and throw bait on it. When you run out of bait — and you will, a lot — you have to find a special store to buy more, which becomes another laborious process of its own.

And now, you’ve made it to the Triforce Quest. You thought you’d blocked it out for good, but now you have to relive the slowest part of the entire game. Nintendo has done you a few favors in making this less of a painful process; originally a three-step process involving finding a special chart, paying to have it translated, then searching for a special chest out in the open ocean, now you’ll only have to do that for three of the eight triforce pieces. The rest are hidden in the dungeons where their original chart would have been found. But all of these require either the same kind of back-and-forth fetch quest slog from before, or they require wading through wave after wave of enemies. This process didn’t add anything to the experience before, and it certainly doesn’t now.

Just when you think it couldn’t get worse, something reappears that you forgot about entirely — a sequence near the end that requires you to fight the same four bosses you already defeated earlier in your quest.

And yet, you’ll keep pressing forward. The world and its inhabitants are so effortlessly charming, the tried-and-true Zelda formula is shaken up more than ever before to actually become legitimately surprising at points (even when it can be frustrating to get through), and its story makes some unexpected connections to previous entries in the series. And the ending sequence is as epic as it ever was. It’s still a very enjoyable game, but things that you glossed over ten years ago are no longer forgivable.

[singlepic id=16174 w=320 h=240 float=right]No, The Legend of Zelda: The Wind Waker is not necessarily the game you remember. But Nintendo did what they could to alleviate some of its issues without fundamentally changing the entire structure of the game, and made it look absolutely stunning in the process. If you’re willing to power through some unfortunate pacing, you’ll still get to experience a fantastic and wondrous adventure of epic proportions, upscaled for the modern era.