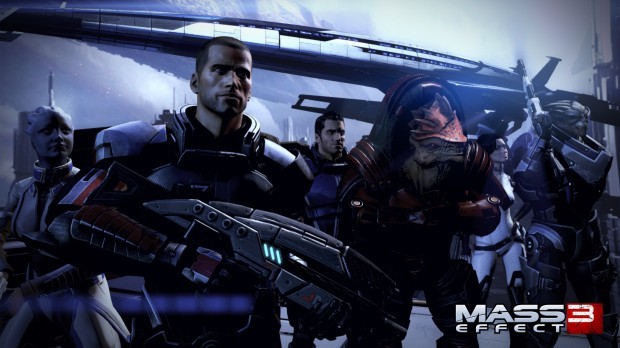 Whether you love or hate Mass Effect 3’s ending, if you’re like me then you can’t get enough of the Mass Effect Universe. Bioware has hit a few roadblocks in trying to get their very passionate community’s support back after the controversy surrounding the trilogy’s infamous ending, and lackluster offerings like the Omega DLC haven’t done much to inspire fans. Mass Effect 3: Citadel finally give players a legitimate reason to revisit the series in Bioware’s farewell to Shepard.

Citadel begins with Commander Shepard receiving orders to dock at the Citadel for shore leave while the Normandy gets some much-needed maintenance. This gives the whole gang an excuse to relax and bond while the rest of the galaxy suffers the perils of a robotic harvesting. The whole thing seems a little forced to be honest, but sure, let’s move on. Shepard has never really been one for vacations, as it turns out that even here at the recently-attacked Citadel there is a mysterious group trying to kill him. Is it the crazy-powerful organization Cerberus? Or the menacing demigod reapers? Without spoiling too much–nope. It’s another group entirely, and they’ve got their own plans for the galaxy’s favorite Commander.

Citadel is a strange beast, because the beginning will make the player get a nervous feeling in their stomach. Maybe it’s the feeling of a recovering fan still feeling the pain of past injuries from Mass Effect, or maybe it’s just the really weird way that the game sets up the DLC as a “Spring Break” of sorts for the crew, completely disregarding the very real threat of the war against the reapers. The good news is that this prologue is by far the worst part of the DLC. Players willing to stick it out will be rewarded with a hilarious new story reminiscent of pulp science fiction, and a worthy goodbye to Shepard and friends. Ah, but I digress…

What follows in Citadel’s story is a series of over-the-top plot twists and hilarious banter. It may be a little too much for serious ME fans, but my money is with fans loving every second of it like I did. Players will get the chance to fight alongside familiar faces from each of the Mass Effect games, and face a foe who is unknowingly way in over his head. It was nice to see Commander Shepard completely in control during the crisis against an enemy who seem to have overlooked the fact that Shepard is the Hercules of his time and is the last person that anyone should screw with. Some of the character appearances and dialogues seem forced, and definitely run into fan service territory, but it never keeps the player from enjoying an awesome, truly Mass Effect experience.

Graphics? Gameplay? Controls? Sound? It’s Mass Effect, people. As per everyone’s expectations, Bioware is firing on all cylinders in all categories. The game looks and sounds are just as great as you’d guess, and the intuitive controls and high-quality combat sequences are still here. So what does the DLC add to these areas? Good question, inquiring-person-who-I-made-up! In terms of sound, there’s a whole new soundtrack for Citadel, and it ties right in perfectly with the rest of the game. The combat has a few new tricks, like useable grenades, new weapons and mods, and a few other updates that came out of the recent multiplayer expansion. In short, it meets the player’s expectations, and makes a few tweaks here and there to add to the experience.

After all is said and done with Citadel’s story, players are still given plenty of Easter eggs to continue the play experience. The new area of the Citadel that has been added continues to be visit-able and gives players plenty of things to do. For example, a whole new combat simulator has been added, reminiscent of the original Mass Effect’s combat arena added via DLC, and a few mini-games are now available, such as Varren races and robot boxing, just for the hell of it.

Citadel ended up being my favorite DLC for any of the Mass Effect games yet, and I’d wager that most fans will consider it close to a Shadow Broker level. Citadel is fan service at its worst, but Mass Effect at its best. Clever dialogue, heart-warming callbacks, and enough content to make it worth the $15 price tag make Mass Effect: Citadel a worthy goodbye to a cast of characters that forever shaped gaming history.