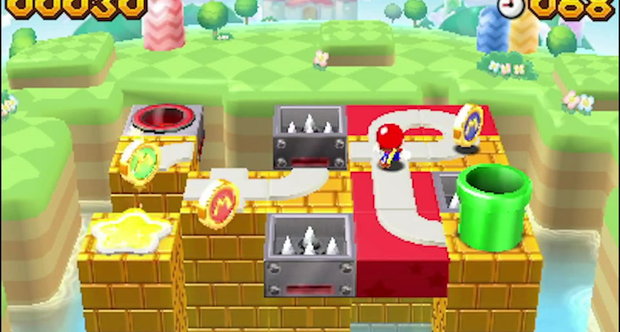 In the fifth Mario vs. DK title from Nintendo that began in 2004 with Mario vs. Donkey Kong, gaming’s oldest duo returns Mario and Donkey Kong: Mini’s on the Move. As with the last few installments, the game revolves around small wind-up figurines of Nintendo’s most popular characters, which the player is responsible for navigating through a whole mess of puzzles. Minis on the Move (MotM) takes the series into a new and refreshing direction by making the game more about controlling the environment and building the world around the minis, rather than just controlling the minis themselves.

MotM is a hardcore puzzle game. Players are tasked with guiding minis to their goal while overcoming dangerous obstacles like deadly Shy Guys and spike pits, collecting keys if necessary, and as many tokens as they can along the way. The game has more than 180 stages and does wonders in how it continues to expand upon its basic formula, challenging the player in new and refreshing ways. Just when the player has gotten into the groove of things, the game throws a curveball your way, like the ability to create raised platforms and stall time by creating loops that will need to be utilized to overcome certain maps. The game can be challenging, and even frustrating, and I have no complaints–it’s fun from beginning to end.

The game has four main modes, plus minigames, with each providing a completely different experience. In “Mario’s Main Event,” the player is eased into the basics of the game and has to guide minis through increasingly complex maps using tiles that are placed to create new paths. “Puzzle Palace”  slows the pace down as players have to strategically find a perfect solution to a puzzle. “Many Minis Mayhem” has players guiding multiple minis in an even more chaotic and fast-paced mode. Finally, with “Giant Jungle” the developers just say, “Alright! Time to say mercy!” as they give the player ridiculous, large puzzles to solve, presumably in an attempt to break your will and leave you crying on the floor–which is awesome.

I have very little to say about the controls in MotM, and that’s because they’re so good that I never really thought about it. The stylus plays the largest role as players drag-and-drop tiles, poke the minis to make them move faster, and interact with other objects in the world. You’ll figure it out right away and never think about it again, which is exactly what you want in a puzzle game.

The sound, look, and overall presentation of MotM is every bit as classic as its predecessors and true to the Mario franchise. The sound is more-or-less the same as previous games, so prepare to hear jingles that you recognize–and they’re still just as good. The visual presentation, while being simple as part of the mini-toy theme, are sometimes disappointing, because we’ve seen how visually pleasing the Nintendo Universe can be and it would have been nice to see that here. That said, the visuals are appropriate and feel like classic Mario, and the visuals aren’t supposed to be MotM’s strong suit anyway–that would be the awesome puzzle gameplay.

Mario and Donkey Kong: Minis on the Move is a great game and excels in providing challenging and enjoyable puzzles. In tweaking their formula in a major way, Nintendo has succeeding in providing new experiences to their fans, so they have a reason to keep playing. A wealth of levels, gameplay modes, and impressive game design makes MotM  worth every penny players will pay for the title.