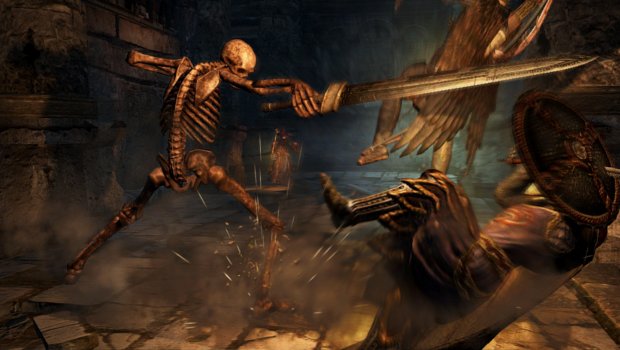 For those of you who have never had the pleasure of playing the original, let me tell you what you’re going to get from the Dragon’s Dogma universe. This is one of those games which manages to not only bring some compelling gameplay to the table, but does so while also creating an honest-to-God original fantasy world to play around in. You get the open world exploration of a Skyrim game, the at times fiendish difficulty of Dark Souls (while still being somewhat more forgiving), all spiked with the occasional heart-stopping encounters with humongous, intimidating beasts that feel like they came out of a Monster Hunter game with vastly better graphics. On top of all of this you’ve got crafting, an actually riveting story with great voice acting, and one of the most entertaining instantiations of asynchronous multiplayer that I’ve seen. And that was the original game! Dragon’s Dogma: Dark Arisen gives you all that, and more.

How much more are we talking? Over 25 new enemies, 100+ pieces of new equipment, more skills and pawn augments, along with a huge infusion of new content and the original japanese voice-overs. You also get an absolutely fantastic incentive to finally pick this game up if you hesitated when it originally came out, and slightly less of an incentive to grab it if you already owned and loved the original game. Dragon’s Dogma remains one of the absolute best titles to show up on this generation of consoles, and Dark Arisen simply adds more meat to that particular feast of tasty, tasty gameplay.

[singlepic id=11960 w=320 h=240 float= left]Now, you’re going to notice that I’m gushing over this title. Part of the reason is that Dragon’s Dogma: Dark Arisen is a fully contained game – it’s the original Dragon’s Dogma, plus new content, so it’s not like I’m just unabashedly dumping praise on what amounts to mere DLC. It’s a title I played the heck out of when it first came out, which all of my friends loved at the time, and which even in hindsight I recognize as one of the most memorable games I’ve encountered in a long while. While at this point it’s old news to me, I still can not only recognize it as a great game, but recall exactly why I thought it was a great game – and if you haven’t given it a shot yet, hopefully my enthusiasm is at least going to prompt you to check out one of the playable demos, if not run out and snatch Dark Arisen straightaway.

For starters, there’s the straight-up gameplay of Dark Arisen. This is a third person open-world game, with a pretty sizable collection of indoor and outdoor areas to explore. As I hopefully made clear with the Dark Souls and Monster Hunter comparisons, this is not an open world in the mere sense that you have a lot of territory to run or walk across now and then punctuated with some throwaway fight. The world of Dragon’s Dogma is dangerous. You’re going to be challenged by humongous, lumbering trolls, roving bands of murderous bandits, squads of goblinoid creatures, and now and then some colossal beasts that are not merely dangerous, but strike against you in a way that conjures up a palpable sense of intimidation. The controls for all of this are also excellent – I quickly found myself getting the hang of blocking attacks, looking for openings to strike against, and most importantly, hauling ass away from the action whenever it became clear that I was simply in over my head.

[singlepic id=11962 w=320 h=240 float= right]The difficulty would probably be on par with a game like Dark Souls if it weren’t for your NPC henchmen – Pawns – who you can bring along with you on your journeys, up to three at a time, one of which will be your own custom pawn. Now, funny story – when I originally played the Dragon’s Dogma demo, these henchmen immediately turned me off. They’re very… chatty. Yappy sorts who are constantly yelling advice at you, and whom I rather expected would turn out to be ultimately useless and dumb as dirt. Not so. In fact, their chattiness aside, the pawns – whose existence actually ties into the Dragon’s Dogma story in a deep way – are one of the best things about the game. Not only do they actually do a very admirable job of helping you fight against your foes, but they also tie into the game’s asynchronous multiplayer aspect. The short version is, you can create a pawn and customize it heavily – change its equipment, its fighting focus, its appearance, and so on – and then upload it to the rest of the Dragon’s Dogma online world. Other players, including your friends, can then take your pawn on quests of their own, returning them to you with the option to send an extra little gift and a rating as a reward. It seems like such a small thing, but if you have friends playing this game it’s a blast to trade tales of whose pawn did what, who was particularly good in what kind of situation, and so on.

On top of the great gameplay and entertaining pseudo-multiplayer aspects, Dragon’s Dogma also delivers on a front that I am always mindful of: loot and customizability. There are a wide variety of ways you can play your character – 9 different vocations (aka, classes) in total, each of them loaded up with a variety of skills that you’ll unlock more of as you continue to spend time in said vocations. Your pawns can have different vocations as well, leading to a nice amount of mix-and-matching freedom in order to find a team with a proper synergy. On top of all this you have a large array of weapons and armor pieces you can mix and match, as well as upgrade to more powerful versions. All that outdoor monster hunting I mentioned earlier? Those aren’t merely creatures that threaten you. They’re creatures you will hunt down in order to try and get particular drops related to upgrading those pieces of equipment to their maximum levels. For those of you who love having and pursuing treasure in video games, Dragon’s Dogma offers quite a lot to vie for.

[singlepic id=11955 w=320 h=240 float= left]There’s more to praise about Dragon’s Dogma in general – some amount of relationship-building you can engage in, the time-based side-quests, the general nonlinearity – but at this point I’ve hopefully made it clear why this game is worth dumping praise onto. Now, I’ve already given some of the out and out numerical additions that Dark Arisen adds to the original Dragon’s Dogma, but here’s where things get a little complicated. The fact is, Dark Arisen has a MSRP of $39.99. That’s a good price for someone who has never played the game before – but for someone who already owns Dragon’s Dogma, that makes it some of the most pricey DLC I’ve ever seen. Now, Capcom has attempted to sweeten the pot for previous Dragon’s Dogma buyers by offering 100000 Rift Crystals (currency you’d normally get through people using your pawns), unlimited ferrystones (used to teleport back to set locations in the game world), and a free collection of costumes. This is the one thing that leaves a sour taste in my mouth about Dark Arisen. 100k Rift Crystals? Unlimited Ferrystones? Capcom is offering what amounts to a cheat code being enabled to entice people who have already bought their game to shell out far, far more than they reasonably should be expected to for DLC. I love Dragon’s Dogma. I think Dark Arisen adds quite a lot to the original game, and for first-time players it’s an absolute bargain. But if you already have the game, $39.99 just seems like too high of a price to pay, and being offered some free in-game currency (for a non-MMO no less), some costumes and the game being made easier just seems… rather thoughtless. Value is relative, and maybe diehards could see all the new content, particularly the vast new underground area for levels 50+ as warranting the purchase price, to say nothing of the inclusion of the original japanese voices. To me, it seems like too much for those who already spent $60 on the original game.

With that in mind, the actual gameplay content added with Dark Arisen is decent, if uniquely punishing. Bitterblack Isle fits with the dour mood of Dragon’s Dogma, with most of the real action taking place in underground locales – tight catacombs with little room to maneuver around in. In fact, this is where the Dark Souls mood really came through strongest in the game, if only because this additional content feels uniquely punishing compared to most of the other portions of standard Dragon’s Dogma. Some of what you’ll run up against are re-skinned versions of old threats, but there’s a good amount of brand new enemies to deal with in this expansion. Actually, ‘dealing with enemies’ sums up the meat of Dark Arisen: this content is first and foremost for high level (45-70+) characters looking for some fresh challenges. For those who are new to the series, well… you’ll at least be glad to know that once you get up higher in level, there’s more content waiting for you than what initially would have if you picked up the vanilla game at its release. Considering how long the game has been out at this point, most past players who actually enjoyed and stuck with the title should meet these requirements easily – but again, treating Dark Arisen purely as an expansion is tough to justify given the MSRP.

Still, original owners clearly weren’t the primary target of Dragon’s Dogma: Dark Arisen, hence it being released as a stand-alone title. The real target, for better or for worse, are brand new players who haven’t been introduced to Capcom’s newest fantasy property. To those of you who love third person action and open-world exploration and who haven’t yet gone on a dragon-slaying quest, the answer is easy: this is a great buy that chances are you will not regret. Be sure to at least check out the online demo if you haven’t yet, and if you like it, pick this one up as soon as you can.