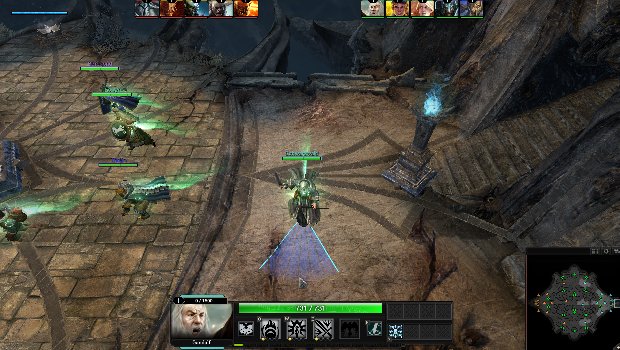 It seems like everyone is jumping on the MOBA wagon, and the fine denizens of Middle-earth are no exception. Originally launched on the 360, Guardians of Middle Earth has just seen a PC release on Steam – which means you can have Gandalf, Sauron, Bilbo, Gollum and a giant deadly spider all standing shoulder to shoulder with each other against an opposing team that’s equally heretical as far as source material goes. Since this one has already seen a formal release in the past, the real questions here are – is this still a fun game? Is it a good port? And how does it stack up against the competition at this point? The quick answer is – Guardians of Middle-earth a decent port with a few flaws, it definitely stakes a unique position for itself in the MOBA arena, but it’s ultimately a game for fans of the series as opposed to anyone looking for the next big thing in MOBA titles.

First, let’s talk about what sets Guardians of Middle-earth apart from most of the other MOBA contenders. For one thing, it’s not a free-to-play title – it’s clocking in at $19.99 on Steam, which isn’t a big surprise since it originally launched as a full-fledged 360 title. That’s not a problem in and of itself, even if MOBA games nowadays tend to be weighted heavily towards a ‘the first hit is free’ model… but between the pricing style, the 360 origin and the tie to Tolkien lore, the takeaway point here is that this probably isn’t going to be the next big thing as far as MOBAs go. It may be fun to play with friends, and even a community may grow up around it, but to be honest I’d be surprised if we even saw many more new guardians to play as with this game as time goes on. Granted, it’s launching with over 36 guardians right out of the gates (though a fair chunk of these are only available as paid DLC), so it’s not like the roster is anemic – but all the same, expect some limitations as far as the future goes.[singlepic id=15748 w=320 h=240 float=right]

That limitation also happens to be a strength of the title. The guys at Zombie Studios seem to know what sort of game they’re going for here, and as a result you can see a few things featured in Guardians of Middle-earth that are fairly uncommon most of the time. Per-guardian achievements is particularly noteworthy, which competitive MOBAs tend to shy away from for fear of making people chase after achievements rather than simply playing to win. There’s a robust co-op versus bots mode, complete with an actually challenging AI. There’s even a full-on player-versus-environment mode, letting you and up to four other guardians try to last as long as you can against increasingly difficult waves of monsters – a refreshing mode, though frankly it can quickly turn into a long, loooong match involving allies training enemies around in circles while the others either pick off stragglers or resurrect fallen comrades. The point here is that, while Guardians of Middle-earth doesn’t have much of a chance of becoming a serious MOBA contender, it makes up for that by providing a bit more actual ‘game’ than other titles of its kind tend to do.

The combat in the game is fairly standard, all told. If you’ve ever played League of Legends or similar games before, you’ll be comfortable in Guardians – the main map features three ‘lanes’ which are roughly mirrored across two sides. Two teams of five players face off against each other as streams of NPCs regularly spawn and move towards the opposing team’s side, often clashing in the center of the map. Your guardians will do their best to clear out enemies, score kills on opposing champions, level up and improve their set of powers (always following the standard ‘1 passive, 3 lesser abilities, 1 ultimate ability’ schema.) There are a few chances in the combat style here and there – all guardians seem capable of hitting multiple minions even with their basic attacks, so long as said minions are within the arc or span of their strikes – but by far the biggest change here is the lack of an in-game item shop. There’s no gold to farm or spend wisely in Guardians of Middle-earth – instead, you choose your buffs before the game begins, and wait for them to eventually get led up during the course of the match. Some players may enjoy this change of pace. Others will feel that a key pillar of MOBA strategy was taken out of the game. On top of this you have upgradeable towers, areas that can be captured to give passive buffs, a jungle to play around in and creeps to pick off for additional mid-game experience.[singlepic id=15749 w=320 h=240 float=left]

Graphically, this is a serviceable port. The visuals are nice, particularly on the guardian selection screen. The animations and sound effects do the job here, though of course the actual maps and certainly the minions are limited – purposefully, since too much variety would take Guardians even further away from being a MOBA. Some of the controls do seem a little dodgy, and as of my last play session I still found that my mouse could move the camera up, left, right… and, for some reason, not down. I’m not sure why this is the case, but it was definitely something that marred some of my experience. But that really came across as the only bug of note during my gameplay session. Some of the guardians felt unbalanced too, but really – every MOBA around has that problem, and it doesn’t seem like it’s one that ever becomes permanently solved.

If there’s one problem I’d say Guardians of Middle-earth has, it’s that – despite it very clearly being a game meant for casual play with friends and other fans of Tolkien’s famed series – Warner Bros. Interactive Entertainment still tries to pursue the MOBA model in their charging for DLC. There are a variety of bundles for sale, each for $14.99 and packing in 5 guardians and their alternate skins, plus a sizable chunk of gold to spend on unlocks and items for the game. Even if every other MOBA around tends to follow this model, something about Guardians of Middle-earth makes it seem like a poor fit. It would have made more sense to double the price of the game and simply include every guardian in the game in the box. Arguably the packs are still a deal compared to other MOBAs – 14.99 for 5 individual guardians and an alternate skin for each, plus in game currency is quite competitive when compared to League of Legends. But then again, League of Legends is a game that has a monstrous following and will likely be around for a while. Tolkien fandom may last, but I don’t think Guardians of Middle-earth has comparable longevity.[singlepic id=15747 w=320 h=240 float=right]

Still, for any PC gaming Middle-earth fan, I think this is a title worth checking out at the very least. Sure, there may not be much story here, but being able to (potentially, with paid DLC) play over 36 characters from Middle-earth and have them fight against each other is definitely entertaining. For people looking for the next big MOBA title to catch on, this probably isn’t the title for you. This one’s already out and available on the Steam store, so if you’re tempted you can just scramble on over there and snatch it up. Be sure to mutter ‘precious’ under your breath a few times if you do so.