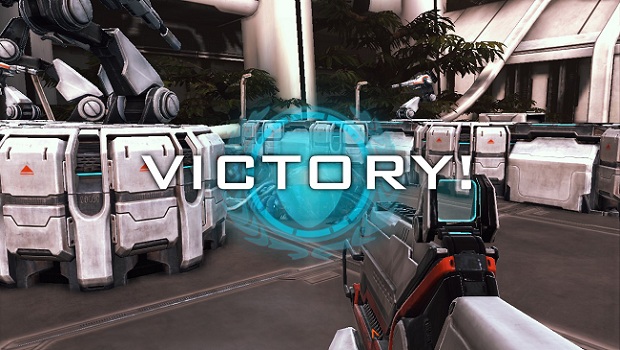 Tower defense as a genre has gained a lot of traction in recent years, thanks in no small part to titles like Orcs Must Die, Revenge of the Titans, and Defense Grid: The Awakening making their rounds through Steam sales and indie bundles. The main gameplay mechanic of “here’s a wave of enemies, now kill them” is open-ended enough to be made to fit different settings, platforms, and demographics. Heck, even Plants vs. Zombies is a tower defense game in its own way. Apparently not content with making “just another tower defense game”, the team at Coffee Stain Studios have added in a unique twist with Sanctum and its successor Sanctum 2; the Sanctum series bills itself as the first tower defense/FPS fusion and for the most part, it lives up to the hype.

[singlepic id=12298 w=320 h=240 float=left]Playing a bit of Sanctum 2’s campaign a few weeks back left me with mostly positive feelings about the game, and with good reason: it’s fun! In traditional tower defense style, each level tasks you with defending the “Core” from successive waves of enemies. Between waves you’ll be awarded resources which you’ll use to build a maze of blocks and towers to impede and attack your enemies as they approach the Core. If the Core takes too much enemy damage, it’s game over.

But rather than simply sit back and cross your fingers during the enemy onslaught as you might in a more traditional tower defense game, Sanctum 2 lets you jump into the fray. This is where the FPS elements come in; armed with a primary weapon and a sidearm of your choice, you can directly attack your foes instead of relying purely on your towers.

[singlepic id=12299 w=320 h=240 float=right]The selection of weapons reflect the games futuristic setting; experimental electric weapons are alongside the more predictable rifles and explosives. Unlike its predecessor, Sanctum 2 offers four playable characters to choose from and each has their own permanent primary weapon and special abilities. Skye Autumn relies on an assault rifle, and can double jump. Her sister, Sweet Autumn, uses the Rex and can set enemies on fire. Friends SiMo and Haigen Hawkins use a sniper rifle and shotgun, and are better suited for long-range and short-range combat respectively.

As these different “classes” might suggest, the game is highly adapatable to your particular playstyle. You can only select a few towers to use in each particular level, but there’s a nice variety available to choose from. Perks, another mechanic familiar to FPS players, can be unlocked to improve weapon damage or offer other benefits like increased agility or regenerating Core health. The varied maps and enemy types will force you to play around with loadouts and building strategies; your cannon tower is great against medium to heavy Lumes, but too slow to tackle a swarm of light enemies racing by. Even worse, flying foes will just laugh at the maze you’ve painstakingly constructed as they fly right over it.

The game has 15 levels, and finishing them all will easily consume several hours. For added replayability there are “feats of strength”– level modifiers which increase the difficulty but award more experience in return. The real replay value comes in the form of online co-op, which allows you to form a team of up to four players to fight off your alien attackers.

[singlepic id=12301 w=320 h=240 float=left]While I expected it to be the most fun part of the game, Sanctum 2’s multiplayer contains a fatal flaw that makes it unnecessarily frustrating: resource sharing, or rather the lack thereof. There is only one set of resources, and whoever manages to snag them up first gets to do all of the building. Everyone else just gets to watch. Even when playing with a cool group of people, the build phase tends to turn into a one-man show for convenience’s sake. I can’t imagine what it would be like playing with someone who was actively against sharing, and I can’t help but think there’s a better way to handle resources that keeps things cooperative instead of competitive.

Graphically, Sanctum 2 is a big improvement over the first iteration. The scenery and level design have a polish that suits the futuristic setting, and animations are well done. Revealed one page at a time between levels, there’s a well-drawn in-game graphic novel that hints at the story behind your quest to defend the Cores from the Lumes. Like the graphics, the music, sound effects, and voice acting suit the game. There’s even text-to-speech for the chat in online co-op, which is both incredibly awkward and inexplicably hilarious (every smiley emoticon becomes “colon bracket”).

[singlepic id=12296 w=320 h=240 float=right]All in all, Sanctum 2 is undeniably fun and even more undeniably an improvement over its predecessor. It looks better, it plays better, and it meshes the two genres of tower defense and FPS better. If the devs remedy the resource sharing issue in co-op, as they have hinted they might have to, I can see myself sinking a lot of time into this game. It has the variety in maps, enemies, and towers that makes a good tower defense game, and the FPS elements are just icing on the cake.