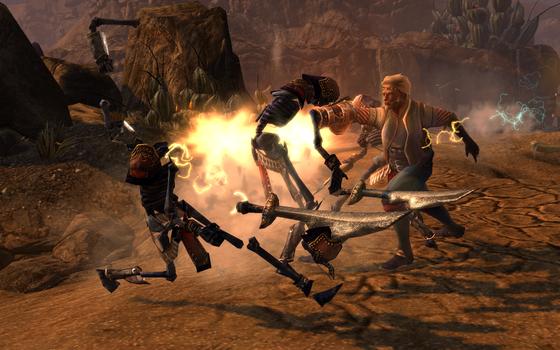 Tucked into a small alcove near the start of the Dungeon Siege 3 – Treasures of the Sun DLC is a wooden sign. Upon the sign was a warning that all who passed it searching for treasure wound up in the belly of a giant sand worm. With “Day-O” from Beetlejuice playing in my head, I decided to investigate the matter. How big could this worm be? Heck, I’d crushed so many smaller worms under my boot heel that squaring off with their big brother wouldn’t be an issue.

The tip-off came when the ground started rumbling. Sand exploded into the air around my companion and I, then out of the breach appeared a sandworm to rival the beasties in Dune. Now that’s my kind of game. Upon slaying the foul beast, I picked up a sword that I later described as my Sword of +25 F-U UP(!) because it damn near tripled my damage output, looked like a curved scimitar, and glowed blue. These are all wins in my book.

From there, I visited a nearby abbey where a nun inside described a treasure vault many floors below. Behind the doors lay who knows what, but she did tell me of a fellow Legionnaire who never came out. Thus began my quest which took me across the burning ocean of sand where I faced skeletons, giant mummies, really pissed off automatons, a deranged goblin, and more. Oh, I also picked up a metric ton of loot – ergo the justification for the DLC’s title.

Make no mistake about it – Dungeon Siege 3 is entirely about giving you as much loot as you can carry. Treasures of the Sun expands on this theme as enemies explode with loot, long buried treasure chests overflow with bounty, and your characters wind up packing serious heat by the time you close the new storyline out (especially with the level cap raised from 30 to 35). Players unhappy with their original builds now have the chance to respec their career path. The DLC starts in the Stonebridge Legionnaire Chapterhouse when you talk to a mysterious stranger in the lobby. He tells you tales of a former member of the house who ventured out to a remote abbey in the Aranoi Desert in search of… something. From there, simply hit the Causeway inside the house, follow the path, and you’ll find yourself in the desert in short order.

One of my major beefs with Dungeon Siege 3 is the spastic nature of the loot system. Rare was the instance where a weapon or piece of armor perfectly synched with your needs.  You’d find yourself picking up a weapon and marveling at how it enhanced your Attack by 25, only to discover that it reduced your Armor by 15 AND your Block by four. Whoever thought this was a balanced approach to gaming? That sort of ridiculous logic summarily renders moot 85 percent of the items in the game predicated upon the notion that players must pick up every single thing they see.

In short, a hell of a lot of the loot is nerfed beyond comprehension. And there is a hell of a lot of loot in both the game and the expansion DLC. The percentages are simply out of whack, and it doesn’t help that this issue is compounded by the low percentage yields assigned to each person’s abilities. When you can upgrade an ability to the max and the best you can hope for is a 20% chance for said ability to work, then I have to ask where the fun is in that? If I have the chance to bring significant pain to a dual-wielding skeleton or a silver Kali statue, then I want to connect on a regular basis. Maybe Obsidian figured that since most people are going to just spam the attack button, then the law of averages has to kick in at some point. Combine this with the gross differences between statistics on equipment, and one is left to wonder what the development team was thinking? Is this addressed in Treasures of the Sun? Kind of. The percentages and equipment overall seems better balanced, and some of the gear is absolutely better than anything you’ll find in the core game.

But the bottom line on Treasures of the Sun is this: Is the DLC fun? My answer is yes. And that is a yes in spite of the equipment issues because the further you get into the DLC, the better (i.e. better balanced) equipment does start to show up. In addition to the equipment, your assigned quests are fun to play. They may not be innovative, but they are sure fun to play. The result is a DLC that feels more like comfort food. I completed all of the quests in about five and a half hours but your mileage may vary. The expansion delivers two large dungeons with a whole bunch of sand dunes, side quests, and enemies in between. In an odd sort of way, it reminded me of the desert sequence in Diablo 2 more than anything else. The enemies are numerous, the quests tend to multiple one on top of the other, and there are tons of weapons, armor, and items to pick up.

The story is a stand-alone event, meaning it doesn’t affect the central battle with Jeyne Kessender. A romantic tale of love lost is the driving force behind Treasures of the Sun, but if that’s the reason you’re playing a Dungeon Siege 3  expansion then, in the words of LOLCatz, “Ur doin’ it wrong.”

The expansion does have a few gameplay tweaks which require additional scrutiny. Players now have the ability to enchant equipment and even remove enchantments after transmuting an item. To be honest, I barely paid attention to the transmute option when I first played the game. But as my inventory continually filled to the brim with nary a shopkeeper in sight I was thankful for the option to exchange my stash for gold. Go into the Item menu, select an item, then hit X to transmute and voila! Money in the pocket and maybe an extra enchantment to stick onto something different (you can enchant a single item with up to six different enhancements).

Treasures of the Sun is a nice side diversion with Dungeon Siege 3. The core game remains a fun hack-and-slash loot-a-thon, and the DLC gives you several hours more game. The dungeons are well laid out, the enemies are challenging, the loot is plentiful, the art is gorgeous, and it’s absolutely worth your time if you enjoyed the original game. Again, I’ll stress the nature of comfort food. There are times when a good dungeon hack and slash is exactly what the doctor ordered, and this DLC is worth the Microsoft Points if you enjoyed the core game. If you hated Dungeon Siege 3, then this is more of it. There’s nothing here to convince you that your original impressions were wrong. If, however, you found a lot of fun with the game, then this DLC should definitely be in your download queue.

Mitch Youngblood, aka Whiteboyskim, joined Gaming Trend in 2002 and currently serves as a staff writer and reviewer. He has crafted numerous reviews that displayed his passionate opinions on gaming and the industry at large. Some of these opinions have lead to him being labeled as "insane." He prefers the term "eccentric." In addition to his current job as a Web Content Editor in the hospitality industry, his career has proven to be a varied one with tours of duty in newspapers (such as The Dallas Morning News), IT, video and film production, and commercial real estate. A native of Texas, but without the accent, Mitch lives in suburbia there with his wife (frequently referred to as My Fair Lady) and son. His favorite games of all time are, in order, Planescape: Torment, Prince of Persia: The Sands of Time, Half-Life (the series), Grim Fandango, and The Curse of Monkey Island. Batman: Arkham Asylum is on the list too, but the list varies depending on his mood and is also subject to change depending on the moon. Stalk or follow him on Twitter at @mitchwbs. You know you want to.
Related Articles:
Share
Tweet
Share
Submit