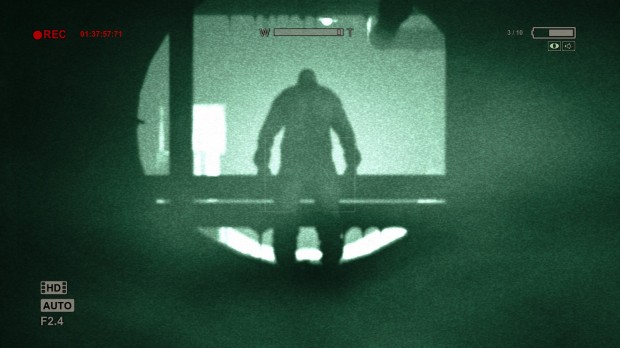 It’s two in the morning, and the hairs on your arms and the back of your neck are standing on edge. You’re a little drunk.  The lights are out, and your headphones are on–but you’ve forgotten all of that.  You’re stuck behind the lens of Miles Upshur’s camera exploring the ruined interior of Colorado’s Mt. Massive Asylum.  You could end it at any point–the escape key rests within easy reach.  God knows you want to end it.  You’d give anything if it meant you could turn on the lights and pull yourself out of Red Barrels’ debut horror game, but Outlast compels you to keep going.  For you and for Miles, the only way to get out is to push forward.

[singlepic id=15807 w=320 h=240 float=left]Outlast is so good that its hard to know where to begin talking about it, but perhaps the most interesting from a gameplay perspective is the camera.  You can think of Outlast as sort of a “found footage” game. Nearly all of the gameplay is viewed through the LCD screen on Miles’ camcorder, complete with the ability to zoom. You don’t need to use the camera, but if you don’t use it you’ll be missing out on a bunch of the game’s lore. The graphics in general are more than adequate–Outlast won’t win any awards, but it does run very smoothly.  The camera’s video quality is a bit spotty, giving the entire game a grainy, overexposed look that is more disquieting than you’d think at first glance.   However, as good as Outlast looks in the safety of the lights, it’s in darkness that Outlast leaves its mark.

The dark in Outlast is absolute–a sheet of impenetrable blackness that can only be navigated with the aid of Miles’ IR-equipped camcorder.  Flip on the IR with the press of a button and you can see the monsters waiting for you.  With IR camera on, everything has an otherworldly greenish glow.  Unfortunately, the IR light doesn’t show much peripheral vision, and the bulb can only reach a few feet, leaving you completely blind to what isn’t directly in front of you.  What’s worse: the IR bulb absolutely eats through the AA batteries you give it.  Run out of power, and you’ll find yourself almost–but not quite–blind. The myopic view and the ever-present worry over battery life generate enough tension to take your breath away.  I really can’t explain how stressful it is to enter an open room, where the floor and walls disappear into darkness only a few feet in any direction.  The camera gimmick by itself is nearly enough to make Outlast worthwhile.[singlepic id=15810 w=320 h=240 float=right]

The audio only improves the experience. The asylum is full of the screeches of imprisoned patients and victims. Monsters snarl and mumble as they shamble around.  If they get too close, you’ll hear blood rushing through your hears and begin to wonder if the quivering breathing you hear is coming from you, from the game, or both.   The soundtrack is nearly perfect, as well.  Sure, it comes in to highlight a set piece or an important story hook liked you’d expect, but you’ll also find yourself wandering a ward with no music at all–nothing but the sound of your breathing, the floor creaking, and the shrieking of the inmates in the distance. The music comes in to dramatic effect–highlighting a particularly important storyline beat or driving you on during one of Outlast many chase sequences.

It’s not going to surprise anybody to learn that Outlast draws a lot from Frictional Games’ classic Amnesia: The Dark Descent.  In both Amnesia and Outlast, the player finds themselves nearly powerless to fight their attackers.  However, where Amnesia encourages players to hide, Outlast forces you to run.  Some of the most intense moments you’ll find are while you’re desperately searching for an air vent or crawl-space you can use to escape the huge man pelting after you.  If you’ve ever played the chase sequence in Call of Chtulu: Dark Corners of the Earth, you know the feeling I mean.  Generally, these sequences are exquisite–the developers put subtle clues in each running sequence so you know where you’re intended to go without having to stop and take stock of each room.  It really helps these chase sequences maintain their breakneck pacing.

[singlepic id=15808 w=320 h=240 float=left]Red Barrels really made the setting work for them. The ramshackle, run-down asylum looks spectacularly creepy, especially when it’s depicted in the washed-out light of the IR camera.  The confined hallways and ward rooms add a lot to keep you guessing where the next monster will pop out from, while providing enough variety in level and geography that you don’t get too bored.  Over the course of the 6-hour runtime, you’ll venture through corporate offices, medical wards, prison cells, and a sewer.  Because there’s always a sewer level.

From a story perspective, Outlast is merely adequate.  The central mystery–drawing equal parts F.E.A.R., REC, and One Flew Over the Cookoo’s Nest–is engaging enough to keep the player interested but hardly anything groundbreaking.  Big Bad Incorporated commits atrocities on mentally-ill asylum patients, things go wrong, you’re caught in the middle. The last hour or so gets a bit more mystical, with a strange turn toward the supernatural towards the end.  It all seems somewhat tacked on, though it does offer a nice change of scenery.

If the plot isn’t particularly incredible, there are still sequences of such brutality that I was genuinely disquieted.  Outlast does not pull its punches–there are moments in this game that people will be talking about for a while. I’d love to tell you more, but to say too much about it would ruin the surprise.  Just trust me on this one: if you think you’re going to play Outlast do not watch any Let’s Play’s until after you have beaten it.   You will regret seeing these moments in the safety of daylight.[singlepic id=15806 w=320 h=240 float=right]

Really, any review of a horror game can be summed up in a three word interrogative: “Is it scary?”  You better believe it is.  Outlast is the scariest game/movie/book I’ve consumed since Amnesia: The Dark Descent. What’s most amazing is that very few of the scares felt cheap, or unearned.  Red Barrels have done a fantastic job combining an intensely disquieting setting, a unique visual look, and an incredibly effective camera gimmick to ensure that nobody escapes Mount Massive without a few nightmares.