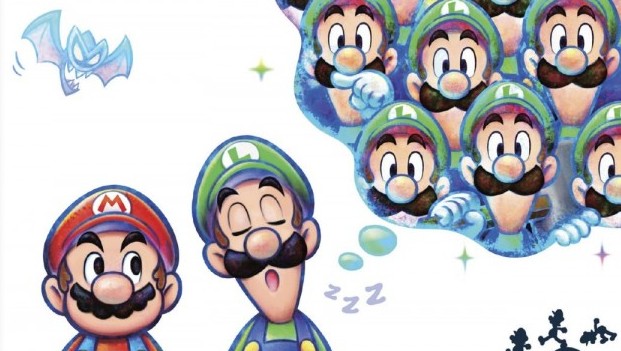 What is the sweet spot for a game’s length? At what point does a game go from being entertaining to a downright slog through battle after battle, just to reach the game’s end? Some games last a couple hours, wrapping up before they overstay their welcome. Others can last for hundreds of hours (or more) before the mere thought enters your head.

Mario & Luigi: Dream Team hits that limit at around the 18 hour mark. It then decides to keep going for another 15.

[singlepic id=14992 w=320 h=240 float=left]The fourth in a series of turn-based RPGs from acclaimed developer AlphaDream, Mario & Luigi: Dream Team comes from a lineage of games inspired by classics like Paper Mario and Super Mario RPG. In this iteration, the brothers Mario are looking for some vacation time, and have received an invite to Pi’illo Island, a tropical paradise in the middle of the ocean. It’s home to a huge assortment of characters, not the least of which being the Pi’illos themselves, guardians of the dream world. It’s not long after Mario and company land on the island that a long dormant evil known as Antasma awakens and wreaks all sorts of family-friendly havoc on the island and its inhabitants. Once again, it’s up to Mario and Luigi to travel the island and navigate not only the real world, but the dream world as well, and save the day.

I’ve mentioned all of this to you in one brief paragraph, and honestly, that’s about the depth of the story you’ll get. But Mario & Luigi insists on drawing out every single interaction with reams of unnecessary dialog. Yes, the characters are colorful and charming (especially the twin bodybuilders who constantly infuse the word “beef” into their lexicon), and while the writing is never as good as it was in the first Mario & Luigi game, it’s got more than a few chuckle-worthy moments. Unfortunately, the charm wears thin about half-way through Mario and Luigi’s adventure, and this is largely the fault of Dream Team’s plodding pace.

In order to save the island from Antasma, you’ll run around its various locations (sunny beaches, mountain peaks, sandy deserts, etc.) in an isometric 2D view. In each of these locations in the “real world”, you’ll enter turn-based battles, solve puzzles, interact with the island’s denizens — typical Mario & Luigi fare. You’ll also find certain areas that must be altered in the “dream world” (accessed through Luigi’s dreams) in order to progress. In the “dream world,” the game turns into a sidescroller, and Mario (with “Dreamy” Luigi in tow) must hop, skip, and jump around to make it to the end of these areas, accomplish what he needs to do, then exit and reap the rewards of his mental romp through dreamspace.

[singlepic id=14993 w=320 h=240 float=right]But Mario & Luigi relies on this back-and-forth from real world to dream world far too often, resulting in a game that often feels padded. For example, one instance requires you to find the bodybuilder’s brother to progress. Once you find him in the real world (after spending about twenty minutes solving puzzles to do so), you have to enter his dreams to wake him up. This turns into an absurdly long quest that forces you to fight four separate boss fights just to progress the story. This sort of thing happens numerous times throughout Mario and Luigi’s journey, and it quickly turns a unique and inventive adventure into one that feels less like a game and more like a chore.

That’s unfortunate, because the base of Mario & Luigi: Dream Team is incredibly solid. The turn-based battle mechanics are varied and interesting as they continue to expand on the interactive gameplay of its predecessors. Part RPG, part rhythm game, each fight is a precarious balance of pattern recognition and exploitation. Every single enemy has a specific “tell” that, when recognized, can be responded to with accurate button presses. An enemy that points at Mario before he rushes in, for example, can be read as a potential attack on the crimson-clad plumber, and Mario can jump before the enemy hits him and follow up with a counterattack. Each attack and counter requires different timing to pull off, and there are numerous special attacks you’ll earn throughout the game, each one essentially its own rhythm-based minigame.

This vast variety ensures battles never turn into a button-mashing affair, and as long as you’ve got the memorization and reflexes to respond, you can leave most battle encounters completely unscathed. Plus, with few exceptions, there are almost no palette swapped enemies, meaning that almost all encounters from one location to another will be unique to that area.

[singlepic id=14994 w=320 h=240 float=left]Even the dream world offers its own unique challenges. As “Dreamy” Luigi is an imaginary manifestation, he can manipulate the dream world in numerous ways. He can transform into palm trees, and by manipulating his mustache on the bottom screen, you can grab Mario with a branch and send him flying. Or, he’ll become a swirling cloud, and by tickling his nose, you’ll cause him to sneeze, pushing background objects into the fore. Or, he’ll multiply into a tower of a hundred Luigis, hoisting Mario high in the sky. You’ll constantly learn new “Luiginary” abilities that allow you to interact with the dream world in new and exciting ways.

Though, nothing beats the “kaiju” Luigi battles you’ll find. These moments are few and far between, but they’ll force you to turn your 3DS on the side like a book and square off against skyscraper-sized bosses, attacking and dodging with swipes of the touch screen. These controls can be imprecise and frustrating, but the spectacle of these fights wins out over any slight quibbles I had with them.

The overall quality and ingenuity of Mario & Luigi: Dream Team is fascinating — and that’s what makes it all the more disappointing. Had about ten hours or so been edited from the game, with the large padded sections shortened or removed entirely, Dream Team’s pacing would have been improved considerably. Instead, you’ll revisit the same locations multiple times and hop back and forth between the dream world and the real over, and over, and over again, turning a game that was once fun into an exercise in tedium. Mario & Luigi: Dream Team could have been one of the best RPGs on the 3DS; instead, it sadly overstays its welcome.