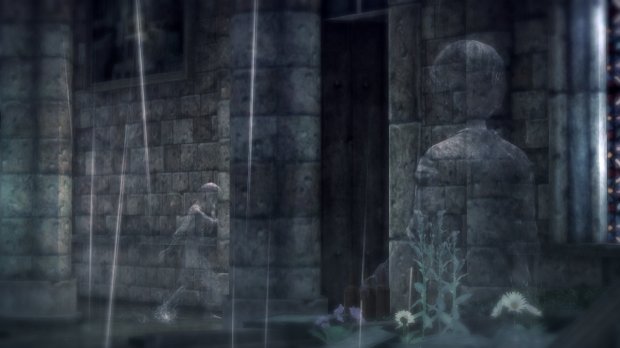 A boy emerges from sleep in a bright, painted world. He climbs from his bed to gaze out the window when the rain begins. His eyes meet those of the rain-soaked silhouette of a young girl, who then turns to run away from a shadowy, hulking monster in pursuit. Drawn to the girl, the boy gives chase with the hope of helping her. As the girl and the monster disappear into a bright doorway, the boy follows close behind. Emerging on the other side, he now finds himself in a dull, lifeless version of the same town – where he, too, is a rain-soaked silhouette.

In Rain, you take control of this curious boy. The fairly esoteric story does not provide much clarification on why he insists on helping the girl, but the captivating visuals and wonderful soundtrack are sure to distract. Characters – player and NPC alike – are invisible in this game, only evidenced by their outline in the pouring rain, or their wet footsteps in dry areas. Story points are spelled out organically in the setting itself. Accordion, piano, and strings beautifully serenade the entire experience.

Unfortunately, there aren’t many more factors left to encourage you to continue forward. Rain counts on its unique aesthetic to carry it through an otherwise-average gameplay experience.

Rain is a stealth game of sorts. As you attempt to make your way through the picturesque city with no offensive ability at your disposal, your primary objective is to avoid being noticed. When standing in the rain, your outlined location is clearly visible to the animal-like enemies in your way. Venture too close to one and it will make quick work of you. However, walk into a covered area where the rain does not reach and you become invisible and (generally) safe.

Traveling through the game’s world is a matter of simple puzzle-solving. There’s always an intended route to walk to avoid being seen and occasionally an object to move into position, granting access to a new area. You may be tasked with alerting an enemy to your presence with the intent of distracting them or causing them to destroy a roadblock. Regardless of the situation, the puzzles are typically quite easy to figure out – none are liable to stump you.

Only one way will lead to success

[singlepic id=16426 w=320 h=240 float=left]The behavior of enemies is rather inconsistent, though. In most cases, they can be chasing you down an alley until they lose sight of you, at which point they’ll suddenly stop – even if you chose an obvious dead-end as your hiding place directly in front of them. But other times, unless you take the game’s intended path, the enemies will follow through and attack you even when you are invisible. It restricts your progress into a linear path where only one way will lead to success – a clear no-no for a stealth game.

In another immersion-breaker, your character can become dirty so that he is visible even when not under rainfall, but the rain will not wash him off when back under it. No matter how hard it is pouring outside, you instead must locate a source of still water like a basin to wash in. And strangely, this “dirty” mechanic never seems to be put to effective use in puzzle-solving situations.

Moreover, the game’s fixed camera serves as a double-edged sword. The governed points-of-view will pan to some remarkable displays of the dark and dreary city, but will also provide some odd perspectives that make navigating some areas a chore. It does provide for a pleasing cinematic feel, but at the expense of gameplay.

[singlepic id=16427 w=320 h=240 float=right]Still, the scenic landscapes and exquisite soundtrack serve to encourage forgiveness of Rain’s functional missteps. Meeting up with the elusive girl results in some Ico-like sequences – you’ll perform tasks to allow her to continue and she’ll return the favor later. And dealing with a particularly persistent major enemy over the final couple of chapters will hold your attention, even if it gets a bit repetitive – an unfortunate aspect of a game that took me less than five hours to complete.

Impressive art style and soundtrack make up for gameplay let-downs

The experience of playing Rain felt like it should have culminated in an emotional and poignant ending, but the abstruse storytelling only acted as a roadblock to a sought-after moment of epiphany – it borders on pretentiousness. But where the narrative and gameplay are let-downs, the impressive art style and outstanding soundtrack are a treat for the senses. As long as you don’t expect to be soaked in a monsoon of wonderment, playing in Rain can be a worthwhile experience.

Rain was reviewed using a pre-release code provided by the publisher.