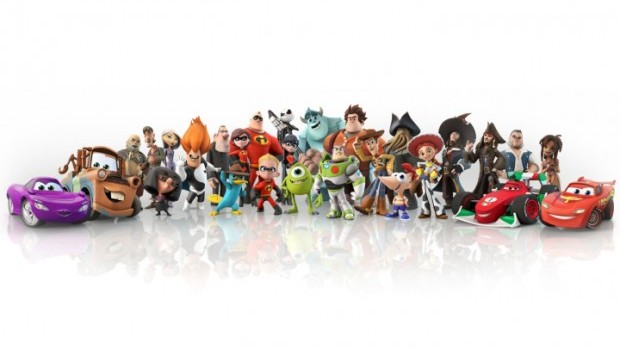 As a parent, a gamer, a Disney fan, and a collector, Disney Infinity is basically my wallet’s worst nightmare.

The idea of taking the entire wealth of iconic Disney characters and worlds, throwing them all into a melting pot and seeing what stories you can create has enticed me since the day Disney Infinity was announced. Add on top of that the concept of collecting high-quality figures and using them to interact with the game and you’ve basically come up with a license to print money.

The thing is, if you’re going to require people to fork over ten dollars for each character, you better have a very compelling reason to do so. Disney Infinity still hasn’t quite figured that out yet — and honestly, that’s the least of its problems.

Disney Infinity is the latest entry to the physical toy-based action game market, previously dominated by kid-friendly Diablo-ish clone Skylanders. Much like Skylanders, you’ll spend three-quarters of a c-note for a starter pack that includes the game, a couple action figures and a base that plugs into your console of choice. Put the figures on the base and — presto! — your character has, through the magic of near-field communication, appeared within the game itself. You can switch characters at any time to tackle the various puzzles and scenarios, and you can even take your figures to your friend’s house, with all of your stats carrying over intact. It’s a really impressive feat — the kind of thing that they tried to come up with in the 1980s, except now it actually works.

[singlepic id=15287 w=320 h=240 float=left]There is a catch, however, and it’s a doozy: you can only do so much within the game with only the starter set of characters. In order to unlock the entire game, you’ll need to purchase a ton of additional figures at around ten to fifteen bucks a pop. It’s essentially glorified DLC, and it can quickly turn a $75 game into a three-hundred dollar investment. You’ll constantly fight a battle of wills between your child’s (or, let’s face it, your own) desire to unlock everything in the game and your own ability to reason. It smacks of money-grubbing, and it absolutely is. But the figures are generally high quality, and it’s really cool seeing the digital representation of the physical figure manifest in the game.

To be fair, Disney Infinity packs a ton of game within its starter pack. You’ll get Jack Sparrow from Pirates of the Caribbean, Sully from Monsters University, and Mr. Incredible from The Incredibles with your initial purchase. Along with these characters is a physical “unlock” for each of their respective adventures. Dubbed “Playsets” by Disney Infinity, these are multi-hour-long quests where the basic running/jumping/interaction mechanics are similar but all feature some unique hook that separates them from the others. For example, the Incredibles Playset will have you building up your own base, running around a decent sized city, and saving  its residents from various the nefarious Syndrome. Or you can try to out-prank Fear Tech with paintball guns and bicycle tricks in the Monsters University Playset. If you want something with a bit more exploration, you can fire up the Pirates of the Caribbean Playset, allowing you to sail the seven seas, taking part in ship-to-ship combat and island exploration.

Each of these Playsets will take about three to four hours to complete if you’re just looking to finish the story missions, but there are dozens of side quests, races, and character-specific challenges that will stretch that total out for another five or so hours. That’s where your disposable income will come in — in order to see everything that each of these Playsets have to offer, you’ll have to shell out extra money to buy additional figures to access most of the extra modes and unlocks.

This wouldn’t be so egregious if the characters were actually unique in any meaningful way. Characters from the various Playsets all control differently (driving around as Mater is a vastly distinctive experience from scaring people as Mike Wazowski, for instance), but save for The Incredibles, each character from a single property is essentially a carbon copy of the other ones. Jack Sparrow has the same exact actions and moves available to him as Captain Barbossa or Davy Jones; the same goes for the figures from Monsters University. The Incredibles all have unique super powers that match up their on-screen persona, but that’s where the individuality ends. All characters have the same chance of defeating their enemies as everyone else, and the only reasons for buying the other figures come from your desire to find and unlock everything, or to attack Infinity’s challenges with two players.

[singlepic id=15286 w=320 h=240 float=right]Exacerbating the issue is a completely lackluster leveling system. As you complete objectives and defeat enemies, you’ll gain experience that will grant you levels, with each figure level capped at fifteen. However, leveling doesn’t do anything, apart from giving you an extra spin in the Vault — a roulette wheel of items for use in the completely separate Toy Box mode. You’ll find additional items and can purchase stronger weaponry in some of the Playsets, but the only way to add additional power to your character is by purchasing blind packs of Power Discs in random bags of two for $4.99 each. These discs add upgrades to your character like additional defense or power — and once again, they aren’t character specific. These tokens are placed underneath the physical figure and are interchangeable with any of the figures in the Infinity franchise. They’ve taken things that should have been part of each character’s individual progression and instead have not only monetized them, but randomized them.

You don’t really need them, though, because Infinity isn’t difficult in the slightest. Losing your health doesn’t do anything other than place you right back where you were, with the only punishment being a few seconds of lost time. Also, many missions are simple fetch or kill quests, with the occasional interesting or unique mission to spice things up. The quests are generally fun and entertaining, albeit safe and conventional — just exciting enough for children to get wrapped up in the pleasant Disney worlds, but long-time gamers will be hard-pressed to find something they haven’t done better elsewhere.

While the individual Playsets offer family-friendly Disney-themed thrills, the Toy Box is ostensibly the heart of the entire Infinity package — where Skylanders meets Little Big Planet. This is where you can mash up everything into a blender and see what turns up. Want to make an Alice in Wonderland themed platforming level with Scrooge McDuck’s money bin looming in the background? Go ahead. How about a racetrack where Lightning McQueen competes against Jack Sparrow on a Tron-themed track? You can build that too. Bits and pieces of the Toy Box are doled out slowly as you find toy capsules in each of the Playsets, as well as from the aforementioned Vault or Power Discs, meaning that it’ll take more than a few hours before the true potential of the Toy Box is opened up to you. However, navigating its toolset is anything but intuitive. You either wander aimlessly through a series of layered menus that don’t really link logically with one another, or you can walk around with a magic wand, firing it at things that you want to move around. Either way isn’t quite perfect, meaning that level creation will likely take a little bit longer than you’d like. There are a couple tutorials available that help, but don’t go nearly into the kind of depth that Infinity’s creation suite requires. Luckily, there are a few Disney created levels available online at the outset, letting you see the kind of possibilities available to you once you overcome its clumsy interface.

[singlepic id=15288 w=320 h=240 float=left]In fact, clumsy is really the best way to describe Disney Infinity as a whole. Equipping gadgets or abilities for each character never feels natural, even after a dozen hours. Driving and platforming feels too squirrely, constantly leading to miscalculated jumps and unfortunate crashes. And heaven forbid you try to pilot The Incredibles’ helicopter for more than a few minutes, lest you start throwing your controller in a fit of rage.

Infinity is also riddled with bugs. Spoken dialog will repeat mid-sentence, cutscenes will start randomly and without warning (often incorrectly framing your character in the shot), textures bug out, the frame rate constantly dips into the teens, and the game even locked up on me entirely. Whether this speaks to Avalanche biting off way more than they could chew or the limitations of current hardware, I can’t really say either way. The likely problem is that Infinity tries to do so much, but can’t seem to really nail any of it properly.

And yet, as I’m writing this review the night before Infinity launches, I’m thinking about how I can’t wait to wake up in the morning and rush to the store to grab the rest of the figures to round out my collection. I can’t wait to fire up the Cars Playset to see how its world distinguishes itself from the others — and I don’t even like Cars. I haven’t even had a chance to check The Lone Ranger yet (both of these Playsets are sold separately and don’t factor into this review). Yes, they’re pretty pricey at around $35-$40 (depending on where you go), but you’re getting a decently sized adventure that’s going to feel wildly different from the other Playsets — though I’m not counting on the individual characters varying much.

What Disney Infinity ultimately represents is the potential of a fantastic platform. It’s incredibly rough around the edges, and it will make your wallet beg for mercy, but there is a massive wealth of content for Disney to cull from. And as buggy and unintuitive as the game can be at times, I’m still intrigued enough to see this one through. With the likes of Toy Story and Wreck-it Ralph coming soon, plus at least four more years of additional content on the way, Disney Infinity truly feels like the first initiative of a much larger plan. Here’s to hoping that future additions to the franchise are a bit more polished, because I really want an excuse to buy more of those blasted figures.