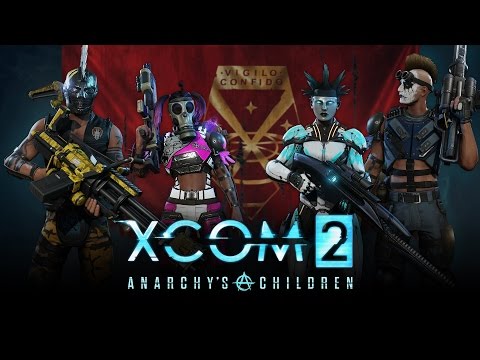 Typically when I review a game I play it on normal difficulty, and with no mods — as the developers intended it to be for the vast majority of players. I tackled my review of XCOM 2 in this way, soaking up the dark and ominous tone the storyline delivers. This first expansion, Anarchy’s Children, is a little off of that established center.

The team at Firaxis have announced three expansion packs as part of their “Resistance Pack” — Anarchy’s Children, Alien Hunters, and Shen’s Last Gift. This first is entirely cosmetic, Alien Hunters will introduce a new hunting mechanic to the game, and Shen’s Last Gift offers up a new soldier class, upgrades, and more narrative-driven structures. While we’ll have to wait until this summer to check out the latter two, I got to check out Anarchy’s Children this weekend.

Anarchy’s Children offers up nearly 100 cosmetic customizations for your XCOM soldiers. Depending on when you install this pack, you may see all 100 permutations available, or you may only see a few. Over the course of the game you’ll see your armor evolve from scrap Army remnants to well-researched alien hybrid technologies. If you install Anarchy’s Children and start a new game from the beginning, you’ll see chunky mismatched armor pieces, which will give way to more sleek and cohesive armors. The final permutations look absolutely amazing and are tonally consistent with the expected dark and dangerous mythos.

The Anarchy’s Children feels very much like the punk rock version of XCOM 2, but it does solve the largest gap I felt in the far-improved soldier system — squad customization. Want to build a Kabuki-painted soldier dressed not unlike Robocop, but sporting an odd Voodoo hat? Done. If your Rangers would look better with flamboyant pink rivulets of stringy pigtailed hair and a gas mask, that’s available too. It’s all a little outlandish, and frankly stumbles into the realm of the bizarre at times, but my black-clad sniper with the steel horned face mask might just send some terror into these damnable foes.

Coupled with this expansion is the first major patch for XCOM 2 and comes with a great many improvements. You can check out the full patch notes here, but the Zip Mode (skips many of the little animations that I liked so much in my review), the ability to force-load saves when a mod is incompatible or no longer present, and fixing a whole host of bugs feels like icing on the cake.

Anarchy’s Children pops in at $4.99 (or is free if you picked up the Reinforcement Pack) and adds a lot of goodies. There are a lot of cosmetic expansions available for free on the Steam Workshop, but these scratch my Suicide Squad itch pretty nicely.

Rather than taking my word for it, check out this video below for a look at my new Terror Patrol.