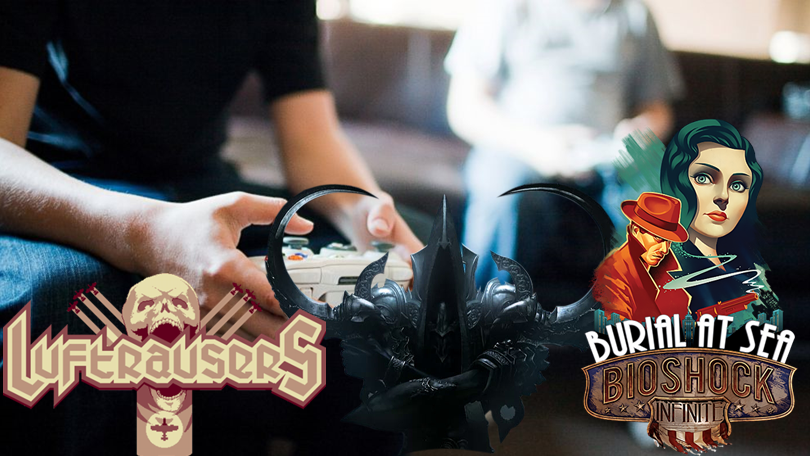 Much of the world associates March Madness with college basketball, but after 2014, gamers will most likely look at March Madness as the month that brought a myriad of impressive AAA and indie titles. This incredibly month of gaming closes out with a tasteful variety of games like Luftrausers, Diablo III: Reaper of Souls, and Bioshock Infinite – Burial At Sea Episode Two. There are plenty of games to keep us gaming up until E3 in June. Here is what Gaming Trend is playing.

I was not planning on buying Reaper of Souls. In fact, I was thinking of skipping it entirely. I have so many other games to play – I’ve only completed one half of the Titanfall campaign and am sitting at a paltry level 12 with less than three dozen matches under my belt, and Garden Warfare has gone entirely unplayed. Did that stop me? HA! I’ve been familiarizing myself with Diablo III again and will likely sink far too much time this weekend as I work my way through Act V.

I’m a little sad that I’ve finished Strider, (94.8% complete), and that Sony put the PS4 at $450 CAD – right now the Xbox One Titanfall edition is the exact same price here in Canada. I want to play Second Son, but it’s just going to have to wait. Since both Tomb Raider : Definitive Edition and Thief are on sale for $30 each from Friday through to Sunday on Xbox Live, I may just have to pick those up instead. Lastly, I picked up the final two Skylanders Swap Force characters as they were just released (Shadow Trap , Freeze Blade). If my son is up for it, I can see a little time in the Cloudbreak Islands.

I picked up Final Fantasy X/X-2 HD Remastered on the Vita last week, and I’ve been slowly chugging my way through it. It’s been forever since I’ve played them both, and it’s pretty amazing that they’re about as good as I remembered. The voice acting was always kind of bad (though I totally forgot that Wakka was voiced by the guy who plays Bender from Futurama), but the game itself is really good. I haven’t touched X-2 at all yet, and I don’t plan on it until I wring out everything I can from X. We’ll see if I can’t get Platinum Trophies for both of these games by the end of the year.

I also picked up Diablo III a bit in anticipation for Reaper of Souls, and holy crap has that game changed. The last time I played was a month or two after launch, and I hadn’t touched it since, so seeing the new difficulty modes, the shared gold, the lack of auction house, and the new loot system all in one fell swoop was very intimidating. I had a level 53 Demon Hunter, but I decided to start over with a Crusader since it’s been so long. I don’t know what they did, but the game just feels more… entertaining now. Not that it was ever bad, but it really feels like you’re an unstoppable bad-ass now. I hope to put some more time into it — if I can find the time, that is.

So…I’m gonna confess that I’ve never played a Pokemon title.  Ever.  Well, thanks to Nintendo I snapped up Pokemon X for free and I’ve been picking away at it.  I’m not seeing the shared insanity others seem to have with the game, but it’s a fun little distraction.  I’ve also been playing a lot of Rocksmith 2014, and Reaper of Souls.  I’ve also got some plans to check out MLB The Show 2014 on PS3 this weekend, with PS4 and Vita hitting on Monday.  I can’t say I’m a huge sports guy, but damn if I didn’t have fun with last year’s title.

I am interested in The Elder Scrolls Online – the early launch stuff starts on Sunday, and I’m patched and ready.   I have enjoyed my brief time in the beta so I’m eager to see what the full deal holds.  I’m going to write my review over the next few weeks to ensure I get a full experience, so don’t expect that review on launch day.  Instead I’ll post up a “Review in progress” which should give you the thumbs up or thumbs down on the launch experience.

This weekend I am looking into another nostalgia trip by dunking my toes back into the waters of Zanarkand with some Final Fantasy X/X-2 HD. I was lukewarm about the release until I found out about the Expert Sphere Grid which removes boundaries and lets you customize character however you like… that’s gotten really excited to see what new way I can get Yuna through her Pilgrimage.

Besides that, I am thinking about maybe seeing what the world of The Witcher is like, since the excitement of Witcher 3 continues to grow and it’s a franchise I never picked up. (If I wind up loving it I will owe my sister a HUGE apology. She’s been telling me to play it for years… Family of gamers we are.) In between it all, maybe I’ll head over to the theater and get myself a laugh at the new Need For Speed movie…

What are you playing this weekend?