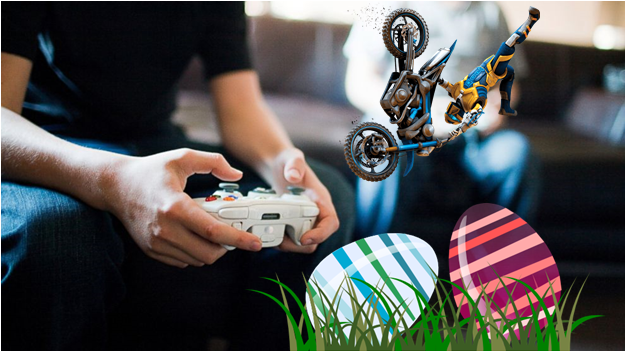 Whether you’re hiding eggs for Easter, savoring the seder for Passover or just enjoying a beautiful spring weekend, one thing is for sure–we all will be playing video games. Here’s what the GT staffers are playing:

I started playing Trials: Fusion during the week and was having a good time with it. The concept is pretty simple; you go up the hill … shit, hold on I crashed … okay, you go up the … what the hell, I climbed the damn tire. Alright, you go up …YOU KNOW WHAT, SCREW THIS GAME, I’m going to go play more Peggle 2.

The current Grim Dawn build is occupying my time lately, and so far the whole game seems like a very solid take on the dungeon-crawling, loot-grabbing genre. The world feels dark – it has that kind of Diablo-ish somberness to it where humanity only exists by a combination of sheer will and luck, while at the same time managing to give itself a distinct feel and environment.

The Diablo comparisons are going to be inevitable with a game like this, but so far the best way to sum it up is ‘Diablo’s mood, with more of a Torchlight II skill system’. Good fun, and I look forward to seeing how it developers over time.

This weekend has already started, here with our favorite stat holiday known as Good Friday which hops around year-to-year. I’m currently at work however, with no end in sight. That said, I’m sure I’ll sneak some gaming time in. There are a few GT projects I’m working on so I have commitments to meet before I kick back and wiggle thumbs with games on my own personal agenda.

I`ve almost completed my run-through on hard with what started out as a level 30 monk in Diablo III (plus expansion). I`m currently level 65 and rubbing elbows with the denizens of Pandemonium, so hopefully that will wrap up soon as I want to fool around in Adventure mode. I`m tempted to pick up Trials Fusion for both the Xbox One and 360 (aka my son`s MineCraft machine).

I have been enjoying the heck out of Tomb Raider: Definitive Edition on the Xbox One, and I have barely started Thief. Beside Tomb Raider though, it fails to steal my attention. With the bunny showing up and family commitments plus work, plus finding enough space in my current gaming area to actually play some of the events in Kinect Sports Rivals, I might just have to leave all that aside.

This Easter I’m hooked on Metal Gear Solid V: Ground Zeroes. There’s way more going on in this unassuming little title than I first gave it credit for. Sure you can beat the main mission in 20 minutes, if you really want to, but why do that when it’s so much more fun to go off mission and explore? The enemy A.I. is super sharp, especially in hard mode, which makes messing with the guards all the more engaging. Some of my favorite pastimes include knocking out enemies and rigging their bodies with landmines, taking joyrides in tanks, Sniping from guard towers, and clearing out the anti-air guns to pave the way for a massive helicopter strike. The bonus missions are also loads of fun (especially the one with the secret cameo), this weekend I’m going to try and unlock the top-secret mission. I just need to focus and stop messing with the guards so much.

I’m juggling a lot for this Easter.  I’m working on a review for NES Remix 2, working through an early version of a game I can’t mention, and doing a preview with my hands-on time with Watch Dogs.  We’ll have not one, not two, but three interviews with the team to show you soon as well.  Somebody has to edit all that, and…uh…that’s me!   I’m also working on some art books that were running a little late.   So….work.   I’m also gonna find some time to practice guitar in there I’m sure – Rocksmith 2014 continues to be a staple in my household.  Somewhere in here I also need to take my wife to the Musical Instrument Museum.  Not exactly sure where I’m gonna find the time for all that…