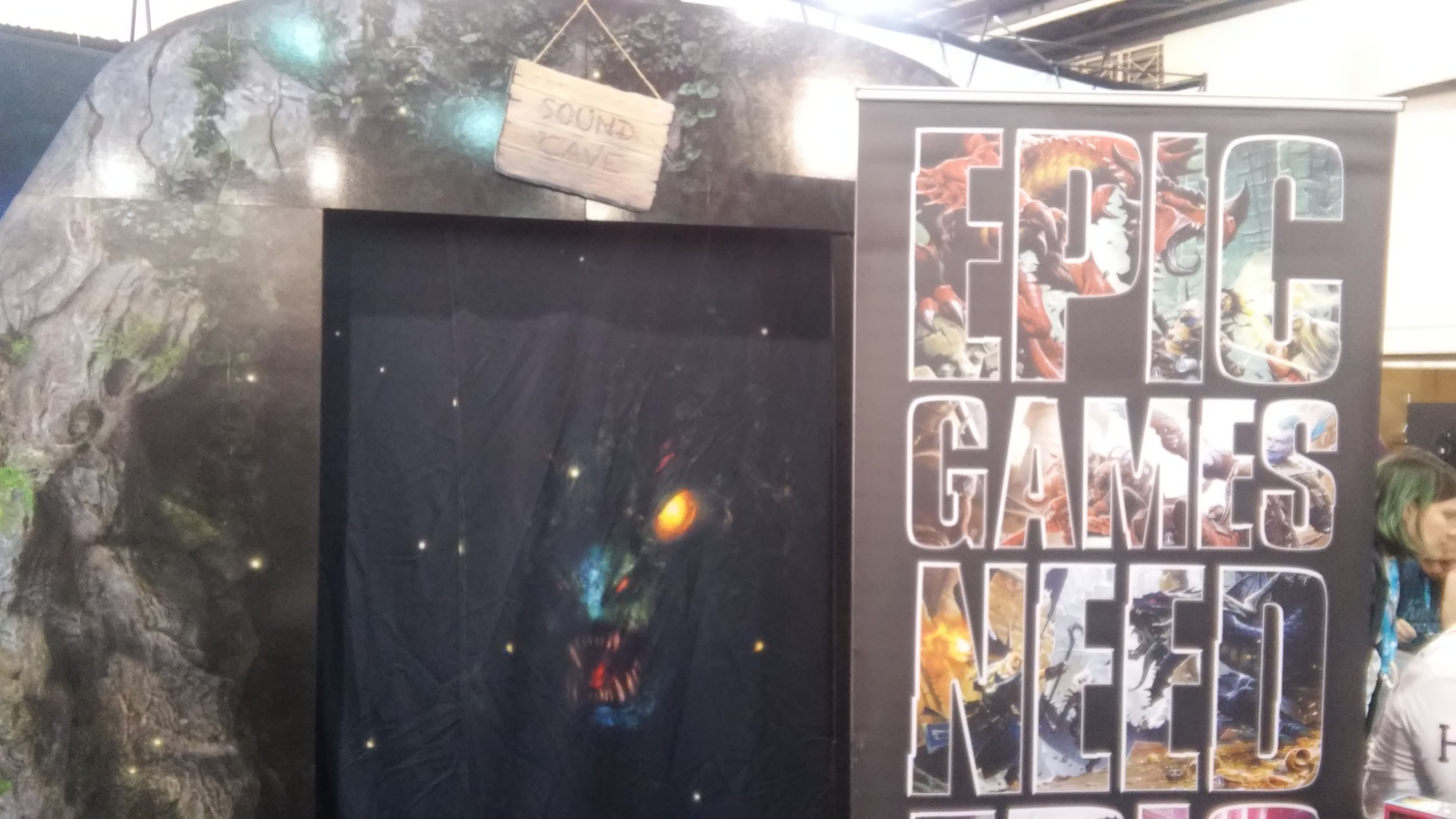 Nothing helps set the mood in an RPG like the right accompanying music. If you have never added background music to one of your games, I highly encourage you to do so, and if you don’t know where to start, you can look to Syrinscape. Syrinscape’s software is a multilayered tool to add music and sound sets to your game. I spoke to Syrinscape’s Steve Barr, but only after becoming part of a cosmic horror myself: the booth contained a small recording studio which was collecting thousands of voices to amalgamate into a single cosmic horror for an upcoming mythos adventure. If you play it and hear a horrific, distorted recitation of Dickens, you will have found my contribution.

At its most basic, Syinscape has premade sound sets for specific moods or areas, such as a bustling city street or that same city undergoing the roars and crackling of a dragon attack. However, it also contains tools to create your own sound sets, which you can store and use at your leisure. If you want, for instance, a forest at night, you can add the sounds of light rainfall, wind, crickets, and light music to create the mood you want. Sound sets also have specific sound cues that you can use at appropriate moments, which you can also pull for your own sets. For instance, during the aforementioned dragon attack, the game master can trigger the sound of a plume of fire being belched from the swooping dragon, magic spells being hurled by the wizard, and claws raking armor as it terrorizes the city.

Syrinscape’s software is free to start, granting players two free sound sets. Afterwards you can purchase individual sets, get monthly subscriptions for unlimited, fantasy or science fiction sets, or a subscription for the full audio. Syrinscape does not use DRM, so you can download and manipulate software at will once you make your purchase.

While Syrinscape does exist in the space of other tools that don’t charge a subscription, it is working to set itself apart with unique features and partnerships. Syrinscape is working with board game companies to create specific sound sets and RPG companies to tailor sets to specific locations and battles in your adventures. Paizo has a set ready to go for its Starfinder adventures, getting you ready for Abbadon Station with tailor-made sounds for the experience. Syrinscape works directly with these companies, making the sound sets together and sometimes recording employee voices for NPCs that you will encounter.

Technological integration is another major focus of Syrinscape, and one that is still developing. The software already fits into Realmworks, Herolab, and D20 pro, but they are beta testing a new minion and master system to help with Roll20, Skype, or Discord games. Under this system, you could bypass other voice software by playing sounds directly from the GM’s computer directly onto the player’s.

More content is developing all the time, including Green Ronin’s Mutants and Masterminds, continuing work with Critical Role, and science fiction content. Next up with Paizo is the Strange Aeons adventure path, and for more info on any of these you can check out Syrinscape directly or stay tuned to Gaming Trend for developing coverage.