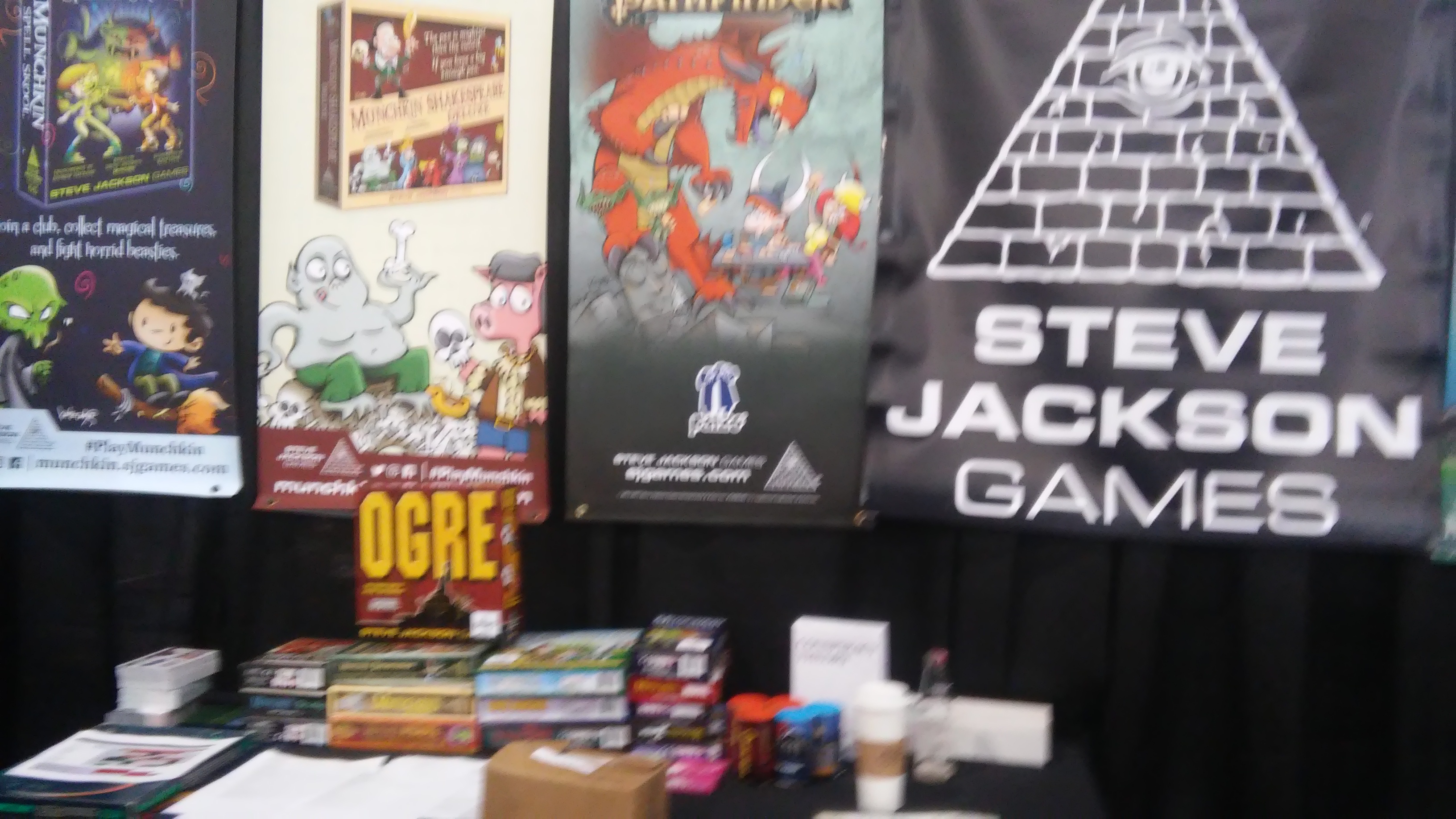 Steve Jackson had a lot on offer at PAX Unplugged, not the least of which were expansions to its Munchkin game line. Shakespearian and Starfinder inspired adaptations are in the works, and even as a fan of puns I was struggling just to make it through the Shakespeare deck without audible groans. Those of you who are fans of the Munchkin comic will be excited to see Munchkin: Magical Mess, an adaptation of that work into the card game that inspired it. (Insert Inception noise here.)

I also had some time to demo the upcoming Munchkin Collectable Card Game, which melds traditional card combat with bluffing mechanics and humor to tailor the experience to the Munchkin experience. The game is based around a familiar enough concept: you and another warrior are facing off, throwing monsters at one another and using magical abilities to undermine one another. The truly special feature is that attacks take place with cards face down. When someone sends a card at you, you never know how much damage you might be taking. You know how much it costs to use for your opponent, which only gives you a guess as to how much power you have to handle.

You can run away from one attack for free, or more by taking two damage each time, or you can choose to block. Equipment deals damage back to the attacker but only prevents some of the incoming damage, but allies will block all damage, regardless of their toughness, and tend to have lower attack abilities. Most interesting is that an attack might not be a monster at all. You can attack with anything in the hopes that you will be drawing out your opponent’s defenses and wasting them for the time when you rally for a proper attack. This tactic is risky, however; if your opponent calls out a fake attack, you will take damage and lose the card you feinted with. This creates a dynamic of constantly second guessing your opponent, carefully managing your resources to keep yourself alive.

As prolific as it is to Steve Jackson Games, Munchkin only makes up part of its repertoire. GURPS Dungeon Fantasy’s box set was recently Kickstarted, a comprehensive re-release of its universal RPG for those looking to customize their dungeon adventures with gritty, granular rules. Triplanetary and Ogre Tactics will also be seeing re-release soon, returning Steve Jackson Games to miniature lines which have long gone without updates.

Those more serious affairs aside, Super Kitty was one of the highlights of the booth. The simple party game is an adaptation of Slapjack, with each card having a kitten on it of varying shape, color, and bug pet. As each gets thrown down, your goal is to capture as many as possible which match one of those features of your card, beating the other players to the punch. Whoever has the most cards at the end is victorious, and likely sporting mild bruises on top of their hands.

I also had some insightful commentary from Rhea Friesen, Steve Jackson’s marketing director about the nature of tabletop sales. The business aspect often takes a backseat to design as far as fans are concerned, but this makes the difference between a successful and unsuccessful product. Anyone looking to sell a game has three key audiences to keep in mind: fans directly, major distributors (such as Target or Walmart) and smaller retailers like your Friendly Local Game Stores. Each of these have different goals and tendencies, leaving a lot of variables to manage. Crowdfunding and market fluctuations make these calculations more complicated. Especially difficult is the seemingly simple question of how many of each game to produce. Licenses, like Starfinder, give you more predictability, but only to a certain degree.

Many of the contacts I made at PAX Unplugged are able to speak to the idiosyncrasies of the tabletop industry, and I will be covering this issue more in depth in the future. For now, Steve Jackson Games has tons more information on these products and more, and I encourage you to check out the site directly.