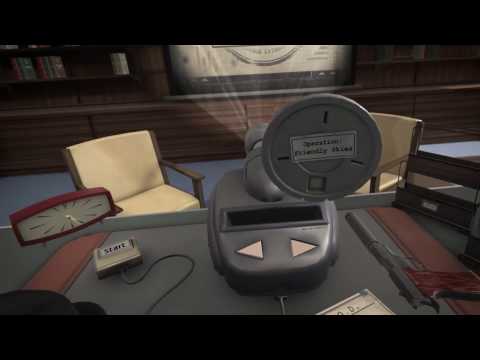 The launch window for the PlayStation VR has been pretty solid, but most of what was available at launch in October could easily be described as tech demos. As the PSVR rounds out its 2016 launch lineup, I was surprised to see such a fantastic game drop in my lap with almost zero fanfare.

If you own a VR kit, I Expect You To Die is an absolute must-have.

The game storyline conjures the campiest parts of the classic James Bond films. The evil Zoraxis Corporation is hell-bent on destroying the world (naturally), and it’s your job to thwart their dastardly deeds using only the grooviest methods. You see, I Expect You To Die (not unlike the excellent FPS, No One Lives Forever) is retro-futuristic 70s camp and it couldn’t fit the motif better.

I Expect You To Die - Launch Trailer

To ensure a nausea-free experience, I Expect You To Die takes place in stationary sitting positions. Your nameless agent starts off in his posh, well-decorated office, checking out film reels of the next mission. Using the PlayStation Move controllers you’ll use “telekinesis” to draw objects to you (unless you can reach them, then you’ll use the trigger and top button to ‘grip’ it) and then you’ll interact with them. This can be lighting a cigar with a nearby lighter and then jamming it in your mouth, using that same lighter to set fire to damned near everything in the room, or loading the next film can into the projector after placing the other one into a nearby film rack. Given how many games stumble at this mechanic, it’s amazing just how well I Expect You To Die does it.

Your missions are the usual ‘save the world’ fare, and you’ll fade into them at the most inopportune moments. The first level has you boarding a Zoraxis plane to steal a high-tech prototype vehicle. Naturally, the plane has taken off, you are trapped in the cargo bay, and poisonous gas is filling the cabin. Your job is to steal the car and drive it out of the plane, utilizing the self-deploying parachute to glide it to safety. It’d be easy if literally everything in the game wasn’t out to kill you. Lasers, poison, grenades, water leaks, and even bears with crossbows will help you fulfill the promise of the game’s title. When you do die (and you will), you’ll restart the mission from the beginning. While this sounds like an issue, the missions don’t take an inordinate amount of time to complete. You’ll likely figure out the puzzles in 15 minutes and then you’ll blaze through in just five minutes. The first mission can be completed in under a minute, and there’s a trophy for doing exactly that.

Yep. Bombs. Just one of the ways you’ll die.

Once you’ve completed a mission you are given a debriefing back at HQ. There are six sub-objectives for each mission for you to discover. These are usually accompanied by some dry British wit when you discover them, which adds some fun and personality. Objects in the environment are equally as tongue-in-cheek as you find books from “Blofeld Industries” and other obvious references. I’d also be remiss if I didn’t mention the Shirley Bassey-esque intro to the game – it sets the tone perfectly and it is very reminiscent of a classic James Bond movie credits scene. The team at Schell Games knew the tone they wanted to hit and absolutely nailed it from start to finish.

Part of the immersive tone in this game comes from the semi-stylized retro-futuristic look. The game looks great in VR, and all of the objects you’ll interact with hold up incredibly well at close inspection. This is important as there are clues to the puzzles squirreled away in the environments. Unlike many other games, here you can read the fine print.

To call I Expect You To Die! a locked room simulator would really be underselling the concept, to say nothing of the fantastic execution. This game has, by a wide margin, the best controls of any PSVR game I’ve played. While the whole game will only take you a few hours to complete, watching your friends struggle with the goofy puzzles make it worth the price of admission at just $24.99 at the time of writing.

I Expect You To Die!

More than just a ‘locked in a room’ simulator, I Expect You To Die! Is a masterful use of VR and the Move controllers. The puzzles are just challenging enough to be fun, while not so easy as to be obvious. My only complaint is that the game is relatively short, but the promise of a sequel has me ready to hand over my money. You need this game in your VR library.

Ron Burke is the Editor in Chief for Gaming Trend. Currently living in Fort Worth, Texas, Ron is an old-school gamer who enjoys CRPGs, action/adventure, platformers, music games, and has recently gotten into tabletop gaming. Ron is also a fourth degree black belt, with a Master's rank in Matsumura Seito Shōrin-ryū, Moo Duk Kwan Tang Soo Do, Universal Tang Soo Do Alliance, and International Tang Soo Do Federation. He also holds ranks in several other styles in his search to be a well-rounded fighter. Ron has been married to Gaming Trend Editor, Laura Burke, for 21 years. They have three dogs - Pazuzu (Irish Terrier), Atë, and Calliope (both Australian Kelpie/Pit Bull mixes).
Related Articles: I Expect You To Die!, VR
Share
Tweet
Share
Submit