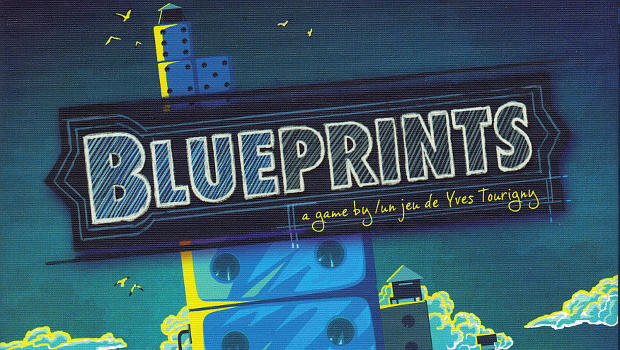 Würfel is the German word for die.

Not die as in “die, you gravy-sucking pig,” but as in dice.

But all things würfel in the gaming world are hot. As in blistering. The number of card games now being translated into dice-based forms keeps growing. Bang! is now Bang! The Dice Game. Bohnanza has a dice version, Würfel Bohnanza. Even Race for the Galaxy is getting diced in what can only be awarded Most Obvious Name: Roll for the Galaxy. And did any gamer’s game sell as many copies for Christmas as the dice-based King of Tokyo?

Then there’s the venerable Yahtzee. When people think dice game, they think Yahtzee. Poor Yahtzee. It seems to have been forgotten in this rush to würfel-ify the gaming world. Then again, how do you squeeze more dice-based goodness out of a game that is nothing but dice?

Which is what Canadian game designer Yves Tourigny (see my review of his outstanding Expedition: Northwest Passage) did with his new dice game from Z-Man Games, Blueprints.

Blueprints takes the world of Yahtzee and attempts to de-Flatland it. Players can’t just think horizontally. Instead, they build 3D structures with their dice roll results, stacking dice colored to represent different building materials (wood, glass, recycled, and stone) and reaching for the sky.

Each of two to four players takes on the role of architect. The goal is to stack dice chosen from a pool to form buildings that win awards and prizes, which scores points. Most points after three rounds wins.

Deal each player one Blueprint card to start a round. The card depicts a building “blueprint” in 2D and isomorphic 3D that the player builds upon using six dice. Players protect their construction from prying eyes with a cardboard shield in their color (red, yellow, green, or blue), which also depicts the scoring for each dice type:

2. Use an increasing number of recycled (green) dice in the construction

3. Place stone (black) dice in a vertical configuration in increasing amounts and on higher floors

4. Display the top-side pips on a glass (clear) die

Select two dice from the bag in differing colors. These “in-demand materials” dice grant a tie-breaker advantage to the player who uses the most. Now form the dice pool  with an initial roll of the randomized dice (8 dice for two players, 9 for three, and 7 for four).

Players select one die from the pool to place on a playable space on the Blueprint card. Both the color and top-side pip number of the rolled dice matter for scoring and cannot be changed during placement. A player can abide by the design on the card and score six points for building to plan, or the plan can be ignored if a player thinks the dice pool options may score more for an altered build (e.g., several available stone dice might favor building a six-floor skyscraper).

One major hitch in construction: Players may place a die on top of another one only if the pip value of the upper die is the same or larger than the die already played under it. (You knew there was a catch, right?)

Replace dice taken from the pool with a matching amount chosen unseen from the dice bag and rolled. Players continue the round until each has six dice played to the Blueprint card. Each player’s building is scored on the scoreboard, totaling the scoring possibilities for each color die’s scoring rules, plus six points for building according to the Blueprint card plan.

Players receive an Award card in gold (three points), silver (two), or bronze (one) for highest scoreboard rank that round, second highest, and third, respectively. Which of these Award medals is used in the game will depend on the number of players. Only one Award card is presented in each medal color; break ties using the in-demand materials dice colors.

Now, award the Prize cards (each worth two points):

1. Skyscraper Prize: building has five or more “floors” of dice

Award only one card of each Prize type per round; break ties with the in-demand materials dice. Players keep Award and Prize cards won face down so other players won’t know their exact point totals.

After players receive Award and Prize cards, reset the scoreboard, dice pool, and in-demand materials dice for a new round. Discard old Blueprint cards, and deal a new Blueprint card to each player.

When three rounds of play conclude, total the point values of all Award and Prize cards. The player with the most points wins.

I.M. Pei would be so proud…

Obviously, Blueprints is a lighter game, but it’s not without its challenges. Mentally juggling the best available dice pool pick can be maddening when considering the various scoring rules and Prize cards.

“Stone is the first in-demand material, but glass in high pip values makes up most of the pool, yet Sandra is going big on recycled, and I may need to stop her, plus I’ve drawn a lot of twos—can I get four of them to win a shot at the Structural Integrity Prize? And what about Naomi?”  Prepare for a bit of brain-burning analysis paralysis. Yahtzee was never this convoluted.

But that’s a good thing. Blueprints is a fine game night change of pace or filler, a game playable before, after, or between heavier games. The MSRP for the game carves out a niche, too, being neither too cheap nor a bank breaker. The box size is much smaller than the typical board game, so it’s more portable. Dice are always fun, and the game uses them in a novel way. By adding color considerations and a 3D play aspect, Blueprints takes the single dimension of Yahtzee and pumps it up to something much more interesting. The different colors of the dice create visually appealing play, and the game’s graphic design is sharp and thematic, mimicking real blueprints. The rulebook is short, understandable, and to the point, and the overall packaging of the game is top notch.

Not up to building codes

For a game that demands dice randomization, the dice bag included is ridiculously undersized. The 32 dice barely fit inside it, and even with some dice pulled for the pool, that good, healthy shake for randomizing isn’t easy to pull off, and neither is fitting your hand inside to choose a new die for the pool. As good as the rest of the game components are, why Z-Man did not include a bag a mere 25% larger is a component choice I can’t fathom. Time to replace this loser dice bag with one of the hundreds of Crown Royal bags you have sitting around (hey, no judgments here, friend)—though you shouldn’t have to.

The other problem with Blueprints is not easily fixed, because it highlights a weakness in some players. While many people have no trouble scoring this game, others will stumble—often badly. It’s best to score one dice color at a time, but still, some people get confused, even with the outlined scoring rules right on their player shields. Then there’s the mathiness of adding die pips, calculating total numbers of borders for each wood die, and so on. Now add the tendency of some players to count out loud as they tally their dice, which throws off the counts of others. Slow talliers must also face the withering stares of those who figured their scores quickly, which adds pressure to go faster and increases the likelihood of scoring mistakes. At times it felt in the sessions of Blueprints I played that as much time was spent scoring (and rescoring when a mistake was made) as was spent playing other aspects of the game. This might be the one place where Yahtzee excels; its scorepads make it easier for players to track points as they go rather than juggle numbers in their head at the finale. A couple Blueprints players bad with numbers and with spatial visualization can make play feel more like awful than würfel.

And one philosophical observation…

Dice, by their nature, are meant to be random heartbreakers. In other words, roll them and hope to get that one needed result. Get it and rejoice. Don’t? Well, that’s what a facepalm is for.

Blueprints isn’t a rejoice or facepalm kind of game, though. The dice rolls don’t feel like makers or breakers. For this reason, a little of what makes a dice game fun isn’t there. The replacement for that lack is added thinky-ness. Whether that swap appeals to you will determine whether Blueprints is your kind of dice game or not.

With so many dice fests now flooding the market, where does Blueprints stand?

Darned few dice games ask players to do anything other than to roll them bones. In this regard, Blueprints’ building mechanic is unusual. In games where players get their own dice, many players fiddle between turns by stacking those dice anyway, so why not turn a nervous habit into a game? At least designer Tourigny gets points for attempting something different.

But is Blueprints different enough?

Amid that plethora of dice games, Blueprints is better than most. I would certainly rather play it than Zombie Dice, Farkle, or Can’t Stop. That said, if I had my choice of ANY dice tosser, I’d probably lean instead toward King of Tokyo, Seasons, or Escape: The Curse of the Temple.

With its different dice types and building mechanic, Blueprints definitely ousts the venerable Yahtzee. It’s a worthwhile purchase for any gamer seeking a small, inexpensive, würfel-icious game that plays deeper.

Or should that be 3D-per?

Blueprints takes the dice-rolling, set-making, and strategy of Yahtzee, but to a new, exciting level: up. Build 3D structures with dice, score points as the best architect, and enjoy a light, fun game that works great as a filler between heavier games.