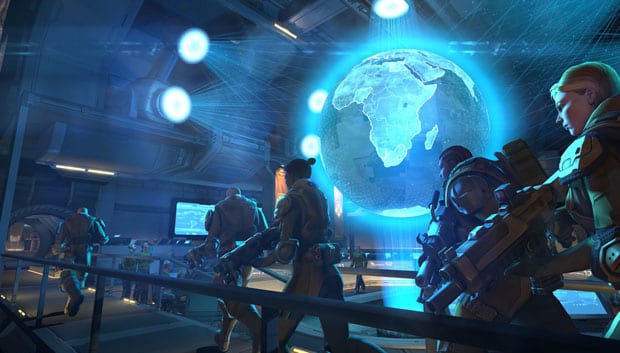 Most people’s eyes tend to glaze over at the mere thought of turn-based strategy games. Take your turn. Wait for the enemy. Move your guys around. Attack. Wait. Yawn. The very nature of how they’re played doesn’t exactly give an image of high-octane thrills and excitement. Couple that with micromanaging resources, troop directions, and complex system layered on top of complex system, and you have a recipe for a game that only the most ardent of spreadsheet fans will enjoy. So you can imagine my surprise that, after booting up Firaxis’ XCOM: Enemy Unknown, I was treated to one of the most white-knuckle, tense, and thrilling games I’ve played this year.

The setup is simple: aliens have invaded Earth, and are wreaking havoc across the entire globe, blowing up buildings, abducting people; you know, typical alien stuff. The nations of Earth have gathered their resources to create the “XCOM Project,” a super-secret underground base tasked with defending humanity from attack, salvaging any technology and resources available, and studying the alien menace. There’s a general story here, which provides some goals and milestones to complete that will further advance the narrative arc, but it never gets much deeper than just doing anything you can to defeat the aliens. Even though the general story beats are the same, the rest of the game is randomized, from what missions pop up, to your beginning squad, to your base layout. Map layouts aren’t completely randomized (level design is not procedurally generated so the design is always the same each time you play on a particular map), but enemy placement is, so you’ll always find yourself on your toes.

[singlepic id=9458 w=320 h=240 float=left]The XCOM series is notorious for being incredibly difficult, and Enemy Unknown is no exception. While you get a nice hour long tutorial which eases you gently into the mechanics of the game (something the previous games lacked), after that, you are on your own, loosed upon your mission, with the overall goals looming over you as your motivation to keep developing new technology and finding new ways of defeating the extraterrestrials.

In order to send these aliens packing, you’ll spend most of your time in two places: either in the field out on a mission, or back at your base, building facilities to help with general research and development functions, researching technologies to increase your battle readiness, monitoring your status with the rest of the globe, and waiting for alien activity. Everything you do comes with a time delay. Building a satellite? That’ll take twenty days. Ordering more troops? They’ll show up in about five. Each of these actions require you to advance time, and while waiting for building and research to complete, increasingly worse things happen on the globe, forcing you to decide which country you’ll go and save from invasion.

This becomes the overarching theme for the entire game: you cannot save everyone. While three invasions may be occurring across the globe, you can only take one of them, forcing you to decide which country is worth saving. Do you save Japan because they’ll offer you extra scientists for doing so? Do you save Canada because you’re strapped for cash and they’ll send you a few hundred bucks to rescue them? Or do you save Nigeria, not because they have anything you need, but because their Panic rating is getting close to five stars, which will cause them to leave the alliance and withdraw all of their support and funding from the project? You will never have enough time, money, or resources to complete every project, help every country, or build every upgrade, so you must decide whether you want to spend your money and resources on things like Interceptors to defend countries from UFO attacks, or if you want to take that money and invest it into gear for your troops, making them hardier and more effective in battle. XCOM: Enemy Unknown forces you at every turn to make incredibly hard decisions that you have to live with throughout the course of the game.

[singlepic id=9459 w=320 h=240 float=right]Extending onto the battlefield, you are constantly presented with different choices, and one wrong move can mean the difference between edging out a victory and swift defeat. Battles occur in turns, with each unit having an opportunity to move and attack, or take an extended movement phase. The “fog of war,” a shroud which envelops the parts of the map that your troops cannot see, prevents you from getting the drop on your foes, requiring you to move carefully from cover to cover until you spot a group of enemies. Overextend one of your troops out too far, or end a turn out of cover around the aliens, and you might as well say goodbye to that guy. Death is permanent in XCOM, so losing a solider on the battlefield means losing all of the accumulated skills and experience he brought to the team, requiring you to pull rookie from your bench, who are not nearly as suited for combat as your veterans. If the rookies survive, they’ll level up and gain new skills, but you want to keep a hold onto every troop as long as you can, only accepting casualties as a last resort.

Just when you think you’ve got a handle on the mechanics, just when you think you’ve got good enough equipment, just when you start to feel complacent, XCOM throws you a curveball, introducing new bad guys and mission objectives to keep you on your toes. These guys are nasty too, and will absolutely ruin your day if you’re not careful. One particular example are the chryssalids. These guys look like they’re straight out of Starship Troopers, have huge movement range, and can kill your guys in one stab of their razor-sharp claws. If you think that’s bad, the troops that they kill come back to life after a few turns as mindless zombies, and begin attacking you. Oh, and if you don’t kill the zombie quick enough, another chryssalid will burst out of his chest, ready to eviscerate another one of your squad members. The game is constantly taunting you, daring you to take down yet another seemingly insurmountable obstacle, which makes scraping out a victory from seeming defeat that much more glorious.

[singlepic id=9460 w=320 h=240 float=left]XCOM has a wonderful sense of theme and place. All of the aliens look menacing while still maintaining that 1950s Roswell-esque design motif throughout. Enemy Unknown makes wonderful use of the Unreal 3 engine with tons of little touches; a river trickles through a forest, reflecting the sun off it, your troops run on treadmills in between missions at your base, cyberdiscs unfold into giant Swiss army knives of death. Each of these moments inform the larger whole of the game, immersing you into this dire situation, making you grow attached to your troops (even more so if you choose to name and customize them after friends and loved ones), giving each death that much more weight behind it. Effects sound distinctly futuristic and otherworldly, and voice acting, while mostly average, only adds to its charm with the hammy delivery and hacky accents.

There is a lot to chew on during a campaign of Enemy Unknown, and each run-through will take around 20-30 hours. Because of how random the game is, along with multiple difficulty levels, and the inclusion of an Ironman mode — which limits you to one save file per game, autosaving after every turn, forcing you to live with every single decision you make — there are a ton of reasons to jump into another game after finishing the first run through. There’s even a multiplayer mode that, while interesting, doesn’t do much more than pit two sides in tactical combat against each other, dropping the meta-game altogether. Over all, Enemy Unknown combines Civilization’s board game-like endless replayability mentality with the trappings of a story-based single player game, and it pulls the combination off almost flawlessly.

[singlepic id=9461 w=320 h=240 float=right]I say almost, as there are a few things which keep this game from being perfect. When you stumble upon a group of aliens on a map for the first time, rather than catching them unawares, they get, essentially, a free turn to move into cover. It makes things a bit harder than they need to be, as you will never get the jump on anyone as you make your way through a map. Also, there are a few weird bugs and quirks with the controls. I played Enemy Unknown on a PC, and while a mouse and keyboard work fine, the game was obviously designed with a controller in mind. Controller input works great, actually, and is incredibly intuitive, but not everyone who games on a PC will have one available, requiring them to use the sub-par mouse and keyboard combo (I never thought I’d say that about a PC game). Also, there are some weird clipping issues with shooting through or around cover, or enemies falling through walls during attack sequences. On one map I was able to get 85% shot accuracy on a guy through a massive rock formation. Hooray for me, but it was a bit odd. I also had to reload a save game after a large grouping of enemy corpses bottlenecked around a doorway, preventing me exit through the only pathway to the final room of the map. Reloading fixed the problem, but it still stood out to me. All of these complaints are nitpicks, though, and shouldn’t deter anyone from picking up the game.

Firaxis has taken the lessons they’ve learned from Civilization Revolution and have streamlined the entire XCOM experience to make it more accessible and engaging than ever before. While die-hard purists may balk at certain changes, omissions, or a general decrease in overall complexity, they’d be missing the point. By stripping away all of the excessive micro-management and over-reliance of numbers and statistics most turn-based strategy games tend to fall back on, Enemy Unknown focuses more on the moment to moment decisions, giving each choice gravity, and letting you feel the consequences of every single wrong step. This is the Demons’ Souls of 2012: a difficult, unrelenting, unforgiving gamer’s game, one which rewards learning from failure and overcoming impossible odds. Even if you don’t like strategy games, if you love action games and have an open enough mind to try out something a bit slower-paced, you will be rewarded with one of the most thrilling, thought-provoking, and heart-pounding games of the year.