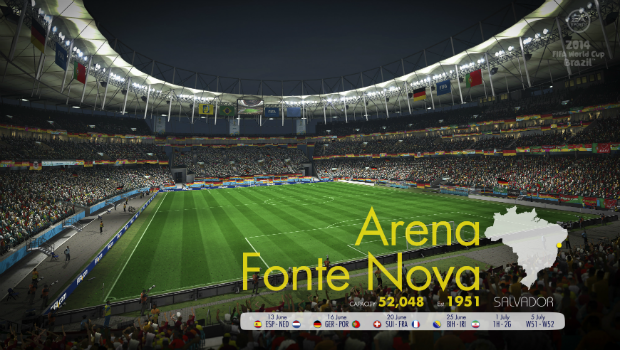 Forget any other tournament you’ve ever seen in your life, be it the NCAA Basketball or the Unreal.  There is no tournament that carries the perfect balance of sporting greatness and true national pride like the FIFA World Cup.  With the upcoming World Cup to be hosted in beautiful Brazil, home of many footballing triumphs and all-timers, there is promise that the games will be some of the very best ever.  EA Sports tries to capture the pride and magic of the FIFA World Cup in their licensed soccer game FIFA World Cup Brazil.  Using the physics and much of the gameplay dynamics of their wildly popular and successful FIFA series, FIFA World Cup Brazil succeeds in being an excellent soccer game but does not succeed in establishing why it must be bought as a companion game.

With the focus of FIFA World Cup Brazil on the World Cup event itself, there is absolutely no football club representation in the game.  In lieu of club teams, World Cup Brazil allows players to choose from any of the 203 national squads, from mighty Spain down to diminutive Macau.  Players can choose to control an entire squad through the rigors of pre-qualifying on through the tournament in Road to the FIFA World Cup, or can choose to play as a single member of the team in Captain Your Country.

Captain Your Country allows you to create a player and mold him, much like other Be a Pro modes, but takes the ability scores out of the player’s hands and puts them on a sliding scale based on performance, which allows for much faster development and realistic reflections of your player’s ability.  The Captain Your Country mode as a whole isn’t as deep as other sports games Be a Pro modes, but the inclusion of the sliding scale method of ability scoring makes it the most enjoyable by far.

If online play is more your thing, there are a few creative options that EA has provided.  There is the standard online tournament play and there will be a scenarios mode named Story of Finals once the actual games begin that will allow you to relive some of the great moments.  The big kahuna, however, is the awesome Road to Rio de Janeiro mode.  Players can pick any national squad and then play against other online players.  Win your matches to move up through the cities of the tournament on your way Rio.  Each city represents a level, so losing can mire you in the same city of even see you relegated back one.  A very fun idea that mirrors the very event it is celebrating, this Road to Rio de Janeiro mode is a work in progress but a very cool idea worth trying.

If you’ve played the most recent FIFA game, you already are aware of the amazing physics that the game provides.  FIFA World Cup Brazil is much of the same brilliance.  Player speed, movement, and ball control are all judged precisely based on location and momentum, and the effects provide extra control when you need it (deeply entrenched in the box) and takes it away when you don’t deserve it (while dashing in a mad sprint).  The ball no longer magnetizes to a player, and can often be stranded on the field for seconds at a time if the majority of players are too unskilled or impeded to get to it.  The defense has to react to the ball quicker and more smoothly, as tackles are no longer so easy to win without proper placement.  Passes are crisper and easier to pinpoint, and shot taking is no longer a laborious estimate of how hard to strike the ball.  Difficulty comes almost entirely from the play on the field rather than from lack of control, and the difference between a very good player and very poor player is much more noticeable, both with teammates and opponents, than in most other sports games.  The end product is a wonderful game that works 99.9% of the time and rewards you for getting better.

The look and feel of the game is also very impressive.  Menus and in-game atmosphere all carry a very patriotic feel based on what country you are from (or choose ironically).  The soundtrack is a very European friendly mix of pop tracks and electronic dance music, but it is enjoyable and a nice mix of fresh bands with little exposure.  The game also provides two options for EA Radio, one being the more classic style of Andy Goldstein and Ian Darke, or the more podcast-esque style of the brilliant and funny Men in Blazers.

The only real drawback of the game is that it really doesn’t set itself apart as a must-own game for anyone other than rapid World Cup fans and football game collectors.  There is little reason to run out and get this title if you already own FIFA 14, as you mostly have the same game already in a different packaging.  That certainly isn’t a wrongdoing by EA by any stretch, but the fact of the matter is this feels much more like a little brother to the big FIFA series rather than a stand alone, must have game.

FIFA World Cup Brazil is a excellent meeting of the near perfect FIFA franchise from EA and the very perfect FIFA World Cup event. Brilliant physics and gameplay, beautiful look and feel, great music and announcing, and a nice selection of gaming modes makes for a very complete and successful game. The Captain Your Country single player mode and the intriguing Road to Rio de Janeiro online tournament both represent forward thinking in sports titles. While there is little for fans of the Premier League or other national leagues in a title like this, World Cup fans are greatly served, and anyone with a love of soccer would be wise to pick this title up and attempt to blaze your nation’s trail to world dominance.