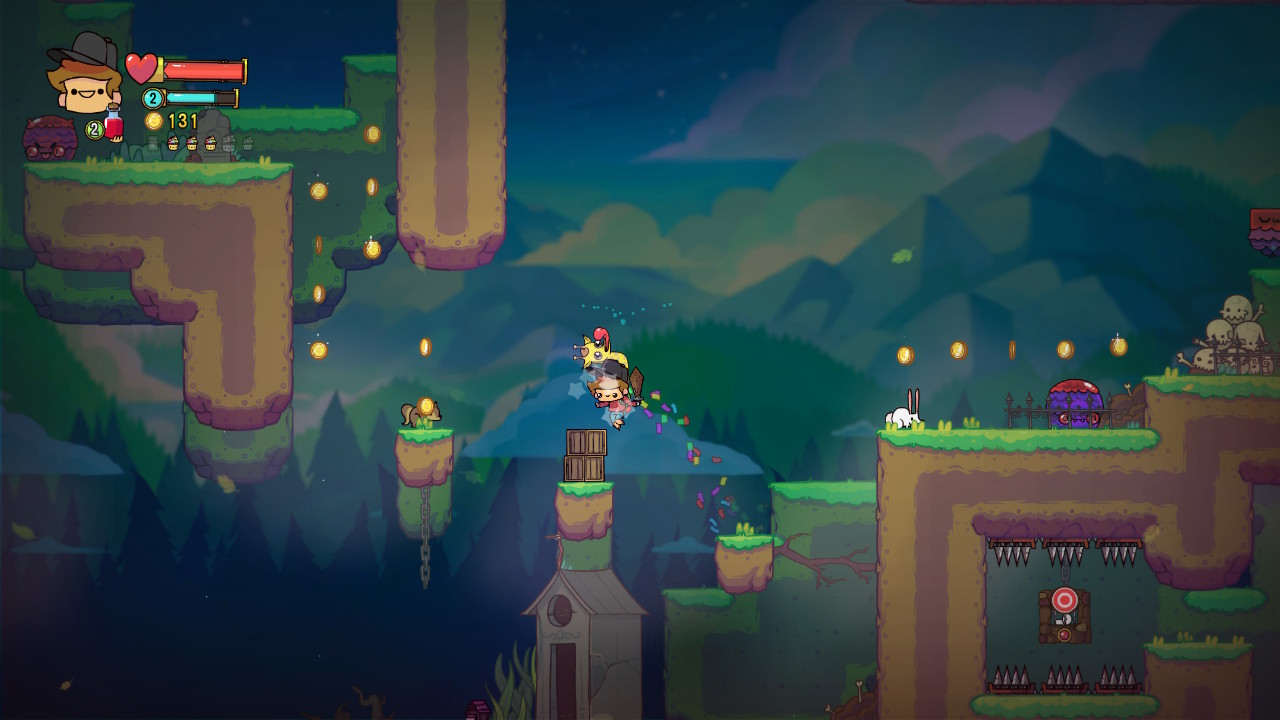 And of course, you will be graded on your performance.

First of all, The Adventure Pals is incredibly responsive. The game teaches you the mechanics quickly, such as running and jumping, but everything changes when you meet your new pet giraffe, Sparkles. While you can jump normally, Sparkles has the ability to use her tongue (yes, that’s right, her tongue) to allow you to glide down slowly. This is an incredibly useful mechanic as wall-jumping becomes much more satisfying through using this ability to climb higher.

I admit, this one was pretty clever.

There are total of five worlds to complete, with levels with 5 sections found throughout the world. Almost all of these sections adds something new to the gameplay, introducing it in a stress-free environment before mixing it with the rest of the objects. By mixing in these abilities gradually, it never felt overwhelming and the difficulty curve felt fair.

Notice the laser-bee-hotdog. I knew he was dangerous because he started to charge it before he fired.

Unfortunately, the level design isn’t perfect. Each section contains a cupcake to find (come on guys, you were so close to “McGuffin Muffins”) and every five of these cupcakes will give you a new hat or a new costume for Mr. Rock, another one of your pals, at random when you talk to the fat cat of the land, the Cupcake King. These cupcakes are fun to find, but they aren’t ever in a difficult location. The path to the well at the end of the section could be hidden behind similar corridors as the cupcake, which caused me to backtrack several times when I thought I found the hidden path.

The arenas can be difficult at least, especially when supplies become limited and enemies swarm your platform.

Another thing this game could have done better is how it tackles combat. Most of the enemies can be defeated by mashing the attack button. There are occasional enemies that require disarming a shield or stepping back, but almost everyone is taken out with a good round of thwacking. The more enemies you beat, the more you can level up and earn more abilities. These are just minor conveniences such as grabbing coins from farther away, but it still feels nice to earn them. Unfortunately, there aren’t many additions to combat as you go along.

This means that the bosses left something to be desired as well. Instead of strategically attacking the boss, you have to wait until the right time to attack them, following a pattern of avoiding attacks. These felt like an anticlimactic end to a world building up to something great at end of each story.

Sure, the tree looks happy. But he still has a very punchable face.

Each story the world creates ranges from interesting to hysterical. One of the world’s features a pirate election, where quests are given to help aid the pirates running in the campaign to become captain. One pirate has her “rootbeer” stolen and you must find it. Of course, all of these quests just unlock levels and are completed by running through the level normally.

I think that’s a person, Wilton.

Despite its flaws, The Adventure Pals is still a solid indie platformer. Nothing about the enemy placement felt unfair, the movements were quick and snappy, while lackluster in most places, taking out large groups of enemies in the arena is satisfying. There’s even the addition of co-op, which is just a recolored second player to follow you along with the same abilities. As the second player lags too far behind, they’ll spawn to your location.

While levels may feel stale later on and combat could be better, The Adventure Pals is still a solid platformer with tight controls and an incredibly imaginative and humorous world that is more than worth checking out for its price.

Sean Anthony likes to combine two of his passions: gaming and writing. Gaming has been a huge part of his life ever since he played his first game as a child, Kirby's Adventure. He aspires to have his name attached to an article that makes the whole world go, "Huh, that's neat, I guess."
Related Articles: Indies, The Adventure Pals
Share
Tweet
Share
Submit