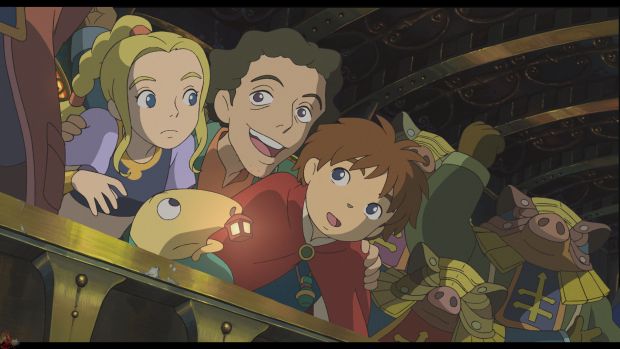 It’s hard to recommend Japanese role-playing games to people who aren’t already well-versed in their bizarro game logic. JRPGs typically take forever to get started, are filled with repetitive combat grinds and innumerable back-and-forth fetch quests, and the same, played-out “17-year-old with amnesia’s gotta save the world” story line. Hell, even I have had a hard time trudging through them recently, and I was raised on a steady diet of Square Enix SNES and PlayStation era RPGs – the very genesis of all of these tropes.

So I was surprised when I first heard about Level-5’s Ni no Kuni: Wrath of the White Witch. Here was going to be a game that surpassed all of the genre stereotypes, that would make me fall in love with JRPGs all over again.

And in a way, it worked. Its charming veneer sucked me into a world that I enjoyed immensely. But the more I spent in the “Another World,” the more that polish started to rust. And it seems that, for everything I find great about Ni no Kuni, there’s one little issue that bores its way to the forefront of my mind, until I’m reminded of exactly what I had gotten myself into – yet another JRPG.

[singlepic id=10959 w=320 h=240 float=left]Ni no Kuni: Wrath of the White Witch makes a fantastic first impression. With an art style directly created and influenced by Studio Ghibli (Spirited Away, Ponyo), this aesthetic shines throughout the entire experience. Character development, monster and environment design – everything has that trademark Ghibli whimsy to it, and everything truly looks like a living, interactive cartoon. Even the soundtrack was fully composed by Ghibli mainstay Joe Hisaishi, lending even further credibility to the “anime-as-game” feel Level-5 was going for.

When the story first opens, we’re greeted by Oliver, a lovably innocent kid, who suddenly has his whole world ripped away from him. Luckily, his favorite stuffed animal is also Drippy, Lord High Lord of the Faries, who whisks Oliver off on a grand adventure – not only to save this other world, but also to possibly save his own.

And, sadly, that’s really the extent of the story development. Oliver will travel far and wide to save his family, and free the other world from the titular wrath of the titular white witch, and he’ll meet many colorful characters along the way. Other than some interesting diversions here and there, there really isn’t much more to the plot than the initial overall set-up.

What Ni no Kuni lacks in plot, it more than makes up in detail and back-story. Oliver carries around a large, leather-bound Wizard’s Manual, and as he finds pages for the book, he’ll learn new spells and gain more information about the world he’s traveling through. These pages aren’t only for unlocking new abilities, they’re fully readable and show that Level-5 has put an incredible amount of attention to this world.

The little details help to highlight the quality of Ni no Kuni’s production values. Voice acting is well-done, even though the accents tend to shift from American to British English and back again. I personally want to meet the man who gave life to Drippy and shake his hand, as he single-handedly provides the backbone for the entire game. Animated cutscenes are hand-drawn by Studio Ghibli, and look gorgeous.

[singlepic id=10960 w=320 h=240 float=right]But then, while the voice acting and animated cutscenes are great, Ni no Kuni frontloads its best stuff. After the first few hours, you’ll spend most of the game reading the reams of dialogue, with maybe a sentence or two of actual voice acting sprinkled throughout – which only serves to highlight how much of the game is completely silent. It creates a rather jarring disconnect between the first few hours and the rest of the game.

As a budding new wizard, Oliver will learn dozens of spells over the course of his journey. One of the most important spells he’ll learn is the ability to take and give heart from the various citizens he meets. Various people have been made heartbroken by the evil of Shadar and the White Witch, and in order to cure them, Oliver needs to find the proper emotion from someone who has an overabundance of the lacking emotion – a exuberant fellow can provide enthusiasm for someone who is feeling blue, for example. It sounds like a neat idea for a puzzle, but Drippy will always tell you the proper emotion you’ll need, meaning that it becomes nothing more than a simple fetch quest.

Ni no Kuni is filled with these sorts of seemingly pointless fetch quests. Oliver will go back and forth across a city, running from scripted sequence to scripted sequence, with virtually no input from the player. Or he’ll run from one city, all the way back to one he’s been to before, then back again, just to find an item and progress the story. It takes a good ten hours before Oliver even gains the ability to catch more of the monsters and fill up his arsenal of controllable familiars. Its pacing is distinctly JRPG – and some could consider it plodding – but it never gets as bad as other games (like Final Fantasy XIII) whose mechanics are slowly drip-fed over the course of forty hours. Those looking for a faster game, however, will become frustrated in the way Ni no Kuni doles out its new concepts and mechanics, and if it weren’t for the game’s charm and aesthetics, I might have packed it in as well.

[singlepic id=10961 w=320 h=240 float=left]Luckily, the battle system is much more frenetic than the overall pacing of the rest of the game. While battles aren’t random like most JRPGs, whenever Oliver makes contact with an enemy on the field, he’ll find himself on an enclosed arena, where he’ll do battle against the myriad monsters that populate the world. Battles play out in real-time, with cool-down timers that punctuate the use of different abilities and AI partners filling out the rest of your squad. They tend to be brisk affairs, with the occasional drawn-out battle if Oliver doesn’t have a familiar with the right elements or abilities.

While you’ll rarely have to grind for experience points, you’ll be fighting over and over again – so much so that even Joe Hisaishi’s music will start to get old after awhile. And while the frantic pace makes fighting fast and exciting, you’ll actually have very little control over what your teammates can do, and until you learn an absolutely crucial ability – an ability you won’t unlock until after about fifteen hours – your AI partners will get clobbered time and again. Even after you learn these abilities, if you don’t pay attention to your familiar’s elements and the elements of the enemies you’re fighting, battles will get very difficult, very quickly. For a game filled with such childlike wonder, Ni no Kuni revels in its old school sensibilities.

And that’s really the ultimate criticism about Ni no Kuni – that underneath Studio Ghibli’s charm and influence lies the skeleton of a genre that’s been around for decades, and still hasn’t evolved all that much. And if it weren’t for Ghibli’s art direction, it would be just another JRPG. It isn’t for everyone, and it’s definitely not the game that will convince you to pick up a JRPG if you’ve been avoiding them for this long. Even so, I find myself entirely entranced by Ni no Kuni, and I’m willing to look past its flaws as I return to its magical, whimsical world.

It isn’t for everyone, and it’s definitely not the game that will convince you to pick up a JRPG if you’ve been avoiding them for this long. Even so, I find myself entirely entranced by Ni no Kuni, and I’m willing to look past its flaws as I return to its magical, whimsical world.