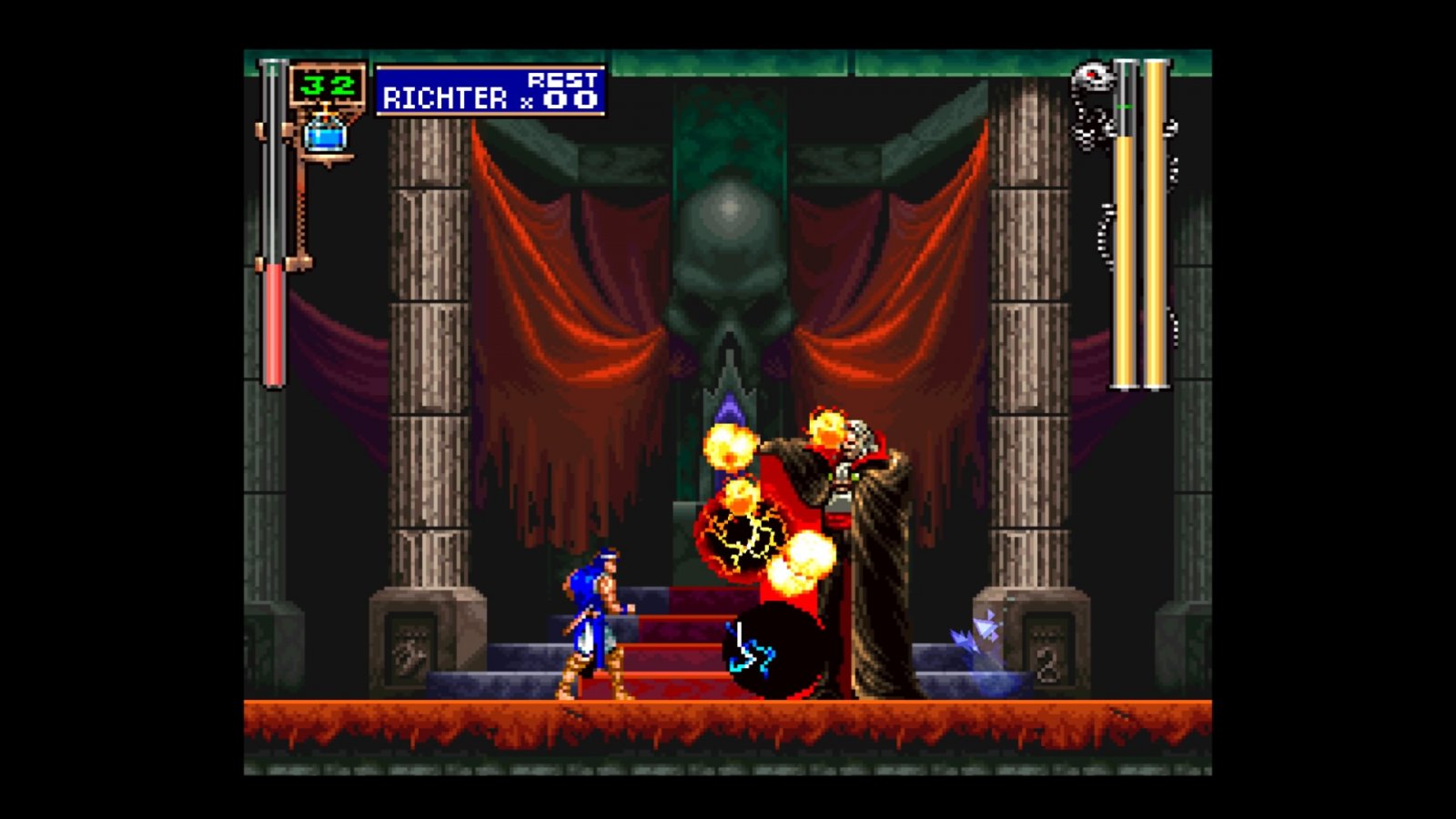 Some classic games can be played over and over without losing their luster, some should be returned to once in a while to remember what makes them great, and others live better in memory. While not without their flaws, the two games contained in Castlevania Requiem: Symphony of the Night & Rondo of Blood clearly belong in the former camp.

It’s best to get this out of the way early: Although Castlevania Requiem adds only the barest updates to its 20-plus-year-old games, the anthology is a must-have for Castlevania fans. It puts two of the series’ best games (and arguably two of the best games ever made) on a modern console in one package. While that’s certainly enough for anyone who already knows how great these games are, or who has been dying to play the otherwise elusive Rondo of Blood, the package’s complete lack of bonus content does nothing to either reward Castlevania diehards or entice the unconverted.

Castlevania Requiem may be the most barebones classic games anthology ever released. It features ports of the two titles and — that’s about it, aside from a smattering of audio-visual options. You can change the voice track from Japanese to English, choose between normal and full-screen scaling, and pick a wallpaper to fill the gaps left on the edges of your screen by the games’ 4:3 aspect ratio. On the slightly more advanced side, you can also enable scanlines, interlacing, and pixel smoothing effects. Your mileage may vary, but I thought all of these options looked terrible. There’s a certain retro charm to the scanlines, at least, but on a large screen, it loses its effect and simply dulls the image, while the pixel smoothing option just makes the game look slightly out of focus. The interlacing option is bafflingly bad, turning your screen into a flickering strobe light. With all of these options turned off, however, both games look great.

As far as the games go, the only real change is the tragic excision of Symphony of the Night’s famous confrontation with Dracula that dares to answer the question, “What is a man?” Both the script and the voice actors have been replaced for the game, and while they’re no better than the legendarily hammy performance from the original, they’re far less entertaining. Voice acting notwithstanding, both games contain their original soundtracks. They’re both fantastic and a fascinating example of how top-tier video game music changed in the four years between their release dates.

Fortunately, the games look better than this menu.

Other than that, you just get an incredibly ugly menu and two great games. Symphony of the Night, the most well-known of the two, is still an absolute blast to play. Originally released in 1997, it’s a direct sequel to 1993’s Rondo of Blood. As one of the games that popularized the Metroidvania formula (and the term itself), it will also feel incredibly familiar even to those who’ve never played it. Playing as Alucard, you run and double-jump your way through Dracula’s castle, mowing down thousands of fishfolk, possessed mannequins, balls of corpses, and other inexplicable houseguests. Along the way, you’ll acquire new equipment and abilities, which will help you dispatch these monstrosities more easily or open new paths to explore.

Being one of the genre’s progenitors, Symphony of the Night isn’t quite as advanced as a modern Metroidvania. Progressing through the castle usually means finding a locked door then coming back once you’ve found the correct key, rather than using interesting abilities to reach previously unreachable places. There are relatively few ways to interact with the world, and combat is more about skillful dodging and slashing than managing a suite of abilities. You’ll find some magic spells and fun consumable items along the way, and the whole game packs far more depth than it originally seems to. You can view Symphony of the Night as being entirely about secret paths, hidden mechanics, and obscure relics. Uncovering the secrets of Dracula’s castle is challenging and rewarding, with each one providing mechanical benefits along with the thrill of discovery. Traversing the castle to reach far-flung places you’ve already been to can feel like a bit of a chore after a while, but exploring new areas is always a joy.

It can be quite jarring to go back and forth from Symphony of the Night to Rondo of Blood. The former feels great to play under any circumstances, with its responsive controls and slick movement, but it will be the smoothest feeling game you’ve ever played if you boot it up right after Rondo of Blood.

While not necessarily slow-paced for its time, Rondo of Blood is a deceptively methodical platformer. You can’t expect to just run through whips a-blazing and triumph over evil incarnate. Instead, you’ll have to take the time to study your opponents’ attacks and slip in at just the right moment to deliver a killing blow. This is made orders of magnitude more difficult by protagonist Richter Belmont’s maddeningly slow movement speed. For a man being beset on all sides by supernatural horrors, he stays remarkably blasé, unwilling to even break into a trot when his life depends on it.

Get used to this screen. You’ll be seeing it a lot.

The same can’t be said for Belmont’s enemies. Even the simplest adversary can cut you down if you get clumsy or impatient, and they’re able to cover a tremendous amount of ground in the time it takes you to swing your whip. This is doubly true of bosses, who can assault you from all sides with lunging melee attacks and projectiles. Beating Rondo of Blood is no small feat, requiring both nerves of steel and preternatural reflexes. Overcoming its challenges is extremely rewarding, but the difficulty will certainly turn some people off. It also relies on an archaic extra life system that sends you back to the start of the level after too many deaths. Get used to the Game Over screen — you’ll be seeing it a lot. It may be heresy to say, but I wish the game had included an option for a modern checkpointing system to make repeated attempts at its bosses easier to stomach.

Either in spite of or because of its difficulty, depending on pain tolerance, Rondo of Blood is still absolutely worth playing. It shows its age much more than Symphony of the Night, but it’s still a great game, and pretty innovative for its time. Levels are chock full of hidden routes that you can open by finding hidden switches or sometimes just jumping into pits. This makes it extremely replayable, as you can essentially play an entirely different game by mixing up the paths you take. You can also unlock a secondary character, Maria, through a fairly arcane process early in the game that you might just want to spoil for yourself. Far from just a reskin of Richter, Maria is much nimbler and has an entire set of her own abilities that makes playing her a vastly different experience.

There’s no reasonable way that Konami could have screwed this anthology up, which explains why it’s nothing but a direct port of two games. It’s disappointing that this release is completely bereft of extra content, but Castlevania Requiem is still the best way to play these two undisputed classics today.

Castlevania Requiem: Symphony of the Night & Rondo of Blood

Castlevania Requiem: Symphony of the Night & Rondo of Blood does the bare minimum, but it’s still well worth playing. While there are no extras included in this anthology, the two games it contains are some of the best ever made, and one of them has been pretty difficult to come by until now. Aside from the replacement of Symphony of the Night’s wonderfully campy voice acting, both games are delivered in perfect shape and are still as worth playing today as they’ve ever been.

A committed indoor kid, Bryan moved from Pittsburgh to Los Angeles for a prettier landscape to ignore. They can be lured outside with promises of taco trucks and film festivals, and enjoy trawling through used book stores for works on the occult. Bryan has been gaming since the SNES era and is a sucker for good pixel art.
Related Articles: Castlevania Requiem: Symphony of the Night & Rondo of Blood
Share
Tweet
Share
Submit