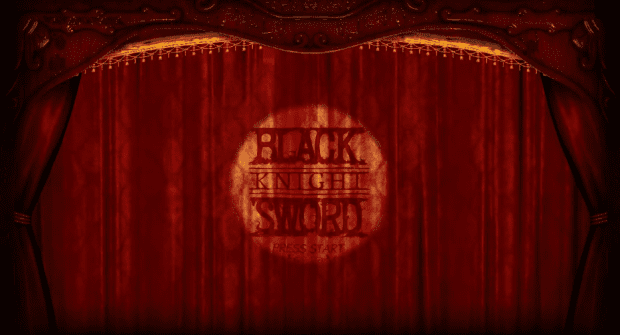 Suda 51, and to a larger extent, Grasshopper Manufacture, are responsible for some of the most crazy, what-the-hell-did-I-just-play games in this console generation. No More Heroes and Shadows of the Damned prove that Grasshopper is capable of marrying its grindhouse/punk-rock aesthetic and Japanese eccentricity with solid game design, creating nonsensical – but nevertheless, entertaining – video games. Black Knight Sword is Grasshopper Manufacture’s latest – a collaboration with Hungarian developer Digital Reality. Together they’ve created a throwback to the sidescrolling games of yesteryear. It sounds awesome in theory, but it relies so heavily on its weird premise to carry the game forward that it seems to have left the actual gameplay behind.

[singlepic id=10145 w=320 h=240 float=left]The first thing players will immediately notice is Black Knight Sword’s off-kilter presentation. Red stage curtains part as the developer logos splash on the screen and rather than fading away, they become a fixed part of the border. The entire game looks and feels like a low-rent puppet show, complete with whimsical sound effects – whistles, horns and the like – and paper cutouts that wouldn’t look out of place in a grade school diorama project. The whimsical graphics and sound effects, juxtaposed with enemies that squirt buckets of blood and haunting stories that introduce each stage — vignettes that would make the Brothers Grimm’s blood curdle — all add up to make Black Knight Sword feel like a nursery rhyme gone horribly, horribly wrong.

Black Knight Sword is essentially a sidescrolling game in the vein of 8 and 16-bit classics like Castlevania or Stryder. Moving always to the right, the Black Knight will take on scores of the most bizarre demons and monsters – broad-faced heads on wings and on legs, horses on springs, wolves, obese knights, and more – each one dropping hearts when defeated. Picking up these hearts allows the Knight to upgrade his life bar, refill his health, increase his magic power, or buy armor.

[singlepic id=10146 w=320 h=240 float=right]Black Knight Sword stumbles mostly due to its strict adherence to old-school design sensibilities. The Knight has some magic powers and a few special attacks learned after the defeat of each of the level’s bosses, but he’ll rely on his basic slashing attacks most of the game, making combat nothing more than dodging telegraphed attacks and mashing the attack button. Overall level design is interesting enough, but that may be more due to the unique art design more than any actual gameplay. Moving and jumping remains as rigid and stiff as the original 8-bit Castlevania games, and cheap hits and missed jumps are the rule, not the exception. Power-ups and health refills are sparse, as are the hearts required to upgrade the Knight’s abilities (at least, compared to the amount required to buy them), and it’s actually wiser to just lose a life during a boss and respawn than it would to spend the hearts to refill the health bar. Or, it would be if not for the way upgrades actually work.

Any upgrades made to the Knight’s abilities only last as long as the player can stay alive; after losing all of his lives, the Knight’s health and magic upgrades are removed – as well as any accumulated hearts – while level progress is saved. This means that the player may make it to the fifth and final level, but if they’ve lost all their lives at any point, they will have to tackle the cliché old-school “boss rush” – fighting every single boss from the previous four levels in a row – with no upgrades. The only way to beat the game is to essentially perform a perfect run through the game, making its brevity a relief rather than a detraction.

[singlepic id=10147 w=320 h=240 float=left]Which is sad, because the stage-show aesthetic is brilliantly done. Levels constantly shift as the Knight runs forward; the cartoonish fires, vehicles, animals and other bits of scenery in the background all move like they’re being hoisted up by Popsicle sticks while the foreground morphs into different theater sets. Rather than opening treasure chests for power-ups, microwaves burst open after being pelted with sword slashes. A disembodied voice narrates the Black Knight’s quest to defeat the White Princess in a rather creepy British voice, but he speaks dialog for both male and female characters – and whatever the hell that giant thing with the mouths is – and raises his inflection appropriately. There’s even a part where the Black Knight rides a giant chicken in a Gradius-styled “shmup.” It’s so delightfully macabre and nutty and different that it makes the gameplay tropes it borrows from that much more glaring.

Not even the bizzaro brain of Suda 51 can save static gameplay and cheap deaths. It’s a shame, because the premise and art direction are rather inspired, but it’s hard to keep pressing forward when actually playing the game is not. Fans of Suda 51’s work may be able to look past the numerous flaws present here, but ten dollars is a lot of money to spend on frustration and the desire to play something, anything else.