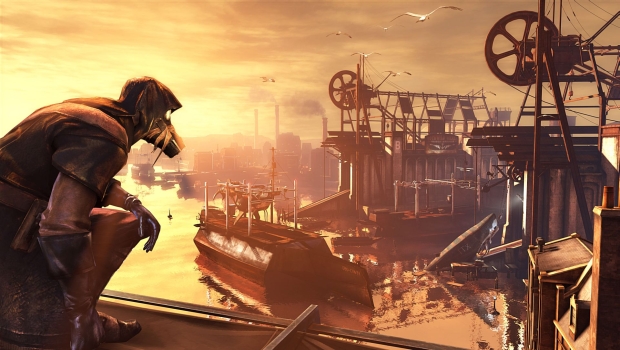 Dishonored holds a pretty honored place here at Gaming Trend.  It was a finalist for Game of the Year 2012 and I scored it a 93%.  That was over 190 days ago – a lifetime in videogame development.   While we did get a nibble at the DLC apple courtesy of Dunwall City Trials, it served only as a few somewhat interesting missions, eschewing the compelling story for several thematic challenges.  Fans wanted more than this – they wanted the prototypical return to the soft boots of Corvo Attano.  The team at Arkane are back at it with exactly that – a new single-player adventure, only we won’t be returning to our dark hero, but instead stepping into the shadows of the Master Assassin Daud – the man who killed Empress Jessamine Kaldwin and kidnapped her daughter Emily.  You are the Knife of Dunwall.

“Ego homini Lupus” (“I am a Wolf to man”)
The magic of Dishonored comes courtesy of choice.  Leaping headlong and loudly through the front door is as viable an option as stalking through the vents and never harming a soul.  The powers in the game only expand that, giving you a chance to leap to unreal heights, take possession of an animal, or even control time itself to slip past enemies unnoticed.  These powers are granted by the Mark of the Outsider, giving Corvo incredible skills well beyond that of a normal man.  Only a small group of people have been touched by The Outsider, and Daud is one of them.

[singlepic id=11096 w=320 h=240 float=left]The original design document for Dishonored sported almost double the powers that eventually shipped with the final product.  Some of these powers have made it into the hands of the leader of The Whalers as Daud gains the ability to summon fellow assassins and increase their power.    Unfortunately, this comes at the cost of other powers including Windblast, Possession, and Devouring Swarm.  While Dark Vision gets a rename (Void Gaze) it functions almost the same.  There is a huge change that that you may not recognize if you’ve been away from the game for a while – when Daud casts blink, time stands still.  As long as you aren’t doing it on the move, the world will shift black and white, enemies will stop in their tracks, and Daud will then teleport with brilliant speed, precision, and unparalleled stealth.  The team at Arkane have spent a great deal of time on the level design for two of the three levels (one level is a repeat of an area we have already explored), granting Daud far more vertical exploration than Corvo ever had.

One power in particular does give an interesting twist to The Knife of Dunwall – Summon Assassin.  Corvo’s adventure was all but a solo affair, but Daud is frequently flanked by friends.  Being able to summon an extra set of fighitng hands at will gives him a bit more flexibility in his approach as that assassin will fight, distract, and otherwise create openings for Daud to quietly (or loudly) complete his objective.  Obviously all of this blood on your hands will have an impact on the ending, so this power may have to stay in your pocket for your inevitable pacifist run.

Beyond powers, Daud carries a few more goodies than Corvo.  While you still have powers to turn enemies to ash when you kill them, it’s handy to be able to lay Arc Mines down to accomplish the same thing should an enemy tread across it. Much as the name implies, the Chokedust grenade gives a similar approach, but without the lethal impact. Some of the new enemies are all but invulnerable from the front, so using the Chokedust gives Daud a chance to escape should things go sideways.

All of these powers and toys come together once again to grant our protagonist the opportunity to traverse the environment in interesting ways, but it is the lore that will motivate you to seek out new and interesting ways even after you’ve played through the three new levels.  As before the guards will jabber constantly about things mundane and important, but as this game interleaves with the first, you’ll also hear them comment on the actions of Corvo – a cool way to tie this together with the main product while helping the player invest in Daud and his motivations.  Unfortunately they also tend to repeat as often as they did in the main game, though this is more of a nitpick than anything else.

“Delilah”
I’ll leave it to you to discover the motivation of our Master Assassin, but without revealing too much let’s say that The Outsider sets him on the path towards someone or something named “Delilah”.  It’ll take you a good six to eight hours to discover exactly who or what that is and why it is very important.  As before you’ll have an opportunity to choose the light or dark path, once again granting redemption or further descent into darkness.[singlepic id=11097 w=320 h=240 float=right]

The biggest steps on the dark side come from killing, only time time around the enemy is more straightforward.  Butchers, fat-cat Whalers, Aristocrats, and things far darker than any weepers prowl the landscape.  Corvo may have had to contend with the denizens of Dunwall proper, but Daud tangles with the most dangerous prey – man.  The new enemies in the game are as dark hearted as any in the main game.  Like Daud himself, they are treacherous and vile.  I have no doubt that this was done on purpose as bait to lure you towards the darker path.  As it stands, the third level is enough to make you turn towards wanton slaughter anyway with a more straightforward and less stealth-oriented design – one of only a handful of disappointments I have in this pack.

Much of what made Dishonored great is intact here, but it’s surprising that there weren’t more changes given the vantage shift.  Corvo tracked down his runes using a mechanical heart, but also had a chance to snag some whale bone charms to further augment his powers.  Daud doesn’t possess the heart, nor does he use runes, but you can still collect the charms and to the same effect.  These are still random, granting a little bit of health or mana for completing an assassination, or granting other small power buffs.  Corvo could have his allies upgrade his weapons for coin, and Daud has similar opportunities in between levels.  Blueprints to grant other upgrades (i.e. explosive bolts) also make an appearance.  So much of this remains unchanged – I would have figured this as an opportunity to give Daud a completely new experience, playstyle, and perhaps some new mechanics beyond the minor tweaks presented here.  Given that our $9.99 is only giving us the first half of Daud’s story, perhaps we’ll see additional changes as more of the story unfolds in The Brigmore Witches slated for later this year.  When you think that the original game only had 9 levels and this is 1/3 of that, it makes a ten dollar price easy to swallow.

“I don’t know about you, Corvo, but I’ve had a lovely time.” – The Outsider
[singlepic id=11098 w=320 h=240 float=left]Don’t take these minor nitpicks as anything but exactly that – minor.  If you enjoyed Dishonored you know exactly what you are in for here.  Much of it is the same, but it is the exemplary gameplay mechanics and fascinating world that drew us in the first time.  Daud’s story is a slow burn, and right about the time it has you hooked you’ll be at the end of Knife of Dunwall.  Even serving as an appetizer for the next DLC it still features two endings (high and low chaos ratings), as well as an additional difficulty level for those who want a bit more challenge.  Two out of the three levels are completely new and at least, if not more engaging than the main game.  The third is only less so as it’s somewhere we’ve already been.  While Knife of Dunwall may be familiar territory, it’s territory I’ll gladly tread once again.