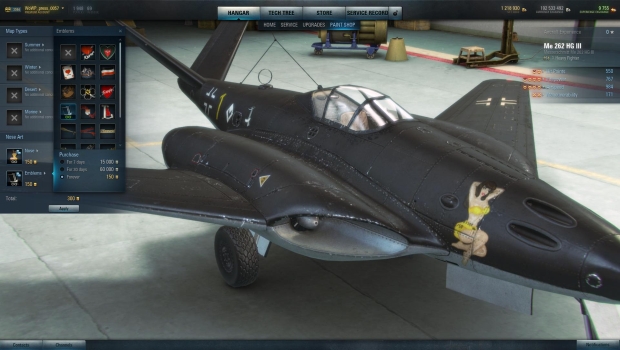 There are 75 million people registered in World of Tanks, with 1.1 million peak concurrent players. Let that number sink in – 75 million is more than any MMO on the market by a very wide margin. Recently updated to version 9.1, World of Tanks is going strong, with most players logged in for nearly 4 hours a day. Given that the game is free to play, these numbers are staggering. The team at Wargaming.net weren’t content to simply sit by and enjoy its continued success though – they decided that the logical next step was dominance by both air and sea. With World of Warships sailing towards testing late next year, we’ve finally seen World of Warplanes leave the hangar. It’s time to close the cockpit and see if this bird can fly or she falls out of the sky.

As is the case with World of Tanks, World of Warplanes is free-to-play. Players start with a handful of planes, with new planes unlocked with experience or with gold. Gold is what pays the bills for Wargaming, as do Premium Accounts. Each battle earns you a bit of gold and experience, but having a Premium Account earns you an additional 50% of both. If you are the type that has more money than time, you can use gold to purchase new planes immediately and to your hearts content. I would caution you against this though – you’ll die far far more often this way.

In World of Tanks, it is very easy to find players who have bought their way to the top – their behemoth tanks are smouldering heaps of slag. In World of Warplanes it’s even easier to spot them as they are usually killed before anyone else. In both cases, not taking the time to learn your vehicle and buying your way to something faster and more powerful will leave you behind the helm of something you can’t effectively control. It is better to learn your craft, honing your skills behind the stick and spending your gold when you want to splurge for a new toy or some sexy nose art.

World of Warplanes, as does Tanks, starts players in biplanes that predate World War II. For us old schoolers that cut our teeth on Wings from Cinemaware back in 1990, biplanes fit like an old pair of boots. Staring off in a Boeing P-12 biplane, you’ll quickly find yourself graduating to a Grumman F2F before you move up to fixed single wing aircraft like the Curtiss Hawk 75M. Before long you’ll move upwards to the P-51D Mustang, the P-51H Mustang, and even into early jets like the F-86A Sabre, and that’s just on the American side. In all there are American, British, German, Japanese, and Soviet planes numbering over 200 in total. Each of them are assigned hit points, firepower, airspeed, maneuverability, and weapon payload that varies wildly between all of them.

Many of the planes in World of Warplanes are real and saw combat in theaters around the world. What’s better, though is that this game also gives players the chance to get behind the stick of planes that never made it to the battlefield; or better yet, never made it past the drawing board.

Obviously in a tank you’ll have a crew of several soldiers to load, drive, and man the turret. In World of Warplanes, players will instead have pilots that can ramp up skills in eight areas. Skills like Stamina helps keep the support crew alive with additional health. Increased sight range lets you spot enemies from a further distance, and fire fighting lets you put out fires on a plane even without a fire extinguisher. Once you’ve mastered two of these three skills you can select another skill that can make you a better shot with guns, bombing runs, engine repairs, or even additional stability in damaged aircraft. These crew members are assigned to the particular aircraft but can be reassigned, though they do lose a bit of proficiency in the process. You can spend experience or gold to skill them back up, or grind your way back up the old fashioned way.

In both of Wargaming’s titles you can build your way up to nearly anything you want without spending a dime. I say “nearly” as there are some vehicles in both games that are only available to Premium accounts. You would think that these would be vastly overpowered vehicles, but surprisingly they are not. They are indeed powerful, but not in such a way that they unbalance the field. Where you will spend most of your hard earned cash is in consumables.

After combat you’ll need repairs, but you’ll also need to refill your ammunition belts. You’ll also have a chance to throw in some goodies to help in a pinch, such as a fire extinguisher or first aid kits. You can also also equip items like self-sealing fuel tanks and armored plexiglass to keep your plane in the sky. Furthermore, you can reinforce the airframe, swap out the engine, new guns, and outboard weapons like wing-mounted bombs. In short, there are a lot of ways to build an incredible plane without the need to constantly jump to the next fighter.

Tech Trees are the lifeblood of advancement in World of Warplanes. There are three types of aircraft to unlock – fighters, heavy fighters, and attack aircraft. Early planes are, at best, fragile, and heavy fighters are brutal but slow. Attack aircraft are more speciality planes, giving players aircraft that are capable of carrying incredible armor, rear guns, and heavy bombs. Even with 200 aircraft in the mix, somehow each plane feels vastly different than the last.

All of the mechanics and advancements aside, it’s all about what happens in the sky, not the hangar. Wargaming spent a great deal of time with this game in Beta, and the reasons were obvious – finding the right balance between accessibility, arcade, and simulation is tricky. Despite its balanced gameplay, there’s something you’ll need to realize up front: you are going to die. Not unlike Dark Souls, you can expect to get shot out of the sky quite a bit until you skill up. Those brittle early planes are the crucible, and you’ll be thrown in it repeatedly. Should you be shot down (and you will be) you can watch as a spectator, or you can head back to the hangar and unleash hell with any of your other fighters on another server. As your plane is upgraded and your skills improve, you’ll die a little less, until you are finally earning your stripes in battle like a proper pilot.

World of Warplanes is made more accessible due to a plethora of control options. World of Warplanes supports mouse and keyboard, a flight stick, or an Xbox 360 controller. Additionally, there are a great deal of adjustments you can make to the keyboard and mouse controls to further approximate that of a flight stick, though there is no substitute for an old Thrustmaster or Saitek stick in battle. These simplified controls combined with a fairly forgiving physics model is enough to give players a challenge, but not tip it over into the flight simulator niche. Like a fighting game, picking the hardest hitting fighter is not necessarily going to guarantee victory. Nimble fighters with little armor but speed to spare grant maneuverability over heavier fighters, but if that heavy trains her pair of 7.62mm P-V1 cannons on you, you’ll likely have only a few moments to ponder what just happened as your plane careens towards the ground in flames. Knowing your craft and her capabilities will earn you far more victories than simply flying the best money can buy.

There are a few issues in World of Warplanes, one of which that should self-resolve over time. There are ten tiers of fighter craft in total, and game queues are split in this fashion to prevent jets from cutting biplanes to ribbons in short order. Given that the game has only been out for a few weeks, there are few people that have fought their way up to the higher tiers. This means if you grind or buy your way up, you’ll likely be waiting for everyone else to catch up. As the game matures, we should see more players in the higher echelons.

The second is one that would require a bit of work on Wargaming’s part. You are encouraged to take on the training with coin and experience, but that training is only presented inside of a biplane. As you move into more advanced aircraft you’ll be on your own to learn them. There are solid tutorials for beginners as well as advanced players to help bring them up to speed, though nothing will prepare you for combat like the fire of conflict.

There are two ways to win in battle, though I’ve yet to see one of them occur. You can take out all of the enemy fighters to end the battle, or you can assault the enemy base and bomb it into oblivion. Air battles rule the day, with few players bothering to equip bombs to bother assaulting the other side’s land structures. Without systems like Clan Wars from World of Tanks, players engage each other in aerial deathmatch until the last man is standing. I suspect that the game will inherit some of the advanced features from Tanks over time, encouraging players to coordinate attacks and introducing more variety organically.

I do have to commend Wargaming for the netcode in World of Warplanes. Sharpened on the whetstone of World of Tanks, this title is capable of hosting 30 fighters easily without a hiccup. I did not see a single game where lag was a factor or my ping rose above 100ms.

World of Warplanes is flying in familiar skies as World of Tanks launched in a similar state - a solid foundation on which Wargaming built the most successful MMOs in existence. From beautiful airplane models and solid sound work, to a very accessible flight model that works for any skill level, World of Warplanes is a worthy successor for Wargaming’s stable of titles. It does need a bit more time in the hangar, but you can’t beat the price of entry.