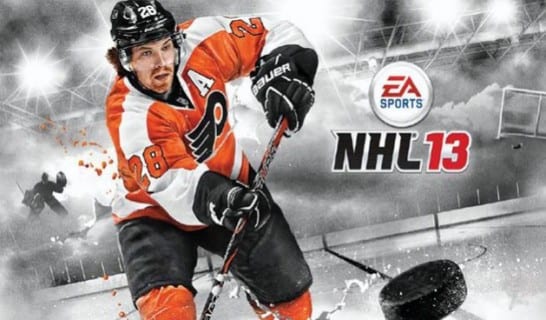 Those of you who read the site know that I’m not an avid sports gamer, so I did the best thing I could think of – invite some real fans over to hit the ice.  I don’t know what got into EA’s coffee, but it’s clear they wanted to shake things up a bit for their sports title, and NHL 13 is just one of several titles that received a complete makeover from the ground up.  Like Madden 13 and FIFA 13, the engine was the first thing to get an uplift, and while all of the features of the previous title are still present, there is a pretty huge difference.  Would NHL 13 get the solid reviews that Madden 13 got, or would it get an icy reception?

“Every Stride Matters”
Heavy hits, checks against the boards, power plays, picking the pocket, and winning faceoffs are no good if the skating portion of the game doesn’t work well.  The animation system in NHL 12 was one of the more frequent complaints, sometimes referred to as ‘laughable’ or ‘broken’ in several reviews, though the overall game earned respectable review scores.  EA Canada went back to the drawing board for NHL 13 to bring us a completely new skating engine they are calling “True Performance Skating”.   Based on over 1000 motion-captured animations, the new system looks to bring three things to the table – momentum, speed, and explosive power. On paper, explosiveness refers to how fast a player can skate quickly, speed refers to mapping real-life skating speed to the on-screen player, and momentum is everything to do with players being carried by their speed, and well…momentum.  In game this means the faster you are moving forward, the harder it’ll be to turn.  It also means that you’ll have trouble slowing down in a tight high-speed turn, your speed may make you overshoot your target, and you can now execute high-speed breakaways like never before.  Not only will you see your player swing a wider arc, you’ll also get a slight rumble from the controller to remind you that you are likely trying to pull a turn at too high a speed.  Since the skate speed is based on real-world player stats, knowing your player and his capabilities is critical.  Having faster players flying in from all sides to take the puck is a much more likely scenario than ever before.  When you couple the new speed with an upgraded collision system for both players and pucks, you’ll see far more shots bouncing off of other players, and more players bouncing off the walls.  The other thing you’ll likely see is something that Matt and I encountered; with him as a veteran and me as a rookie, I was able to skate circles around him – his previous experience was killing his game.

[singlepic id=7848 w=320 h=240 float=left]With the new engine, you’ll have to think more about steering your players and dealing with the reality of momentum.  No longer can you stop on a dime and then explode in a completely opposite direction without slowing down to execute the changeup.  Similarly, you are now able to skate backwards at a high rate of speed, allowing you to push around players on the offense and snap the puck away from the other team. This also allows you to jet tightly around the net and drop a wrap-around shot into the goal.  On the defensive side, backwards skating can give players a chance to defend the puck more than the head-on work from last year.  Gone is the ability to snap a turn to shoulder a player much larger than you to the ground – you’ll be learning a whole new game here.

Similar to the previous title, the tutorial mode is available for different elements in gameplay, including such skills as handling the stick during faceoffs, checking, shot targeting, and more.  Picking your targets, aiming your shots, and putting another player into the boards works very similarly to NHL 12, but when combined with the new physics engine, the game is truly changed.  Using your explosive power and slamming into another player to put them into the boards can make for some amazing and cringe-worthy hits.  With the physics bump, the checking feels more real, and it makes more sense when players that take too many hits and limp off the ice.  There were some moments during our review playtime that we did see some odd hits that had players reacting in a seemingly-scripted fashion or falling at impossible angles. You’ll also see this in when players are filing into their box as the animation gets a little ‘jerky’.  While it isn’t perfect, it goes a LONG way towards making for a more realistic representation of real hockey.[singlepic id=7852 w=320 h=240 float=right]

“Hockey is Murder on ice” – Jim Murray
Speaking of representation, there is a great deal of graphical improvements on top of the new skating guts.  The first thing I noticed is that there is a nice upgrade in the overall lighting engine.  Rather than the odd 8-way shadows that were meant to approximate overhead lights, the new engine now renders shadows more accurately across other players, are broken up by player movements, and move realistically with player position related to overhead lighting.  Nowhere is this more apparent than on player helmets and on fresh ice.  Light reflects from the smooth ice surface earlier in the game (though later on as the game progresses, your team logo is likely to look a little roughed up thanks to the procedural ice scuffing) and closeups on player helmets give realistic surface reflections.

[singlepic id=7851 w=320 h=240 float=left]The lighting, the accurately-captured arenas, the post-FX work including the work on the uniforms, helmets, and the players themselves all come together to create a stunning package. The framerate isn’t as solid as one would like, but it seems to affect more side activities than anything that happens on the ice.  Going back to the 1000-animation motion capture system, there is bit of jerkiness in the animation, though admittedly less than we saw last year.  We also ran across an odd bug during testing where fading back from presentation moments to the game the screen would say dark for a little too long, sometimes making it difficult to succeed in a faceoff.

Speaking of faces, based on seeing it make the cut in Madden 13, I’m surprised that Game Face hasn’t made it’s way to this franchise.  The question becomes whether or not we’ll see it in NHL 14, or if focusing on the inevitable next-generation of platforms will take precedence.  With that said, I was surprised given the graphic fidelity and accuracy of player faces that the Be a Pro mode offers up.  It looks like it is using Speed Tree technology, so you end up with what is essentially a Skyrim face in a sea of accurately-represented professional faces.
“There are so many things that happen on the ice that beg … explanation.” – Bill Clement
Returning veteran commentators Gary Thorne and Bill Clement handle the play-by-play and color commentating for NHL 13.  Football is a little slower paced, giving a better opportunity for a more scripted commentary, whereas hockey’s action can turn on a dime multiple times in a single minute. The folks at EA Canada have done a fantastic job managing to capture all of the action on the ice without skipping a beat.  The play-by-play and the color commentary are well delivered with only a little bit of repetition.  Better approximating a real hockey game, you’ll get highlight reels on the players periodically.   In one of the games we played we intentionally roughed somebody up from the opposing team – something both the commentators and the crowd chastised us roundly for.

On the ice, the sound effects are spot on.  Players taking heavy hits against the boards, the sound of icing as you cut to a stop, and the sound from the crowd helps make a solid audio experience. We did run into an issue where the audio cut out after a goal horn for about 30 seconds, but it only happened in one game.  On the other hand, all three of us that were working on this review had to agree that the soundtrack was painful.  Hockey staples that you’d hear at every game are present (though the game has a real preference for Kernkraft 400 from Zombie Nation) and are bolstered by tracks from Anti-Flag, Battleme, Foxy Shazam, Monster Truck, The Hives, The Offspring, and Shinedown to name a few.  If the bulk of those artists don’t sound familiar, you’re not alone in that thought.[singlepic id=7849 w=320 h=240 float=right]

“In over my head” – Ron Burke
NHL 13 has a nearly overwhelming number of modes for a more casual player like myself.  In fact, the more hardcore players like my invited guests were a little drowned by the new GM Connected mode. This new mode allows up to 29 other players to essentially run the backend of this sport from soup to nuts.  Trades, finance, tracking via a mobile app, and managing your team down to the stats of an individual player (puck skills, shooting, physical, defense, skating, and senses are all ranked and tracked) are all present and accounted for in this mode.  For players that have aspirations of managing a professional league at that level, this mode will certainly scratch that itch, but for me I was in over my head.

In modes I could readily understand, we checked out NHL Moments Live.  This mode lets you take great moments from the 2011-2012 NHL season and try to recreate them or even change it.  EA promises that they’ll update this mode as the 2012-13 season progresses (provided we GET a season…stupid lockout) for players to enjoy.  In the aforementioned Be a Pro mode you can build your own player, including a much-requested feature from previous titles – being able to trade or retire at any point in your career.

“I’m still staggered at where we are” – Bill Clement
The game feels like a healthy upgrade and a new dawn for this franchise.  While there are still some minor issues that hold back NHL 13 including jerky animations and some odd bugs, but this is easily the best NHL title I’ve played in some time.   It represents a solid step forward that should capture new players and keep veterans on their toes.  The revamped physics engine gives a much-needed shot of realism to the franchise.  Given the iterative nature of sports titles, I’m excited to see what NHL 14 has in store for hockey fans.